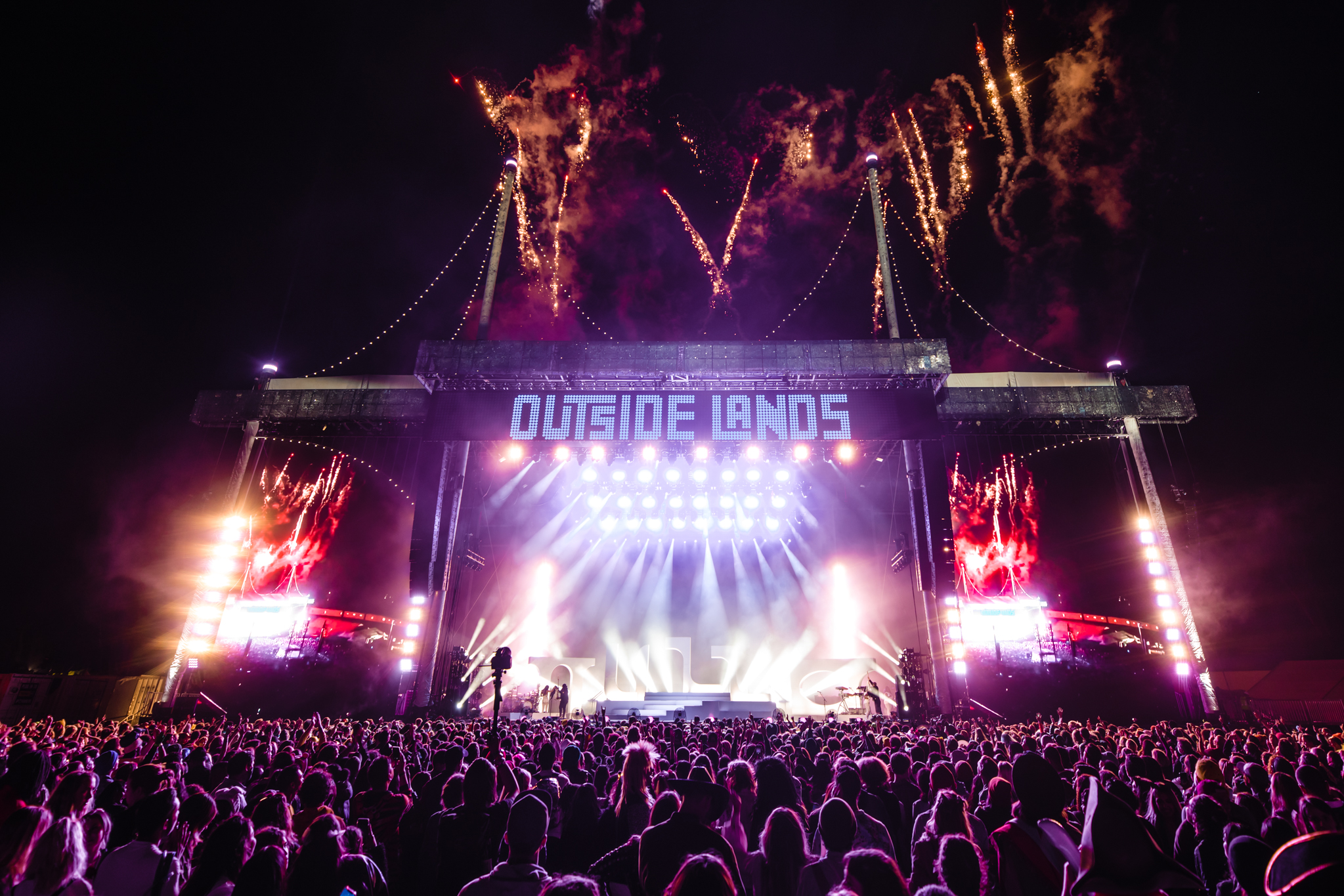 Last weekend, San Francisco’s esteemed festival Outside Lands made a huge return- marking the official restart of live music in the city. Taking place in the beloved Golden Gate Park, attendees got perfect weather amongst tree-lined stages for the three-day affair. For the first time in thirteen years, the festival took place over Halloween weekend- proving to be especially entertaining paired alongside the weekend’s jam-packed performances of all genres. Spanning across four huge outdoor stages properly named for the city’s landmarks (Lands End, Sutro, Panhandle, and Twin Peaks) and two partially indoor spaces (The Heineken House and SOMA Tent)- festival attendees of all backgrounds swarmed through the curvy streets of San Francisco to reach the sold-out event.

Friday brought about an enthusiastic feeling amongst both artists and attendees excited to return to the festival scene. The day was kicked off with high-energy performances from the likes of SF-local popstar Remi Wolf, hip-hop girl-boss 070 Shake, singer-songwriter Sharon Van Etten and even a sensational show from Mongolian throat-singing metal band The Hu. After nearly two years without live music in the city, many festival-goers came early to truly get the most of their first large-scale event back. As the sun started to set over Golden Gate Park’s rolling hills, the trees lit up with multi-colored lights to illuminate walkways and dance floors throughout the rest of the evening. Fan-favorite psychedelic rock band Khruangbin took over Lands End for a groovy golden hour set, followed up by an equally upbeat performance by Glass Animals. Over at the tree-lined Sutro stage, Chicago-based duo DRAMA brought all the necessary indie-vibes, succeeded by a dance-filled future bass set by SG Lewis. Friday at Twin Peaks focused more on rap programming, with huge names such as Yung Bae, Flo Milli, and EARTHGANG bringing some much-needed hype on the first day of the festival. The Soma Tent saw hard-hitting sets from Korean-American SOHMI, Germany’s Boys Noize, and techno-pioneers Mathame. The first night was closed out by a hard decision for all festival-goers: three huge performances from rap-icon Tyler the Creator, indie-rock sensations The Strokes, and dance-music mainstays Kaytranada.

Saturday proved to be just as high-energy as the day before, with an outstanding music line-up and a full day of drinks, food, art, and dancing. The early birds that made their way into the festival saw unmatched performances from American electropop band A R I Z O N A, indie singer-songwriter Andrew McMahon in the Wilderness, the ever-so outgoing Rico Nasty, rising-DJ Kyle Walker, and homegrown hip-hop artist Dijon. As the day moved on, huge acts took the reigns on each of the stages with eclectic sets from pop star Melanie Martinez, indie icons Dr. Dog, hometown hero Marc. E Bassy, experimental songwriter Bakar, the beautiful songs of Angel Olson, and a last-minute performance by Aminé. Energetic DJ sets from UK’s Cloonee and French-born Shiba San took over the SOMA tent, followed up by fan-favorites Walker & Royce and Hot Since 82. The night was polished off with a crazy span of artists including the upbeat discography of Vampire Weekend, pop legened Lizzo, folk staples Lord Huron, and a heavy-hitting closer by Bay Area local ZHU.

On the last day of Outside Lands, attendees came dressed as their favorite ghosts and ghouls for the festival’s first-ever Halloween celebration. Creativity shined as festival-goers came in with matching group costumes spanning from superheroes to the festival’s mascot “Ranger Dave”. The holiday brought a whole different level of excitement going into the final day- which arguably was many festival-goers favorite of the three. Sunday opened up with standout performances from electronic-pop band Neil Frances, LA-based Goth Babe, FEMMEHOUSE founder LP Giobbi, American rap legend Nelly, the ever-so vibey Boy Pablo, dance-music pioneer Green Velvet, and trap music’s best Troyboi. As the sunset over the grassy knolls for the final time, huge international artists filled every stage across the park for a bittersweet conclusion to the three-day celebration. Australian electronic superstars RÜFÜS DU SOL played a heart-warming closing set at Lands End, succeeded by an unmatched performance by psychedelic-rock legends Tame Impala. DJ and producer duo SOFI TUKKER brought down the house at Sutro, followed by Bay Area beauty Kehlani. Twin Peaks saw an incredibly special closing set from J. Balvin who took the accolade as Outside Land’s first Latin act to headline. Other highlight closing sets by jungle wizard Nicola Cruz, techno-crossover Maya Jane Coles, and electro-pop’s The Egyptian Lover tied together a perfect weekend in the Fog City.

Aside from the peak musical programming over the weekend, Outside Lands offered drink and culinary options from every Bay Area foodie’s dream restaurants. Within the festival were appropriately-dubbed drink tents such as Beerlands, Winelands, Cocktail Magic, and Coffeelands. The food options brought world-class fare from local Bay Area favorites such as Bun Mee, Curry Up Now, El Garage, Mensho Tokyo, and many more. For those wanting to learn how to make international cuisines at home, attendees could visit the Gastromagic stage. Here, world-famous chefs joined internationally-acclaimed musical artists on stage as they cooked adventurous foods together. Highlights of this stage were Roy Choi & Rico Nasty making dumplings, Beignets and Bounce with Brenda’s French Soul Food and rapper Katey Red, and pastries with Elizabeth Falkner and Albert Hammond Jr. from The Strokes. Grassland’s presented by Eaze returned for the third consecutive year as the first curated cannabis experience at a music festival. Featuring an on-site dispensary, cannabis-themed demos, conversations, and performances- Grasslands has become a staple at the festival. Amongst all of the offerings and next-level music programming, Outside Lands maintained its commitment to sustainability by providing recycling, compost, and trash bins throughout the festival. Eco Lands brought education and awareness for festival-goers at its very own tent.

With another successful year under its belt, Outside Lands remains one of California’s most sought-after festivals for all genres of music. Bringing festival-goers of all different backgrounds and music styles, it is truly a community of fun-loving individuals at the beautiful Golden Gate Park. The festival will make its return next year from August 5-7, 2022. For more information visit www.sfoutsidelands.com.