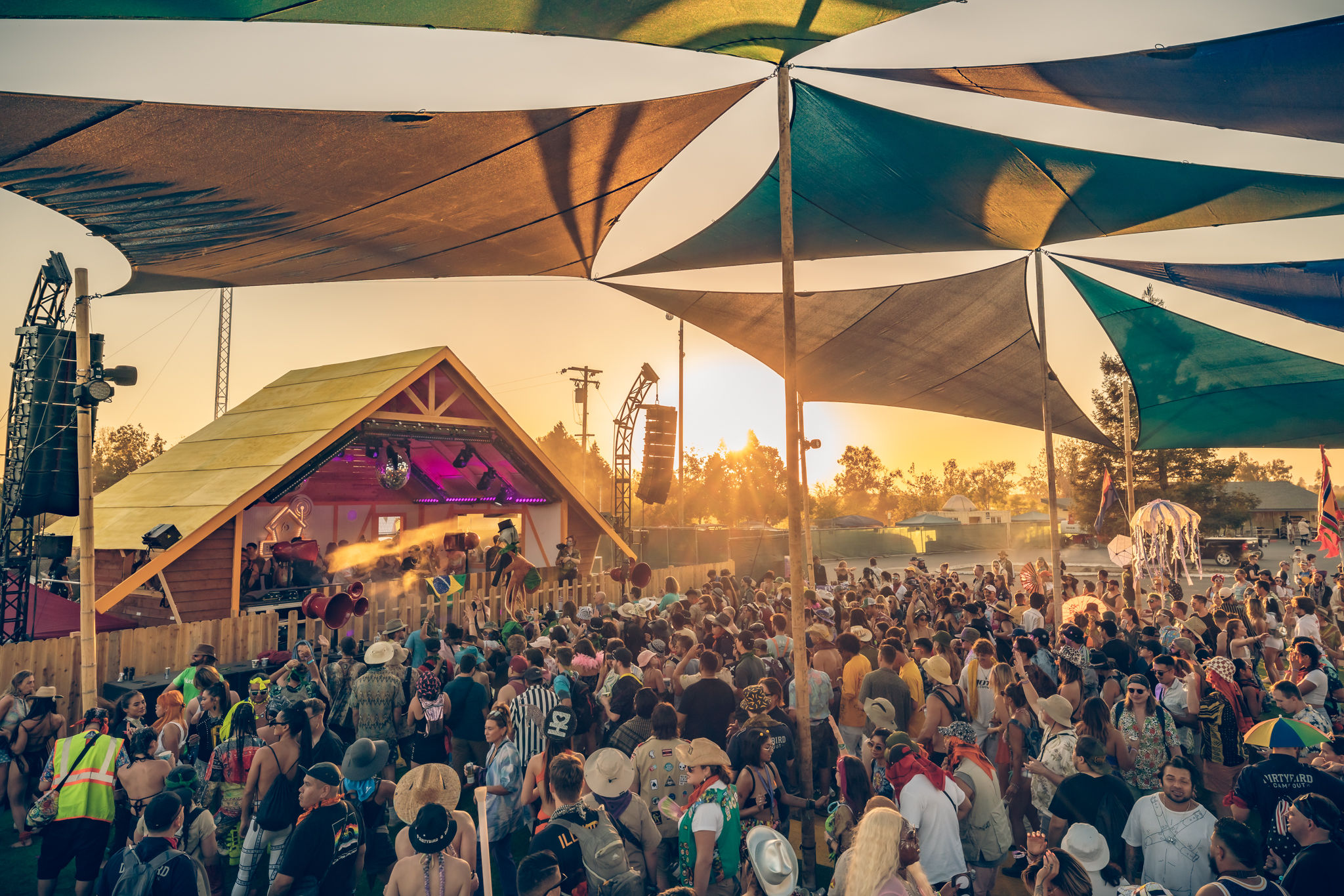 Last weekend, legendary house label Dirtybird Records wrapped yet another successful festival celebrating the eccentricity and talent that encompasses their community. Featuring huge performances from industry icons and rising stars alike, the weekend highlighted some of dance music’s most influential DJs and producers. Alongside the top-tier programming, attendees got separated into color teams all weekend to compete in lively summer-camp-themed games. From talks and shows at Claude’s Cabin, next-level sets at Bird House and the Bass Lodge, all-weekend activities on the Field, creative projects at Craftopia, and groovy performances at the Roller Disco- there truly was something for everyone over the course of Dirtybird Campout.

Claude’s Cabin was a home base for all things crazy over the four-day festival. From morning meditation and yoga, a drag show, spelling bee, stand-up comedy, and dance classes- campers could come to the Cabin at any hour of the day to learn new skills and get some laughs. Many surprises popped up at this stage, one of the craziest being the Late Night Bingo Revival, where campers played for an astonishing reward. Claude himself handed off a real sailboat to the winning camper, topped off with a limousine of groovy go-go dancers to help hand off the prize. The Field hosted all of the camp-wide team activities over the weekend, where campers fought to bring their color team the most points. The gaming epicenter offered group activities such as speed-walking, potato sack races, dodgeball, obstacle courses, and water-balloon tosses- all hosted by their favorite DJs as counselors. Amongst many bruised knees and a few sprained ankles,

Besides Claude’s Cabin, there were many destinations built for camper enjoyment beyond the music. The Field brought back everyone’s favorite childhood pastimes into camp-wide wholesome laughs. All of this led up to the Iron Bird competition on Sunday, which brought all of the teams together for one final face-off. For those wanting to get creative, Craftopia was home to all things artistic with free craft experiences for all. Under the shady trees, the craft tent hosted screen-printing, patch-making, tie-dye, self-portraits, and totem crafting for campers to take home. The Reservoir provided a much-needed cool-off space, with an open kayak and paddle-board time and a 5k Floaty Race through the heat of the weekend. Lastly, The Roller Rink hosted the weekend’s groovy late-night discos with rentable roller-skates. Exclusive sets from the likes of Harry Romero, Mary Droppinz, and the Fantastic Voyage crew kept the skaters moving under the lights until the early hours of the morning.

The Bird House proved to be the focus of the weekend when it came to programming, with huge sets from label mainstays and this year’s breakout talents. On Friday, daytime sets from rising star Luke Andy, LA-duo Arnold & Lane, and NY-based Codes kicked off the weekend’s celebrations. At night, the stage transformed into an eclectic lineup of massive sets from Worthy, VNSSA, Steve Darko, Claude Vonstroke, and Walker & Royce. Saturday brought about a special guest, DJ and producer Green Velvet took over the stage with his unique and heavy-hitting discography that remains unmatched in the industry. Following up the industry icon was Dirtybird newcomer Nala, Lubelski, fan-favorite Ardalan, and Cats’n’Dogz. Boys Noize closed out the evening with a heavy-hitting German-electro-meets-industrial-techno performance of the ages. The final day failed to disappoint with relentless acts from girl-boss Mary Droppinz, Berlin-based Kevin Knapp, Shaded, Chicago’s Gene Farris, and Sacha Robotti. The weekend was closed out with a high-energy family set, bringing together an insane b2b from all of the artists of the weekend.

Bass Lodge featured talented artists of other beloved genres from drum n’ bass, dubstep, indie dance, and rap- an example of the festival’s versatile programming compared to other California festivals. With quite literally something for everyone, this stage focused on the uniqueness that is Dirtybird Campout. The stage kicked off the weekend with a Thursday Pajama Party with performances from label-owner Claude Vonstroke and Day Zero founder Damian Lazarus. The rest of the weekend featured live sets from the likes of nostalgic Jacques Greene, Carl Craig, future-bass artist Medasin, DJ and vocalist Justin Jay, and Claude’s alter-ego Barclay Crenshaw. Also hosting the nightly silent disco, Bass Lodge proved to be a musically diverse but well-focused stage full of new talent and old.

Aside from all of the music and activities, Dirtybird Campout proved the positive future of the label paired with the huge return of live music and events. Being the first festival to require a negative COVID test (even with vaccination), the event proved its commitment to camper safety and the future of the industry. The label’s NFT’s sold out in a record of three minutes in the weeks prior to the festival. Therefore the Dirtybird Flight Club, the NFT owners, was treated to exclusive events and performances within the festival. To keep campers fueled each day, Campout brought unique culinary and drink options with exemplary brand partnerships. With tent, RV, and glamping experiences for all- this year was truly a camping experience to remember.

Every year, the Dirtybird team puts such a tremendous amount of heart into this festival, that it’s nearly impossible not to feel welcome there. Through the craziness of the camp games, late nights, and unmatched music performances- Dirtybird Campout is a bucket-list experience that you cannot forget. The future is certainly bright for both the label and event in the years to come.

Jamie Jones Took us to Paradise During NYC Three-Stage Takeover