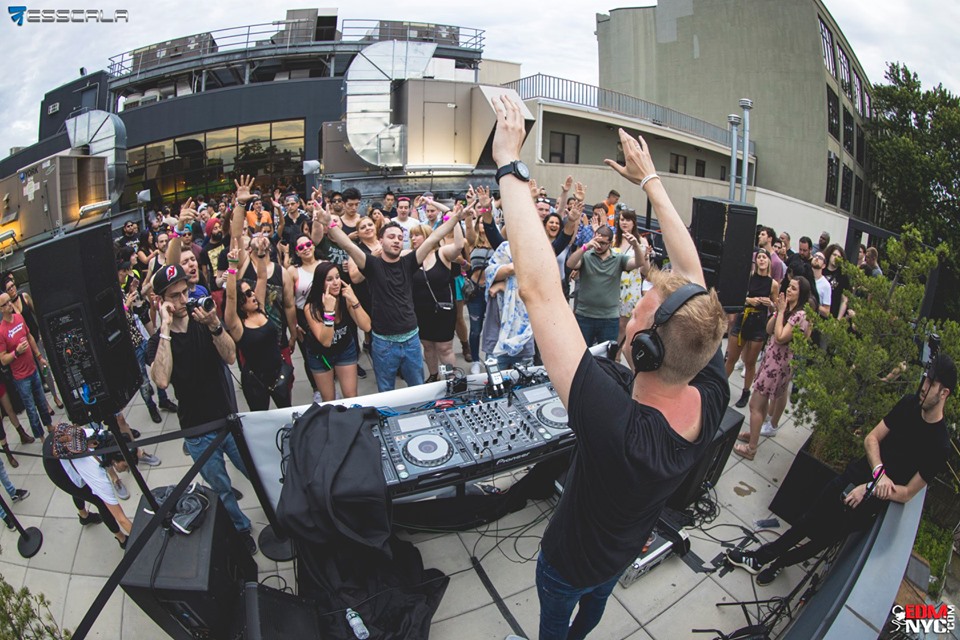 In case you haven’t kept up with the buzz surrounding Armada Music’s latest festivities, we’ve got you covered with some very special insights from a few of the key players themselves. Armada cohorts Ruben De Ronde, Rodg, and Elevven joined us in New York City ahead of a bustling weekend to share some of the hair-raising details of Armada Invites, Ruben and Elevven’s new collab “Lucky Penny,” and what brought them to the city in the first place – Esscalation Music Festival, all leading up to this coming weekend’s ASOT 900 Bay Area blowout.

Armada has very much earned its title as a critically acclaimed global brand in the dance music space. Branching off each year with new and innovative concepts, spin-offs, and sold-out parties, they’ve been able to successfully dominate the industry and offer up not only high-quality talent but top-notch events. The ‘A State Of Trance (ASOT)’ brand name as well as ‘Armada Invites’ have each built up the Armada army and secured a lifelong residence for the company as a whole.

The brand new Armada New York City office has kicked off a widespread extension of the highly-respected brand into American territory. With a growing roster of incredibly skillful talent, the label encompasses the largest dance music catalog and boasts artists both up and coming and long-established. From the likes of Afrojack, Andrew Rayel, Armin van Buuren, Fedde Le Grand, Gareth Emery, Lost Frequencies, Loud Luxury, Morgan Page, W&W, Zack Martino and more, Armada plays home to some of the biggest names in the game and only continues to rise from here.

A true representation of their global presence, the expansion of ASOT into U.S. territory with such a huge event as the one coming this week in California’s Bay Area remains a testament to the sweeping and dedicated fanbase that continually supports the imprint. Coming to the Oakland Coliseum on Saturday, June 29, ASOT 900 will stand as the largest ASOT gathering in the United States thus far. The celebration will also mark another momentous occasion, as Ruben De Ronde and Rodg will be performing beside each other for their joint venture, appropriately named Togetherr. Attendees can fully expect to experience a full-fledged dose of heaven as Togetherr, NWYR, MaRLo, Fatum, Armin van Buuren, and Aly & Fila are ‘Lifting You Higher’ into uncharted territory.

We had the pleasure of visiting Armada NY HQ to have a chat with the guys in the midst of all the ASOT happenings. Read below to hear all about the massive ASOT 900 celebrations, Esscalation Music Festival, joint ventures & brand new releases you won’t want to miss.

The Nocturnal Times: Welcome to Armada NYC everyone! Tell us about this special weekend and what each of you have going on here for the next couple days?

Ruben: To be honest it’s a very special weekend because it’s the first Statement! label night in the United States ever. It’s pretty much sold-out and it’s great to have a party like that with friends. Everything is going to be live streamed on Twitch as well so it’s not only a rooftop party during the day but people can join in as well. I think the BPM is locked into 138 so…super fast everything. Tonight is psytrance, tomorrow is going to be pretty much uplifting from the getco so it’s nice to bring another side of music into Esscalation as well.

The Nocturnal Times: ASOT 900 in the Bay Area along with the Armada Invites shows that have been in the U.S are all lifting up Armada’s presence here in the states. What would you all like to share about the label’s expansion and being part of it?

Ruben: It’s nice to see that the Armada nights are also kicking off in the U.S, and we’re especially happy for Statement! that it’s going to be in New York and Chicago is also coming up. There are a lot of cities that are very interested in the concept now as well, so on one side we have the Armada Invites kicking off, then Statement! as well. It’s nice to see that the U.S is embracing the club scene because it used to be only festivals I guess, and now we’re seeing how everything goes back to underground, to the clubs, and to people who really love the music instead of the ‘hype of EDM.’ It’s also nice to see cities you wouldn’t expect like smaller cities embracing the club scene as well.

The Nocturnal Times: To have ASOT 900 in California as the biggest Trance festival in the U.S is a really big deal. What are your thoughts on the location and size of this as its coming together?

Ruben: It’s at a baseball stadium, it’s insane. The first time I heard we were going to do it there, I went to google and I typed in the venue and was like “really??” How are we going to do a show there but okay! It’s going to be a very very cool show and we have another A State Of Trance in Ukraine first and that’ll be great. The week after is ASOT in the Bay Area and ticket sales are going through the roof with about 25,000 or so. I think this will be the biggest one by far because the biggest mainstage we’ve had so far must have been either Utrecht or Mexico where there was about 15,000. This is almost double and it is just one area, it’s going to be really good.

The Nocturnal Times: You both (Rodg & Ruben) have your Togetherr album that you’ll of course be showcasing this weekend, what exactly can fans expect to hear?

Rodg: You can expect some Togetherr Records! We’ll be playing some new stuff both from his album and my album. We’ll be playing some remixes that came from the Togetherr album, the album is already two years old. It’s the best of both worlds because a beyond the album we did is what the whole concept is based on. We went a little bit on our own route last year, and we’re going to combine with that so we are very excited. We did a lot of DJ sets that weren’t necessarily playing off the album, but we both were bringing in new music and it still fit (at least we think so!)

Ruben: I’m going to have my own album out on June 28th, so I’ll be playing some new stuff from that but only the stuff that fits in with Rodg as well. We only have one hour so it’s going to be like 40 tunes and it’ll be hard to pick certain tunes with that.

Rodg: Just the best of the best man!

The Nocturnal Times: You (Ruben & Elevven) have worked with each other for quite a while now. How did you all initially come together?

Elevven:  I’ve known Ruben now for 5 or 6 years, more actually. I met him in Tokyo at a show. I was there travelling and Ruben was playing an Armada night with David Gravell. I was there with Shingo Nakamura who is a progressive artist as well. He was showing me around Tokyo and was like oh Ruben de Ronde is playing tonight. I went to the show and met Ruben for the first time. Ever since then we’ve been in touch and released some solo stuff on Statement! then eventually we did a “Togetherr” remix. We did a remix for Ruben & Rodg and since then we’ve just been really good friends.

Ruben: We also have a track we made in LA last year “Lucky Penny.” (Elevven: it’s named after my dog who is Penny) The artwork is great for that haha. We were staying at an Airbnb for Dreamstate and there was a cat that came into the Airbnb that had a name tag ‘Lucky.’ Then together we became “Lucky Penny.”

Elevven: Since then I’ve seen three restaurants called Lucky Penny – crazy! But anyway that’s kind of it. We’re good friends now and we’re super excited to be playing shows with these guys. It’s a good friendship and that’s really where it stems from.

The Nocturnal Times: Elevven, you recently held your “Heartbeat Tonight” remix contest which blew up with hundreds of entries. How did you end up choosing the winner?

Elevven: That was insane. There were about 330 remixes and we individually went through all of them. I didn’t realize what a daunting task it really was until I started doing it. We narrowed it down to 10 or 15 solid ones, then from there we got it down to the top 4. The reason we really wanted to do that was because JES is such an amazing vocalist and the song has a beautiful topline. We had one version of the song but we felt like we could do more with it. We picked one in the deep kind of area, one in the future-bass area, one in the trance & progressive area, and one in the synthwave like 80s choice. I’m a big fan of The Midnight and that kind of stuff so it reminded me of that. We wanted to see different interpretations of the song, and Ruben is playing a mashup of it right now!

Ruben: Yeah I made a tune with Matt Fax called “Baguette” which is French for bread as well haha. I was streaming on Twitch when I was making this track and I don’t know how it came about but I found out it was the same chords as “Heartbeat Tonight.” I put the vocal on top of it and it was a perfect match! Some people were joking like oh you should submit it for the remix contest – you might win! Haha.

The Nocturnal Times: If you could all share one thing you’re most excited about as far as all of your futures together or something about Esscalation Festival, what would it be?

Elevven: Honestly I hope tomorrow is the beginning of a lot of events together. It’s really cool to have a great friendship with these guys and to be able to take that around the world eventually. We’ll start with the U.S. and share our music with people who love it, and that’s very awesome and special. Hopefully it’s the start of something bigger. We’re excited for the growing Statement! family including the collabs and events that come out of it.

Ruben: We’ve been working for many years to get this going and to have it in New York for the first time is especially exciting.

Featured photos from Esscala and A State Of Trance Facebook.