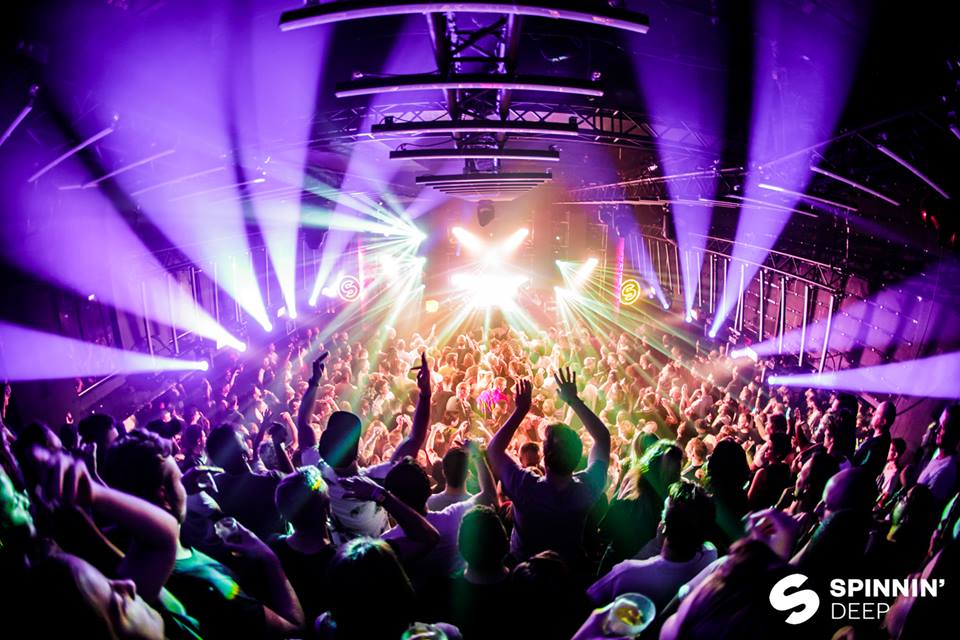 After sweeping the dance music industry with their upbeat and fest-ready tunes, Dutch duo The Him have further cemented their mark on the scene this week as they welcomed the annual Amsterdam Dance Event to their beloved city.

The pair’s relentless energy and fresh, experimental sounds always keep us wanting more. Whether waiting for the next infectious release or their next high-powered performance, it’s always an exciting and refreshing time with Jeroen and Steven. Now that we have come close to the year’s end, we can clearly state that 2018 has been one of the most prolific to date for The Him, with a consistent output of firey new tracks and ear-bursting anthems.

We’re reflecting on some of the most outstanding highlights following a hectic five days of buzzing excitement throughout Amsterdam, which brings us to Thursday’s Spinnin’ Deep party at AIR Amsterdam. With an outstanding lineup of some of Deep’s best players, an unforgettable night was created via a soundtrack provided by The Him, CID, Kryder, EDX, Moguai, Zonderling, and more. The evening’s ‘mystery guest’ spurred discussion and a roaring wave of elated smiles when Dutch legend Oliver Heldens showed up to play for AIR. A special session was in store for everyone in attendance, and The Him did a phenomenal job of pumping up the party right from the start.

The remainder of ADE for The Him included Spinnin’ Records first-ever gaming tournament, and performances alongside Justin Mylo, Lucas & Steve, Julian Jordan, Jay Hardway, Breathe Carolina, Throttle, Navarra, and so many more. Each show was as impressive and memorable as their electrifying music and the guys are themselves. Amassing millions of streams and topping the charts is only the beginning for these two. Their fanbase is growing and we certainly have our eyes on The Him with high expectations of more to come in the future.

We caught up with The Him in recent months to discuss their Summer of festivities and were stoked to get an update from them this October in their beautiful home of Amsterdam during the most celebratory week of the city’s year. Read below for our catch up with the guys:

Nocturnal Times: We are psyched to be here for this year’s edition of the Amsterdam Dance Event with you guys in your home base! How many years have you been partaking in ADE?

The Him: Yeah! We live in Amsterdam so we have actually always been here, like even before DJing I would go to the conference and parties. I used to go to school and this was in the school week right before the exams, and I would go like all week at ADE.

Nocturnal Times: Obviously it’s a special feeling having so many artists, teams, labels etc. around home this week. We’re here on the second day – what’s it been like so far? What do you have planned for the rest of today?

The Him: Well today we have the whole press day, and at the end of the day we go to the gaming event for Spinnin’. We are going to play some FIFA with other artists!

Nocturnal Times: And how many shows are you doing this week here in Amsterdam?

The Him: We have actually five shows lined up! We already played two, and tonight we have Spinnin’ Deep, and after that we go to Justin Mylo, and on Friday we have Lucas & Steve in the Q-Factory, and after that, we’re going to visit our friend Martin Garrix at the RAI.

Nocturnal Times: Especially during a week like this, there are so many shows one right after the other. Is there anything you do to prepare your sets for these specific crowds at each event, or how do you differentiate them?

The Him: Well it’s quite different because for example, I think we played way different at Sam (Feldt) than we will tonight at Spinnin’ Deep. You’ll try to give the crowd what they want, you know. If you go to Spinnin’ Deep you don’t play trap!

Nocturnal Times: And how do you make changes if/when the crowd isn’t reacting how you’d like them to?

The Him: We change, we try to look for different songs. We might go completely off plan and play a different set than expected, you know. DJing is also about playing to the crowd.

Nocturnal Times: How do you pick up on this from them in the moment? If the energy level isn’t up to par?

The Him: It’s a feeling, like a cook knows when a steak is done. You feel when the crowd is ready for a big song or some more relaxed stuff – we feel that.

Nocturnal Times: You spent the last month or so touring in Asia. Were there one or two standout crowds from your time there?

The Him: Yeah, definitely! Myanmar was crazy, Bangkok was crazy. We had a lot of fun in China too, but yeah it was all really good.

Nocturnal Times: Out of the whole Summer, what was one of your most favorite performances?

The Him: I think last weekend to be honest. Ultra! The Peruvians are so nice and they want to party so hard, it was really special. But also there are a few, like Lollapalooza in Chicago was also really special to us, Tomorrowland, Sziget. It’s really hard to say because every time it’s a different vibe, different people, a different set. But also some of them are local club shows where we get to meet fans that otherwise wouldn’t be able to see us. That is just so cool you know because not everybody can go to Tomorrowland, and we’re there in their city and they just come to party and say hi, and we appreciate that.

Nocturnal Times: Switching from touring to music, do you have any artists in particular that you’re really looking to collaborate with that you haven’t yet in the next year or so?

The Him: Some big pop artists! Yeah, we’ve got some stuff in the works so you’ll see what happens!

Nocturnal Times: Is this more so lined up for next year, or is there anything left for 2018?

The Him: We’re doing one more song this year probably if all goes well, and that’s going to be an all The Him song.

Nocturnal Times: Lastly, is there one city in particular that you’re looking forward to playing that you haven’t gotten to yet?

The Him: Tokyo! We have not been in Japan yet so we’re really stoked about that because we’ve got a lot of fans on Instagram from Japan. We had some people at Tomorrowland bringing Japanese flags with our logo on it, so that was really dope.