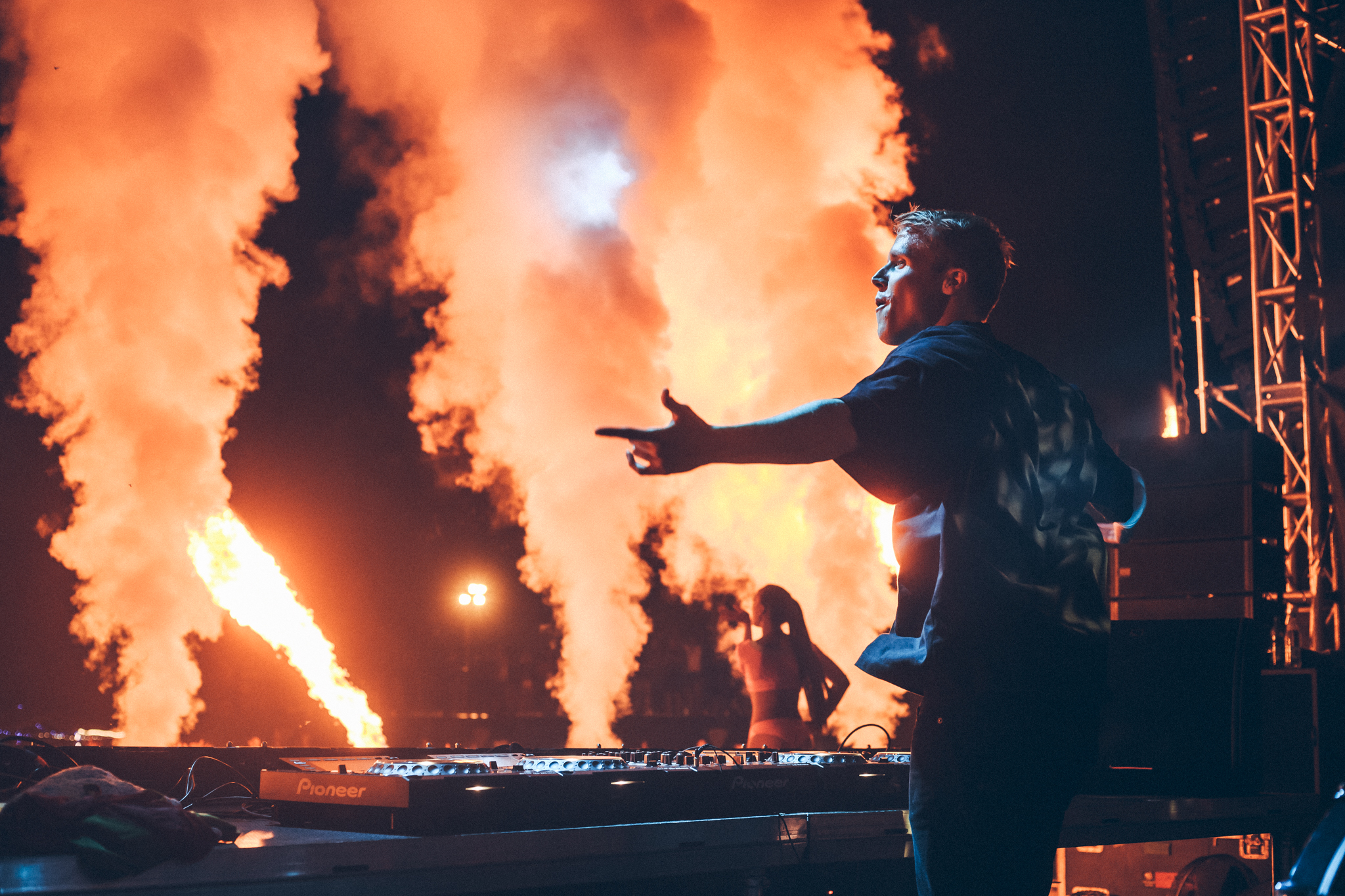 Thriving as a true jewel of electronic music, Dutch DJ/Producer Jay Hardway has wrapped up another grandiose week at the 2018 Amsterdam Dance Event. From performing at more than seven shows spanning just five days, to catching fellow friends and artists sets, to enjoying time in his home city, Jay concluded his festivities by scoring #64 spot on the DJ Mag Top 100 list.

ADE continues to serve as somewhat of a milestone marker within every year, as thousands of artists in the industry come together for both business and pleasure. One of the biggest celebrations of dance music throughout the whole year, Jay took full advantage of his time in Amsterdam this year and demonstrated yet again why his international fanbase is forever growing. After releasing a wildly impressive repertoire of new music this year, Jay is still in the midst of topping off 2018 with tons of tour stops around the world. From clubs in Boston to France, to shows in London, Bali, Germany and dozens more, to mecca festivals like Tomorrowland and Sziget, 2018 has been an absolute whirlwind of live performances for the Dutch maestro.

Besides his slew of sets for ADE, fans caught an extra special dose of Jay’s creative talent during his masterclass session, giving guests a glimpse into his innovative production style and “behind the scenes” look at making music. Taking this genius to the stage, Jay swept over parties like the Maxximize Label Night at Club NYX, where he performed after DJ/ Production duo Blasterjaxx. As tiny as it was, NYX transformed itself into an absolute rave haven where hundreds of fans streamed in all night to catch favorite artists like Jay. Alongside artists like Mike Williams, Lucas & Steve, Bassjackers, Mesto and more, Jay threw down a hugely energetic set at Club AIR for Spinnin’ Sessions. The rest of the week gained enormous  momentum as Jay appeared for sets at Mesto Presents: Messin’ Around, Skyline Sessions by Lucas & Steve, Young Gunz x Julian Jordan & Friends, and more surprise parties in between all that jazz.

Always keeping in mind to do something special for his fans, Jay and his team took time to post short and sweet recap clips on Instagram of ADE, day by day. From day 1 to day 5, we were all delighted to see the silly antics Jay and his friends were up to throughout the week, and there’s nothing like reliving his tremendously energetic sets even just for a few short seconds on these mini movies.

We sat down with Jay to chat about all things ADE, first-ever concerts, pineapples, pizza and more – check it out in our interview below!

The Nocturnal Times: We’re here at the Amsterdam Dance Event 2018 and there is so much going on. Events, parties, the music festival and more. How does it feel to be back for another year? What’s changed?

Jay Hardway: It’s good! I live here so it’s good to have a home game, and I get to sleep in my own bed. What’s changed from last year is that last year I had the “fear of missing out,” and I was like oh I need to be there and there. This year I’m like, you know what, I’m going to do my thing and my parties and then I’ll see wherever I end up. I’m more laidback and chill this year. Also music wise I’m focusing more on what I make, and it’s working. I’m more relaxed.

The Nocturnal Times: Would you say this week in particular holds a special place in your heart because it is home for you?

Jay Hardway: Yeah I mean it’s fun to see people you meet from all over the world, you see them in Boston once and then here and Amsterdam. It’s cool to have them in your own country because you’re always proud of your own country. You want people to enjoy it and enjoy the food, enjoy the Stroopwaffles haha! It’s such a small community and the cool thing is that you can say “Oh hey Martin Garrix, I like your music.” And they can say “cool let’s meet up.” We’re an hour away, so it’s really nice.

The Nocturnal Times: Out of the four shows you already had yesterday, did anything unexpected happen?

Jay Hardway: It was quite good, everything went according to plan! The sets are always short, there’s 45 minute sets for the majority of ADE so sometimes you get caught by surprise like “oh I only have two minutes left.” It goes by really fast but what was cool is that the Blasterjaxx party was in a really small club, I think you guys saw it. The energy was crazy, I played after Blasterjaxx and there was so much energy in a tiny room so it was amazing.

The Nocturnal Times: Would you say that there are any venues around the world that, even though they may be tiny or somewhat random, you still love playing them time and time again?

Jay Hardway: I mean not really like this but this is a different vibe because it’s ADE. Club NYX where we were yesterday is normally a gay club and they play different kinds of music. So It’s cool to see those small clubs transform into rave clubs, like rave dungeons…! There are some clubs like that around the world. I played at Opium in France a month ago, that’s also a club where they appreciate good house music. So you play some older tracks and it’s really fun.

The Nocturnal Times: Do you have one or two clubs across the world that are your favorite?

Jay Hardway: Well, Opium is good one. I like Echostage in D.C but I only played there once a couple years ago, so I don’t know what it’s like now since I haven’t been in years. Vegas is always cool…if you can DJ there and even though it’s not always the crowd you want because it’s pretty commercial, it’s just a whole vibe. It’s like going into a different world. There’s no rules, everyone goes crazy at pool parties and everybody is like “okay we’re in Vegas now, fuck it!” I like that vibe.

The Nocturnal Times: Who was the first DJ or live performance you ever went to?

Jay Hardway: Well I know my dad used to play, and he still plays bass tuba, so we went to his concerts. I thought it was super boring and I had to go to church when I grew up so I had church music too. I remember when I was 15 I started going to festivals, and Laidback Luke was one of the big DJs then. I think Laidback Luke was my first remembrance of “oh that’s what I want to do.”

The Nocturnal Times: Other than hosting your own radio show, are there any radio shows or podcasts you enjoy listening to in your free time?

Jay Hardway: In general I listen to anything except what I play. It’s such a weird taste in music, it’s everything you can imagine but not too much electronic music. There’s pop, weird Dutch artists, classical, alternative stuff. There’s different things.

The Nocturnal Times: We know you like pineapples, but how do you feel about pineapple on pizza??

Jay Hardway: Well, it’s not allowed. It’s a crime! (Joking: someone last week was sentenced to five years haha). I like pineapple but on pizza it’s just not right.

The Nocturnal Times: What is your favorite kind of pizza…??

Jay Hardway: Pizza from Napoli, It’s amazing. If you’ve ever been to Italy they have such good food there. Go there, it’s beautiful and it’s good food.

The Nocturnal Times: Do you have one most embarrassing stage moment?

Jay Hardway: I’m not easily embarrassed. Sometimes I stop the music by accident and you’re like “shit.” But then you’re like “okay who’s ready!!” And you go on. I don’t think I’ve ever really been embarrassed on stage. I mean what would be a situation where you would be? (The Nocturnal Times: If you ever fell..??) I never fell, the only thing I could think of being really embarrassed by is if you ripped your pants. But that never happened and hopefully it won’t!

The Nocturnal Times: Tell us about what you’re excited for in 2019?