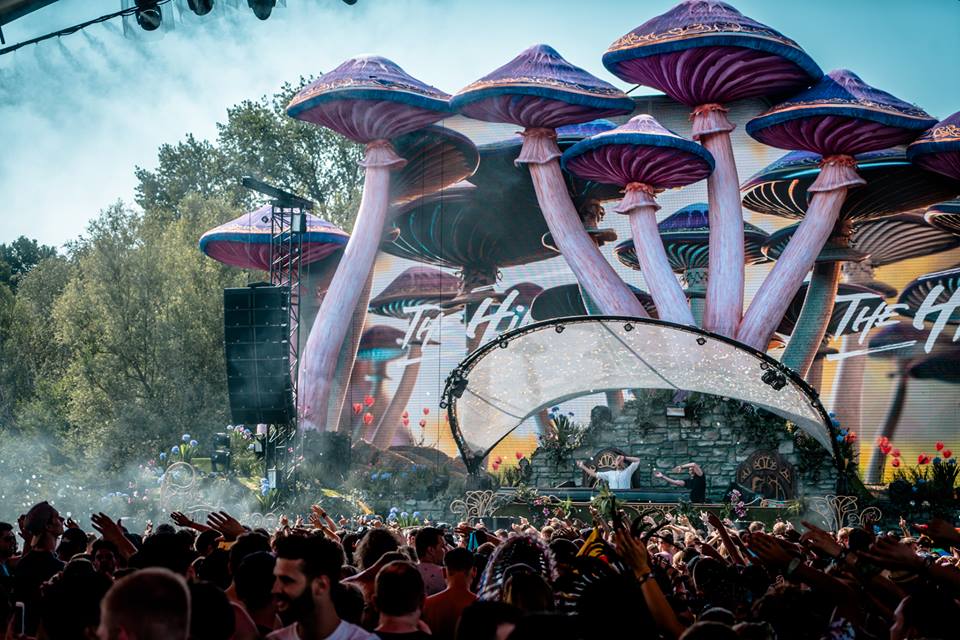 Since embarking on their journey into the world of electronic music, DJ/Production duo The Him have prospered into golden treasure artists. Jeroen Kerstens and Steven Berghuijs are the Dutch maestros behind The Him, and today marks another special release for the duo as they release their new single “Nothing On Us” via Spinnin’ Records.

Still riding major waves of success this year, The Him has projected magnetic energy across the world and in doing so, has cultivated a global fan base that has quickly become attached to their heart soaring music. The alluring pull these two have on stage is simply irresistible, and crowds got their fill this past summer when they rocked out major festivals like Lollapalooza in Chicago, the mecca of Tomorrowland, and Sziget (just to name a few). Additionally, U.S cities from Kansas City, to Las Vegas, to Columbus were lucky enough to experience a summer set by The Him. Returning back to their home in Amsterdam for Mysteryland, as well as shows in Slovakia, Romania, Poland, Norway, and more, to say these guys were on a nonstop roll this summer would be the understatement of the year.

Mixing sets of pure positive energy, booming sound, and blissful vibes, every crowd that experiences a night with The Him is hooked on their spellbinding high. After their track “Feels Like Home” garnered massive support by leading dance publications like Dancing Astronaut, Your EDM, DJ Mag NL, Mr Suicide Sheep, Chill Nation and more, The Him’s global music takeover was inevitable.

While the pair continues to evolve their own sound by experimenting, collaborating, and venturing out with a variety of styles, they manage to maintain their core atmospheric touch that has made each and every one of their releases a soul-striking work of art. 2018 boasted an enormous arsenal of new music for The Him, including their sexy single “White Lies,” team ups with Parson James for “Broken Love,” Jay Hardway for “Jigsaw,” and their original anthem “By Your Side.”

With summer coming to a close and the fall season upon us, The Him have arrived with a fresh single “Nothing On Us” – a surefire record to become a new staple throughout festival circuits. Featuring plush female vocals, the song is intricately laced with charm and serendipity. The Him’s playful progressions build up with strong stamina and flow seamlessly into a flirtatious drop that circles around with boundless energy. By now, fans have an unmistakable grasp on The Him’s persona and musical vibe, and “Nothing On Us” is simply begging to be blasted through speakers under showers of confetti and beaming lights.

The Him had even more exciting things to say about all things touring this summer, new music, favorite festivals, and more in our interview below. Stay tuned for upcoming announcements and performances by The Him!

The Nocturnal Times: We last spoke with you guys in the beginning of Summer, when you had released “Broken Love.” Since then, you’ve had a whirlwind of travelling and performances. How does it feel to be wrapping up another summer season and heading into the latter half of 2018?

The Him: Too bad that this summer has ended already! We had so much fun meeting new fans all around the world. But as the summer ends we have some new cool stuff coming up! We just kicked off our world tour and a new track “Nothing On Us!”

The Nocturnal Times: Year after year, Ibiza remains a top summer destination and highlight for DJs. Tell us about the Ibiza experience and how it was supporting two of the industry’s leading artists Kygo and Martin Garrix?

The Him: We can’t explain the vibe Ibiza has. It gives you a magical experience of party hard, a beautiful island with amazing weather and incredible food (also important;)).That Martin Garrix & Kygo asked us for a second year in row was really special to us. Both shows were awesome!

The Nocturnal Times: With slots at such major festivals like Tomorrowland, Sziget and Lollapalooza, how do you go about keeping your sets fresh for each new crowd?

The Him: We make a lot of remixes, bootlegs, edits and spend a lot of time on doing this because we try to be unique when we play live. We want to give the fans a different experience than the DJ before us or after us! Every show is unique and we do adapt our sets to that and learn from it every time.

The Nocturnal Times: Considered the mecca of all music festivals, Tomorrowland is truly an out of this world experience. What can you share with fans who have yet to go, about why this stands apart from other festivals around the world?

The Him: Have you been ever to Disneyland? It has the same feeling and looks but every ride is a stage haha. If you have a chance to go you should without a doubt. People from all over the world come there for one thing: electronic music. It’s special.

The Nocturnal Times: Your new single “Nothing On Us” boasts an all around easy going vibe, featuring a strong female lead. Tell us about how you guys began the production of this single?

The Him: It started in a writing session in Los Angeles this year. We usually play around with some different chords and then write the song on it. On that day we made the idea for the drop too, it was way more synthy in the beginning and had a big piano in it too but. Then when we were back in Amsterdam we tried a stripped down version and it all fell into place!

The Nocturnal Times: Have you been weaving in “Nothing On Us” during any recent sets to give fans a glimpse of the track? If so, how have crowd reactions been?

The Him: We played it for the first time at Lollapalooza in Chicago. The crowd was wild and the setting is beautiful with the Chicago skyline in the background. The audience responded so well on the track and we got a lot of messages through instagram after the show if we could tell from who the track was.

The Nocturnal Times: After a jam packed summer of live performances at festivals and club shows, what were one or two stand out countries or crowds?

The Him: Lollapalooza because after the first song they started moshing and their energy stayed on top till the end of the set.

The Nocturnal Times: You’re spending the next few weeks touring around Asia, including sets at Output Festival and Life in Color. How does it feel to return to Asia and play such renowned stages?

The Him: It is really special that our touring is extending to Asia. We love the people there and it will be a whole new experience for us to see how the crowd responds to our set.

The Nocturnal Times: What can fans expect from The Him for the rest of this year?

The Him: A lot of touring and new music. Can’t wait to show you guys everything!