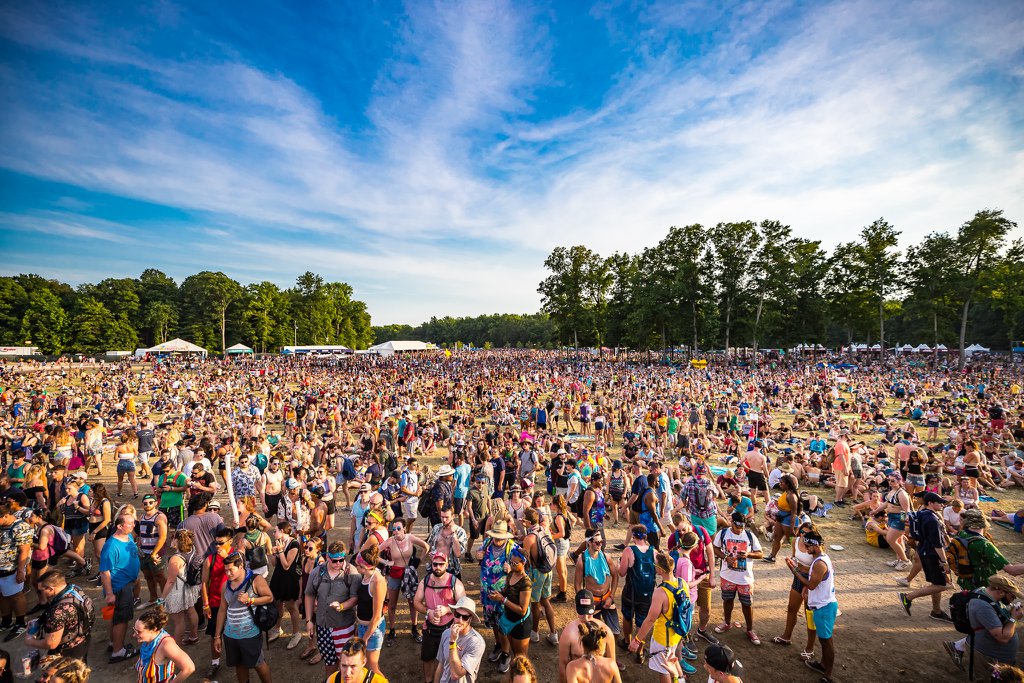 So, who’s ready for Firefly next year?! After this years’ super successful Firefly Music Festival we’re still raving about this past weekend. Set on the grounds of the huge Dover International Speedway, Firefly accomplished a 7th year of the multi-genre, 4-day music festival. Starting acts began late Wednesday evening for the arriving campers and went on until midnight on Sunday, June 17, 2018. 100s of artists, almost 100,00 fans, tons of food trucks, lights, and a weekend full of sun and perfect summer weather hosted the perfect woodland grounds.

For us, Friday was day 1. We arrived to our campgrounds where hundreds of festival attendees had set up camp and were getting ready for a weekend of festival festivities. A quick 15-minute stroll from the campgrounds landed us at the festival entrance where the iconic Firefly Music Festival sign can be seen indicating the start of The Woodlands. Music can be heard coming from every direction as the festival was in full swing. Our favorite acts of Friday were Foster the People, Big Gigantic, Jimmy Eat World, and Cheat Codes. With eight stages spread across the massive grounds, there was always a stage to be jamming at. Throughout the day festival goers can hear a range of genres from rapper Logic, to the talented electronic sounds and cymbals of producer and DJ, Kasbo.

While the headliners rocked out at the main stage, Firefly; the rest of the acts had killer sets at their own stages. A favorite of ours was the tented Pavillion where Ookay and Cheat Codes had the crowd jumping with joy. Cheat Codes released some new sounds to the lucky attendees during their hour set; as well as the Arctic Monkeys playing songs from their brand-new album released to the public the following day. After hours of dancing everyone’s bound to get hungry. Have no fear, Firefly was also a food festival! With hundreds of food options spread throughout the festival grounds, no one was going hungry. With names like Wok on the Wild Side, Mom’s Spaghetti, Big Mozz, Humpy’s Dumplings, and It Ain’t Easy Being Cheesy, how can you not want to try and eat everything. Not to mention, a Dogfish Head Brewery tent next to the main stage filling the hands of all beer lovers.

Day 2 came before we knew it. The sun was shining, the speakers were bumping, and the lyrics were flowing. Saturday had a hell of a lineup in store for us. The Killers, Eminem, Lil Wayne, San Holo and many others made Saturday, at least our, favorite day. The Killers took the main stage for a killer twilight set that was probably the most fun we had all weekend. When it came time for the Rap God to take the stage, the crowd was energized and ready. The real Slim Shady stood up and took the stage by storm. Banging out hit after hit from his older albums the crowd loved every second of the hour and fifteen-minute performance. We’ve never felt so united rapping every word of almost every song. Finishing off his set with memorable fireworks and pyrotechnics, the crowds’ energy was at an all-time high.

Back at the Pavilion, San Holo dropped hit after hit as the light show mesmerized the happy dancers. Strolling through the grounds, we came across a disco ball reflected magical forest with dancing lights across trees and a beautiful path to more music. As well as, The Nook where fans can escape to and curl up in their hammocks with a book, or hop over to The Thicket where a silent disco had everyone dancing to their own beats in special headphones. The Treehouse stage was also in a little hidden wooded section where artists took the stage to a more personal and smaller crowd. Late Saturday night to close out the festival, Portugal, the Man took the Treehouse stage for a DJ set that was beyond fun to experience.

And just like that, we woke up one more time to the beating sun and one more full day of Firefly. Sunday hosted acts such as MGMT, Kendrick Lamar, SZA, and Odesza, to just name some favorites. Upon entering the festival grounds, we stumbled upon new and upcoming artist, Betty Who. With very fit and handsome dancers dressed in white muscle tanks reading “Who the F**** is Betty Who?” we couldn’t keep our eyes of the shining Australian superstar. Performing songs from her new LP, this was a surprise artist added to our list of favorites of the weekend. The Lawn stage was headlined by Alt-J who had a unique stage setup that was impossible to look away from.

Meanwhile at the Backyard stage, SZA stole the crowd. With talk of her not being able to perform due to vocal cord injuries that put her tour on hold we were ecstatic to see the talented singer take the stage as scheduled. Dressed comfy and ready to put on a show, we were ready for her too. After her set, the man himself, Kendrick took to the mainstage for a high energy and social set. Talking to the crowd between songs, allowing them to take the lead and rap his biggest hits, everyone was having a great time; even the young children sitting atop their parents’ shoulders. After a firework display to raise the energy even more, Kendrick ended the pre-last set of the night. As the crowd made their way over to the Backyard stage for one more final set, Odesza took the stage for a humongous performance. With the Odesza drum line, dancing and drumming throughout the set, the crowd could not stop moving. Bringing out Naomi Wild, for a live vocal of “Higher Ground” we had our hands high in the air and our bodies filled with joy. Every drop of the electronic music band’s set erupted hundreds of glow-sticks as fans threw them up into the air. And just like that with the final drop, the final firework, Firefly had come to an end.

Music festivals are all unique in their own ways, and Firefly was definitely its own beast of Delaware. Bringing almost 100,000 people for seven years now, the multi-genre festival does a great job of controlling the crowds, bringing the acts, entertaining and feeding the thousands of people; and not to mention allowing thousands of people to set up camp for the duration of the fest. We loved every part of it and hope to do it all over again next year! Will you be there?