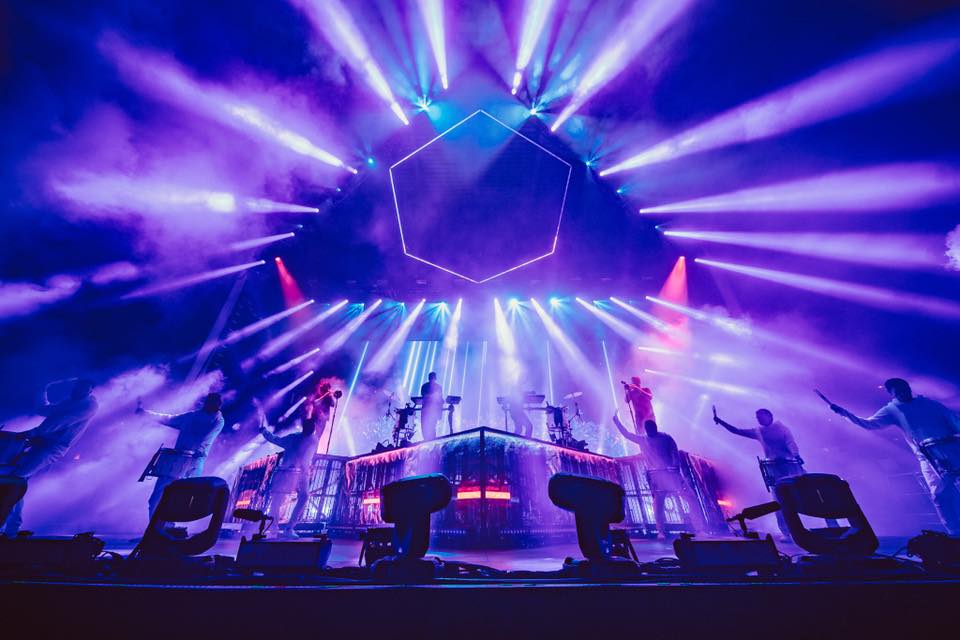 Grammy-nominated duo ODESZA has been breaking ground with their ‘A Moment Apart Tour,’ which has successfully come to a close. The final leg of their U.S. shows found the guys in the Sunshine State, playing for crowds in Jacksonville, Orlando, and Miami.

The ‘A Moment Apart Tour’ commenced last September in New Zealand, making stops across nine countries in the months to come and selling out various cities across the world. Their unique live show features a six-piece drum line, guitar, horns, and vocalists, bringing to life a show that is truly of epic proportions. The tour continued in the start of 2018 across North America, and we caught last week’s spectacular show in Orlando, Florida at the CFE Arena.

At the home of the University of Central Florida, Harrison Mills and Clayton Knight invaded Knight territory on Thursday, May 17. Towards the tail end of the magnificent and floor-shaking U.S. series of ‘A Moment Apart,’ this performance was overflowing with energy and good vibes.

Kasbo and TroyBoi set the tone for the wild evening of energy and thrills. TroyBoi captivated the audience’s ears, opening with KSHMR and Will Sparks’ “Voices,” calling out everyone’s inner tribal spirit. As he proceeded to trap out on stage with his sweet dance moves, jams like “Afterhours” (his mega-hit alongside Diplo) and Valentino Khan’s “Deep Down Low” shook things up, while REZZ’s “Diluted Brains” bled through the airwaves. All sorts of chill and amped up moods spread throughout the Arena – even the peaceful feelings of Damian Marley’s “Welcome To Jamrock.” An unexpected open for ODESZA, TroyBoi surely didn’t disappoint on this one and delivered a smashing intro.

Following much anticipation and a solid break for setting up stage, ODESZA finally appeared and from the moment they took the stage, it was just WOW. Lights from all colors of the spectrum began swirling overhead, gleaming out from the massively impressive ‘A Moment Apart’ stage setup. Seats entirely filled up, even up to the upper level, bringing everyone together for one gigantic party. Mills and Knight pulled out all the stops, bringing along the ODESZA drumline for a profoundly powerful night. It felt like one giant jam sesh, with the drumline, keys, trumpet, trombone, and of course the screaming crowd. Announcing that this was their first time returning to Orlando in four long years, the guys showed their happiness and gratitude towards their fans and all who took part that evening.

As space-themed visuals circled behind on a large screen, ruby red and fluorescent white lights lit up the venue, and the black hooded members of the drumline came in and out to add to the experience. When we say this drumline was next level, we honestly mean it was seriously incredible  – the most outstanding aspect of the live show. Their synchronicity was mind-blowing, and the power booming from behind those neon drums was magic.

All the good vibes were shared as the guys played favorites like “Sun Models,” “All We Need,” “Line of Sight,” and “A Moment Apart.” They even brought out Naomi Wild to sing “Higher Ground” upon a fiery blaze and had friends swaying side by side to “Across The Room” later on. Every ounce of good vibes was locked into that arena from left to right, front to back.

Number one of reasons why ODESZA wins is their astonishing state of the art live performance. Each working part came together so well to create a truly blissful overall experience – one which generated that overwhelming sense of togetherness. The power emanating from the stage was beyond belief, and it was so nice to look around and see fans swaying to their melodious tunes from start to finish. ODESZA brought the night to a celebratory close after meeting the crowd’s overwhelming demand for “one more song” in a sea of lights, and then yet another pulling the entire 90 minute set to a halt, with the drumline making one more appearance for a last hoorah. Next time ODESZA hits a city near you, be sure to get in on all the groovy feels, and don’t miss out on these special memories to last a lifetime.