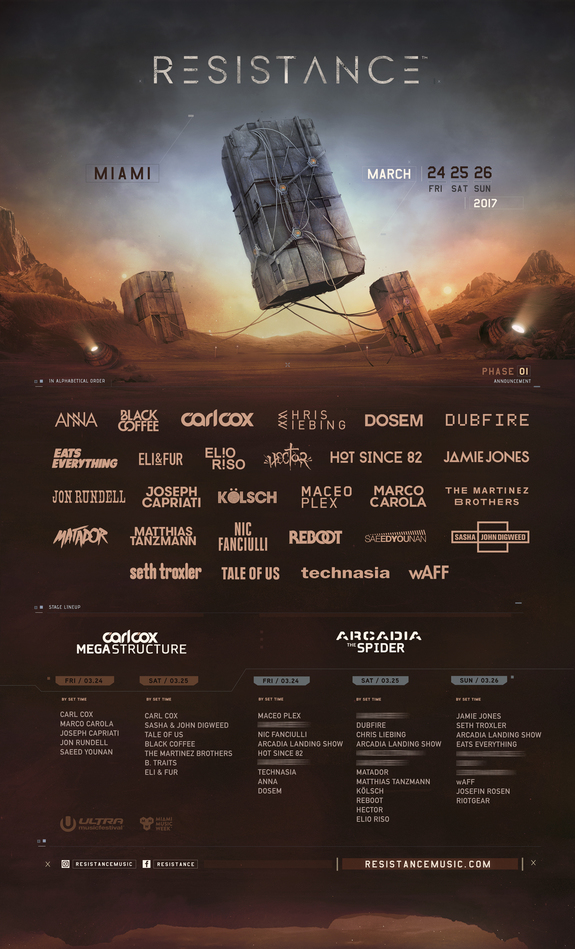 Ultra Music Festival plans to grow even bigger in 2017 as the renowned worldwide brand announced an expansion of their signature Resistance series.

First making its debut at Ultra 2015 in Miami, Resistance is home to the deeper and darker beats. Shy away from the Main Stage for an underground atmosphere right in the middle of world’s most notable dance music festival. During UMF 2016, Resistance delivered its first-ever Arcadia Spider concept, which then traveled to various installments of the festival throughout the course of the year.


What else is in store for Resistance 2017? For the first time ever, Resistance will take over two stages at Ultra—and techno icon and electronic veteran, Carl Cox, will serve as the brand ambassador. Arcadia’s fire-breathing Spider returns with house music and techno heavyweights, including Chris Liebing, Eats Everything, Hot Since 82, Kölsch, Maceo Plex, The Martinez Brothers, Nic Fanciulli, Seth Troxler, Technasia, and more. The Resistance debut at the Megastructure brings Carl Cox & Friends on both Friday and Saturday along with Black Coffee, Joseph Capriati, Tale Of Us, Eli & Fur, and more.

In addition to Resistance, Ultra will also host curated stages such as their returning Live Stage, Ultra Worldwide, UMF Radio, Oasis, and A State of Trance.

Check this space for the Ultra Music Festival 2017 phase two lineup, which will be announced soon. Relive Ultra 2016 with the official 4K Aftermovie by FinalKid: