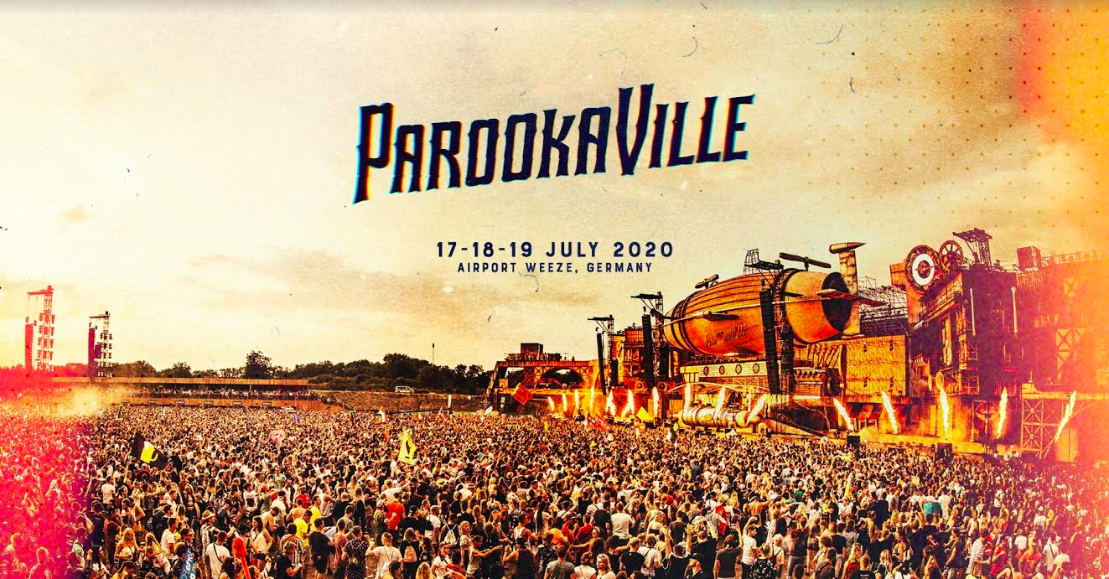 PAROOKAVILLE once again brings the world’s best DJs to Weeze, Germany. Names like Dimitri Vegas & Like Mike, Armin van Buuren, Steve Aoki, Afrojack, Oliver Heldens, and Salvatore Ganacci are announced for the 2020 edition. But these are only a small few of over 300 artists that PAROOKAVILLE will present from July 17th to 19th, 2020.

Bernd Dicks, co-founder of PAROOKAVILLE elaborates, “Following our first big anniversary last year, our citizens gave us the best compliment possible by again buying up to over 80% of the available tickets within hours at the start of the ticket sales, without any artists even announced yet! Now our announcements are beginning: Global stars, newcomer artists and cross-genre surprises await the citizens and fans of the most insane festival city in the world!”

Mainstage veteran and PAROOKAVILLE citizen favorite is also returning to the “City of Dreams”: Armin van Buuren! His newly released double-album Balance impressively encompasses the Dutchman’s musical bandwidth. His four appearances at the festival already earned him a place of honor in the PAROOKAVILLE Hall of Fame.

Oliver Heldens, one of the most in-demand DJs in the world, returns to the PAROOKAVILLE Mainstage this year. In the wake of his debut mega-hit “Gecko”, Heldens followed up with “One Kiss” featuring Dua Lipa. Now he is back with his current smash “Turn Me On”. Consistently delivering one super hit after the other, Oliver has also taken the No. 7 spot in the current DJ Mag Top 100 with his rapturous live performances.

Sweden’s Salvatore Ganacci brings fat beats back to PAROOKAVILLE with his insane top entertainment performances. He is also known to grab fans up on stage to party with him! Maybe you are the lucky one?

Dutch Superstar Afrojack returns for the fourth time to headline the Mainstage at PAROOKAVILLE. Following pop collaborations with luminaries including David Guetta, he has recently delivered driving Future-Bass sounds again. Last year he enchanted the masses at PAROOKAVILLE with his high-energy set.

Belgium’s Amelie Lens is a special newcomer to the arsenal of headliners. 29-year-old Amelie’s stellar rise began in 2016 with her minimalistic atmospheric Techno sounds. Today she is a fixture on the international scene, and 2020 will finally see her debut performance at PAROOKAVILLE.

Australian DJ Fisher also enjoyed a skyrocketing start in 2018 with his track “Losing It”. This track quickly became one of the most-played festival tracks around the world. His set in Desert Valley last year was one of the highlights at PAROOKAVILLE. This year he returns there as a headliner with a penetrating Tech-House sound!

Top quality newcomers also on the other stages

There’s also great news for House fans. The Italian trio Meduza first gained attention in 2019 with their hits “Lose Control” and “Piece Of Your Heart”. Those tracks went on in record time to bring home 28 Platinum awards and over one billion streams. Now they’re going to PAROOKAVILLE to perform at Bill’s Factory presented by 1LIVE, just like Vize and YOUNOTUS.

Headhunterz, one of the most influential Hardstyle acts, returns to PAROOKAVILLE for the fifth time. When the City Of Dreams will present its hardest genre it will be under the open sky.

Cosmic Gate also return to the “City of Dreams”. Their distinctive Trance sound following on the heels of their celebrated premiere last year. 24-year-old Canadian Juno Award winner REZZ has had a skyrocketing career since signing to deadmau5’s label. She is making her debut at PAROOKAVILLE as well. Another PAROOKAVILLE premiere is coming up for DJ and producer Markus Schulz, a worldwide guarantee for the finest trancy sounds since the Nineties.

The Bass-and-Trap community can also look forward to new artists. The Chicago-based sister team Krewella has been underway for years mixing R’n’B, Bollywood and pop sounds with Trap beats to create irresistibly driving tracks. And following his PAROOKAVILLE debut in 2018 the Hardtrap pioneer SAYMYNAME is also set to return this year.