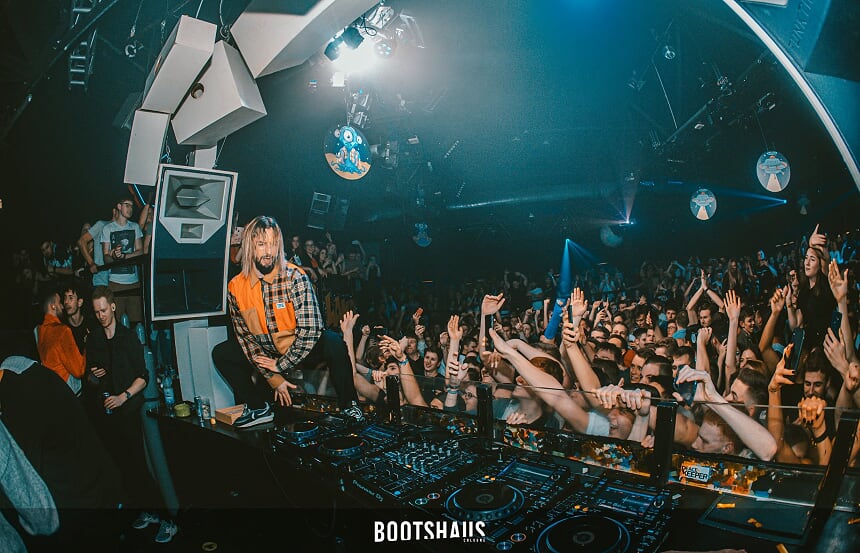 Saturday January 18th was the day that Salvatore Ganacci would set Germany’s famed Bootshaus on fire. Originally the event was scheduled for December but due to Salvatore falling ill the date was re-scheduled and nonetheless, it was an incredible night.

Bootshaus had arranged that the event in December was free for everyone and the people that had already bought their tickets and were already on their way to the club that night, excited to see Salvatore play, had free admission to the event still in January. People who came out the first night still had a chance to see the second headliner of that evening, veteran producer and DJ the legend Garmiani play with the regular residents Dave Replay and Oliver Magenta.

For this night the residents got to play with Toby Green as substitute for Garmiani who was missing this time around. Garmiani, already a veteran on the turntables and having seen most clubs and festivals in the world, is regularly remixing the legends. From working with Steve Aoki to Pharrell Williams, his high paced energetic hip-hop / dancehall infused sets make any crowd move. And so they did as Garmiani unwillingly became the headliner of the 6th.

People that might have been disappointed that they would not see Salvatore this night were in for a wild ride. Garmiani filled the space that Salvatore left as well as he could. He clearly succeeded in turning that night into something special for the crowd that come out to see him play. His heavy hip-hop infused high paced set filled the musical void that Salvatore left, but something that even he couldn’t fill were the crazy antics Salvatore is known for. Nevertheless Garmiani made this night his night. He came, saw and conquered like a pro.

Knowing that Garmiani is a seasoned veteran, we were curious to see how the youngster Toby Green would entertain the crowd. They are two very different DJ’s. Where Garmiani is more hip-hop / dancehall orientated, Toby Green is a great electro / bass house DJ. Toby already has some masterful releases under his belt at almost every mayor label, (Dim Mak, Hexagon, and Musical Freedom to name a few).

Toby came right after Bootshaus veteran Dave Replay. As usual Dave delivered like a professional. His sets are always a treat to the ears. Toby Green came and took flawlessly over, delivering the music the crowd was eager to hear. Overall Toby Green played a solid set, quite different to Garmiani’s. Toby entertained the crowd with some great sing-a-long tracks for everyone to shout along to and alternated between some heavy electro stomping music.

“Salvatore Ganacci” is a nickname which his friends gave him, because his “style of playing football is very Italian” and the name sounds Italian.

Honestly, most people probably hadn’t heard of Salvatore Ganacci until his crazy antics at the Tomorrowland Mainstage in 2018. Salvatore has been releasing music since 2014 and really made the best out of his Tomorrowland 2018 show. Granted if you watch earlier shows of him he always has been this crazy entertainer. It shows that this day and age we live in is a very fast one. Once you go viral your life can become suddenly very different.

Salvatore is also no stranger to releasing on the biggest labels in the world. This certainly gives him the knowledge of how to mix some great music. Whether he is a great genius or just a crazy madman was the question of the night.

His set and antics

His entrance was one of epic proportions. The whole club went wild and started chanting his name on the beat of “seven nations army.” Imagine entering a club and everyone chanting your name. One can only imagine how that would feel.

As soon as he started playing his tracks the club went wild. This show was of totally different proportions. Some DJ’s rely on great visuals or bring their own MC or just play an epic set. Salvatore brings his musical skills with his crazy personality.

As a guest you cannot be sure if the night is about the music or about just waiting to see what crazy stuff he is up to again. We reckon everyone has their own reason to see Salvatore, whether it is seeing him climbing the stage or his interaction with the crowd. At one point he put a track on loop and walked outside. Followed by some heavy security he walked into a corner of the outside area, followed by the masses with their phones all out and eager to film and take pictures. In addition when Salvatore was standing in the corner he took a picture as well from the crowd. At another point during his gig he decided to join in on the sit-in in front of the DJ-booth.

There were so many fun-loving moments that night that it is hard to describe them all. We advise you to see Salvatore at least once in your lifetime and see for yourself what kind of antics he serves you then. Whether taking a nap or doing push-ups – with this guy nothing is certain.

One can only conclude that even between all his crazy crowd interactions that his music selection was on point, fitting with all the antics he was up to. The most surreal moment was probably when his set came to an end. Blasting Wham’s classical hit “Careless Whisper” (thank you Ryan Reynolds a.k.a Deadpool) for the full length while taking pictures with some fans. To be honest if you are able to conclude your set with the full version of Wham’s classical hit “Careless Whisper” and the crowd is still chanting your name we can safely assume that you got it made as a DJ and that it was a great night.