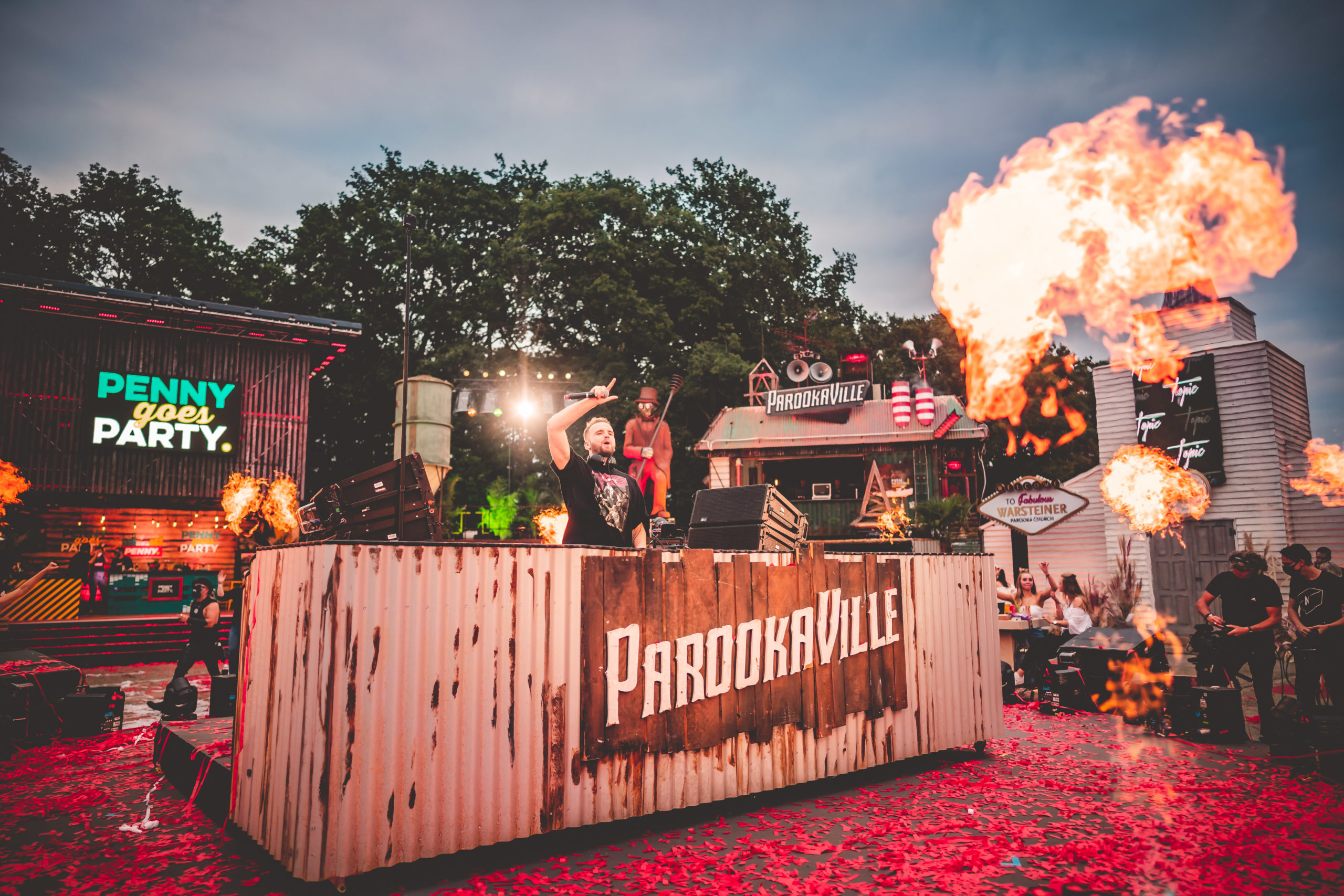 This year the team behind Germany’s biggest electronic music festival PAROOKAVILLE decided last minute they wanted to give back to their fans. A last minute PAROOKAVILLE was arranged from July 17-18, and it was a weekend that would become unforgettable to a selected few special people.

The question is, how can one put the magic of a two day festival on livestream. The recreation of an authentic experience was something the team envisioned. Firstly because, anyone who ever has been to PAROOKAVILLE knows it is not only about the DJs performing there, but also about the whole vibe oozing through the city. Secondly you can’t just put up a green screen and let the DJs play in front of it.

What the team did was amazing. They dug through their warehouses and built us instead a small suburb. Most of the iconic PAROOKAVILLE buildings did find its way towards this incredible set up. Most notable the postoffice, the lottery, the recognizable Statue of Bill Parooka “the founder of PAROOKAVILLE” and most importantly the Warsteiner Church.

As most dedicated PAROOKAVILLE citizens know, many of the buildings are sponsored by a brand. And one of the best ones is sponsored by the German brewery Warsteiner. Every year at PAROOKAVILLE people are able to get married at this beloved location. Although most of these marriages are purely for entertainment value, each day one couple has the option to get married for real. For this special moment, PAROOKAVILLE even takes care of a best men and an official registrar. And Warsteiner of course is taking care of enough beer to celebrate this joyous occasion.

This year the best man was none other then German rising star Topic. He is the best man to Sabrina and Marvin; a German couple that won an opportunity to get wed at the Warsteiner PAROOKAVILLE wedding. So many people apply for this magic moment to have their wedding at an actual festival. In a short conversation with the newly wed couple after the ceremony, we got some answers.

For this story we have to go back to last year’s PAROOKAVILLE. Marvin got in contact with a member of the staff. This member smuggled the ring Marvin carefully selected for his bride to be inside the holy grounds of the Festival. Under false pretense Sabrina had to come to the Warsteiner church. It was once she arrived that Marvin went on his knee and proposed. Such a beautiful love story. It seems only fitting that they married for real, at the same location a that became so special in their life, a year later.

Overall the wedding was fun to watch. The couple arrived in an old Mercedes, the bride looking stunning and the groom looking like a million bucks in his suit. Vows were spoken and no objection was made. The sun was shining down upon the happy couple. There where friends invited, cake was cut, and Warsteiner provided enough free beer to the whole group.

But PAROOKAVILLE is more then just a wedding, PAROOKAVILLE is its own free state. And in this free state one thing is more important than anything else, music! With some time in between the wedding and the first DJ set we took some pictures and had time to do an interview with Topic. Besides being the best man, he played the festival on Friday.

The layout of PAROOKAVILLE was a circle around the stage in the middle. Its buildings were the outer ring, and in a circle around the stage were big squares of red carpet. These pieces of red carpet indicated where the party people could stand. With COVID still active, the team behind PAROOKAVILLE didn’t take any chances. Wearing a mask and keeping a safe distance was still a must. With so many people attending the event, precautions have to be taken. You could only take your masks off on the red squares.

Over the course of the two days we saw a broad variety of artist perform their. Most notably W&W, Brennan Hearth, Fedde La Grand and german superstars Alle Farben, Lari Luke and Topic. Most of the streams can be rewatched at the official PAROOKAVILLE site. If you watch the stream you get an impression of what an effort the team put in this operation.

More then 1 million people tuned in for this event. The 2020 lineup will remain for 2021. Small changes might happen, but organizers are confident that the general lineup will be the same. Organizers stated: “If PAROOKAVILLE doesn’t happen, it’s likely that no festival will.” So with that in mind, it is in your hands to #flattenthecurve and save the music industry from collapsing. For more information about next year’s event check: https://www.parookaville.com/en/