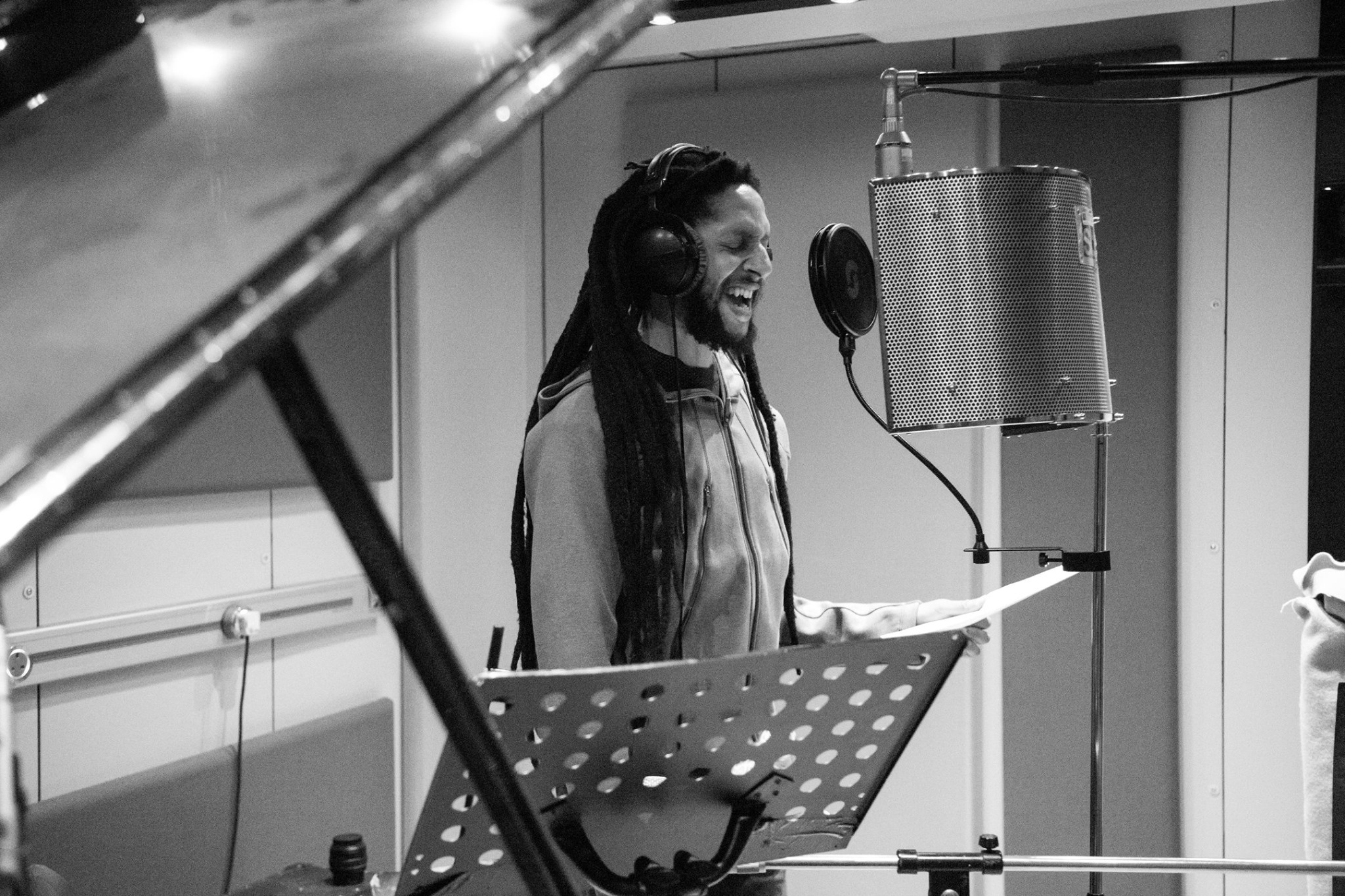 One of music’s must iconic faces, Bob Marley, still remains one of the most talked-about acts in the world. His cultural influence and infectious, fun-loving spirit will live on forever through those who knew him best. Following the death of Bob Marley in 1981, the remaining members of Bob Marley & The Wailers formed The Wailers Band. Since then, the members continue to keep the reggae legacy alive.

The origin of The Wailers dates back to 1963 – and since its inception, the group has seen its share of talent. Starting out with original members, The Wailers consisted of Bob Marley, Bunny Livingston, and Peter Tosh. Fast forward to recent years, The Wailers took their Legend Tour across the globe to celebrate the 30th anniversary of the best-selling reggae album of all time.

The Nocturnal Times sat down with Julian Marley and The Wailers following their performance at Ultra Music Festival’s 20th anniversary, where they performed at the Live Stage. Just before the interview began, the guys and The Nocturnal Times team all sang along together to “Sweet Caroline” for a bit before getting down to business. Read our full interview Q&A with Julian Marley & The Wailers, below.

The Nocturnal Times: How was your set today at Ultra 20. It’s a huge milestone event for Ultra Music Festival, so how was your experience this year playing at the Live Stage?

Julian Marley & The Wailers: Did you all get a chance to check out the show? What did you think of it?

The Nocturnal Times: We did and we really enjoyed it! The crowd was loving it, too! What was it like seeing them singing and dancing along from your perspective?

Julian Marley & The Wailers: When we started the show, I saw the fans started coming over. Then right in the middle of the show, just as things started really going on, I saw all of the kids up there looking at the stage thinking, “what is this? I’ve never heard this before.” We’re up there playing these instruments, and the drums. I’m watching the crowd as we play and I notice one person tell a friend, and then they tell a friend, and it kept on going. They all just kept on coming and from where we were, it looked like they were entranced.

The Nocturnal Times: When you guys play, are there any songs specifically that you always tend to play that get the best crowd reaction?

Julian Marley & The Wailers: “Rastaman Vibration” (1976). For us, we always tend to play that. But really, whatever music makes us get the best vibes on stage. If we’re in the best condition then it wouldn’t be the best for the audience. We want to spread that positive energy.

The Nocturnal Times: What are each of your roles and in what ways do you contribute to the

Julian Marley & The Wailers: We all just seem to really come together! As you know, we are the seeds of “the tree.” What tree is that? The “Bob tree!” Bob put this thing together and Bob first hired me to play guitar in the 1970s. Family Man and all of the other musicians with Bob & The Wailers, and the offspring of Family Man and his brother Aston, and the offspring of Bob. The goal was to spread down to generations, the love of reggae music.

The Nocturnal Times: How long have each of you been together then?

Julian Marley & The Wailers: Well, spiritually. In one way or another, that’s correct. I’ve known his father [Bob Marley] from I was five years old. It was like a family and it still is. We would be at the family’s house and at the studio, which is still where everyone gathers. It was only natural for us to play music together.

The Nocturnal Times: Do you still play your own solo shows sometimes as well or do you tend to stick to performing together?

Julian Marley & The Wailers: Yes, we do! This one was a special event, a special occasion. My father is Family Man, the original bass player for Bob Marley & The Wailers, and my uncle was the original drummer who passed away. So, I’m playing drums for my uncle now – and my father was here today at the show [Ultra Music Festival] – the original guitar player, we call him Blues Man. We want the closest thing we could get to the original Bob Marley & The Wailers for this special show. We figured, since the guys were here, and we can’t jump from one to five, it has to be gradual. It is a honor to learn from them because being around them every day we get a better understanding of how the music came to be how it is. Their personality is how they play. Our thing now is to bring everybody together as much as possible and to have the presence of Bob Marley which is why we have Mr. Julian Marley.

The Nocturnal Times: What do you recall most about your dad [Bob Marley] from when you were growing up? What did he still instill in you that stayed with you throughout your life?

Julian Marley & The Wailers: What my dad [Bob Marley] gave to me is life and consciousness. Some people may never have even met their father, but people may tell them, “oh, you do this just like your father” or “you drink that or eat that just like your father!” That’s just our DNA! They’ll tell me, “you walk like him [Bob Marley], talk like him!” These things are just embedded inside of you and not something that you can really learn. You see, I was only five when my dad [Bob] passed away. So, these traits that we share are just because of our DNA; there’s no denying the DNA.

The Nocturnal Times: Do people often tell you that you do something just like you father [Bob Marley]?

Julian Marley & The Wailers: Well, yeah! But, I don’t really know; I’m still trying to figure it out! But whenever somebody tells me that I do something like my father or my uncle, I take it as a big compliment and think to myself: “wow, I must be doing great!” Why should I try to go start something new when my father already paved the way for something so great for me to continue?

The Nocturnal Times: Besides Bob Marley, where else do you find your inspiration? Who are some of your influences now?

The Nocturnal Times: Going back to that earlier question about what similarities their might be between Julian and his father. Since you grew up with Bob and now you’re around Julian, couldn’t you let us know what traits you notice that they share?

Julian Marley & The Wailers: Well, of course I can! I look at him and we always say, “damn, this boy looks just like his old man!” He’ll do certain things with his hands that are exactly like his dad [Bob Marley] used to do. Without a doubt, he does things and makes moves that are just like his father.

The Nocturnal Times: What types of music or artists are you listening to the most right now?

The Nocturnal Times: Are you guys working on any original projects at the moment that you’d like to talk a little about?

Julian Marley: Yes, I have a new album coming out on July 15 called As I Am. I’m looking forward to that one, as well as releasing some singles that will be coming out this month. One of the singles we can tell you about now that we’re putting out first is “Hey Jack.”

The Wailers: We are also working on a new Wailers CD.

Donald Kinsey: And I’m working on my own Donald Kinsey album, which will have a lot of special guests on it!

The Nocturnal Times: Out of all the shows you’ve played together, do any stand out to you as a favorite?

Julian Marley & The Wailers: That’s the best part about it – they are all different. Even though we might rehearse it, it’s always different. Tonight was a very special night for us and it will be one that we will remember for a very long time. This was a special show.

The Nocturnal Times: Since Bob Marley left behind such a legacy, what is the legacy that you hope to leave?

Julian Marley & The Wailers: It’s all about the good things that you do. For your neighbor, your friends, your family, and even the stranger.