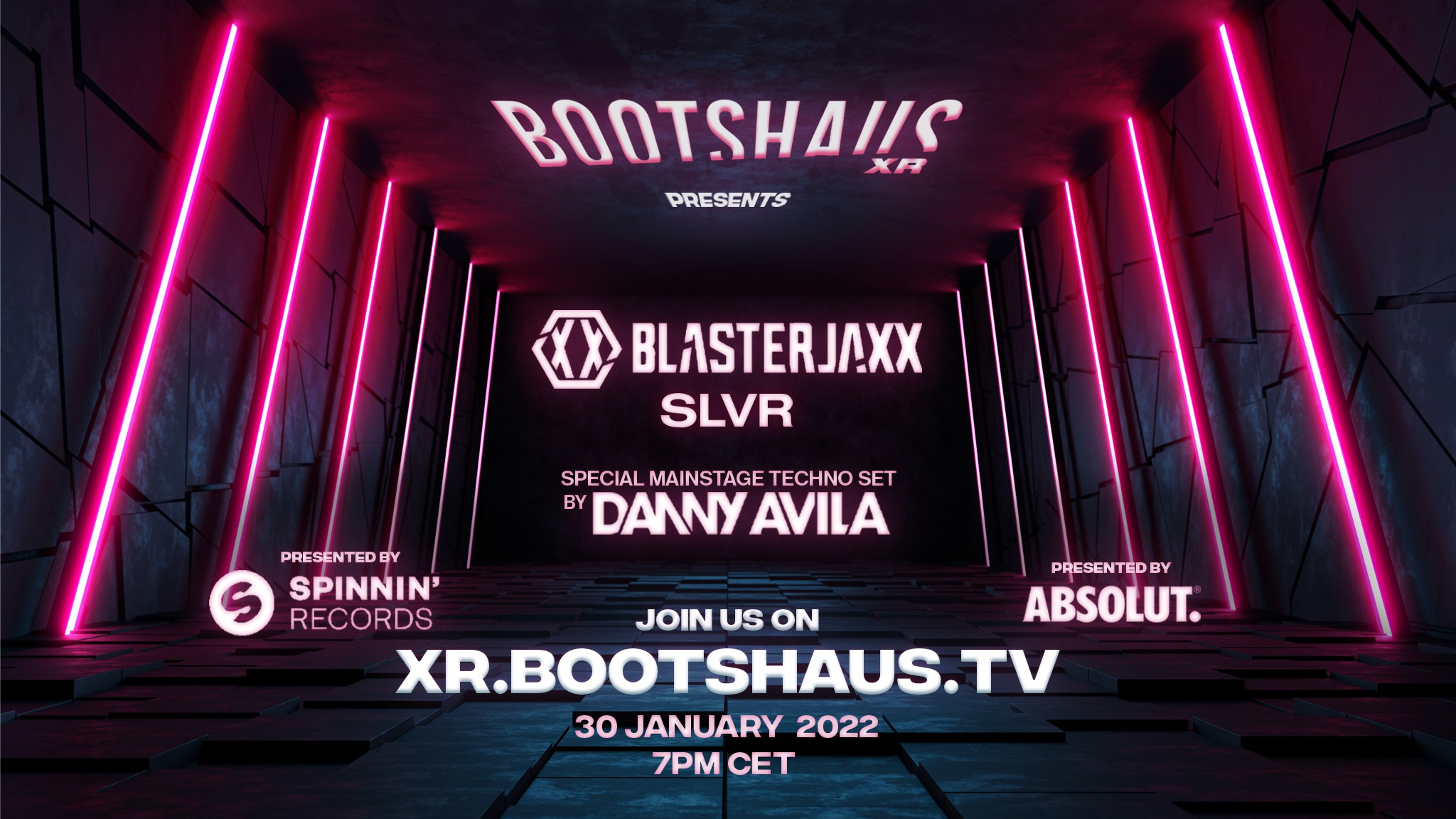 Spinnin’ Records is teaming up with the German worldwide famous club Bootshaus for an exclusive VR event in their new digital club space: Bootshaus XR; Spinnin’ Records Night, presented by Absolut Vodka. During the inaugural immersive event, internationally acclaimed acts, Blasterjaxx, Danny Avila, and SLVR will blast their hottest tracks in Bootshaus’s new digital club space. The event will take place on Jan. 30, 2022 at 7 p.m. CET and promises three hours of the finest electro house music from the comfort of your own screen. If you have never been to Bootshaus, this is your chance to explore the main floor in addition to all the indoor areas of the Cologne club that have been digitally recreated in the metaverse. All attendees will have the opportunity to move freely and interact with each other, creating an experience similar to the real life clubbing scene. Spinnin’ Records Night at Boosthaus XR is free of charge, as the event runs in a normal web browser and can be followed on a PC, laptop, smartphone or tablet- regardless of the operating system. The event will be VR-enabled without the need for a download. Many interactive elements invite visitors to explore the digital twin of the legendary club.

In addition to the main floor, all indoor areas of Bootshaus will be digitally recreated in the near future, further expanding the area with two more floors and interstitial spaces where attendees can move freely and interact with each other, similar to a real life clubbing experience. Bootshaus is thus expanding its pioneering role in the Metaverse as a provider of fully digital club events.

The XR event will be opened by internationally renowned EDM DJs Blasterjaxx and Danny Avila – both ranked among the DJMag Top 100 DJs. The Dutch duo Blasterjaxx, who have become frontmen in the EDM scene within just a few years, promise to bring their signature brand of titanic beats into the Bootshaus metaverse. Tom Jongkind and Idir Makhlaf are known for their energetic tracks that captivate audiences with explosive drops, big riffs and the catchiest melodies. The duo’s breakthrough came with the 2013 release of “Faith,” which not only became a major chart hit in the Netherlands and Sweden, but led to collaborations and support from artists such as Tiësto, David Guetta, Afrojack and Nicky Romero.

The duo is supported by Spanish DJ wonder Danny Avila, whose attacking sounds and unique DJing style make him one of the most sought-after up-and-coming artists in the scene. He combines genres from techno and big room to tech house and trap in a unique way and always manages to put his audience into complete ecstasy.

The cherry on top of the Spinnin’ Records Night lineup is the surging bass-house maestro SLVR, whose signature “booshi” sound has been turning the heads of everyone from Afrojack to Martin Garrix. With a new collaboration alongside rising talent offrami on deck, SLVR’s smooth club beats make for the perfect complement to Blasterjaxx hands in the air, big room productions.

The Spinnin’ Records Night takes place in cooperation with Spinnin’ Records and Absolut Vodka. On the occasion of the event, an exclusive NFT special will be developed in collaboration with the American artist James Haunt and will be available on the world’s largest NFT marketplace OpenSea.

To tune in to the Bootshaus XR event click; here.

Related Topics:blasterjaxxbootshausDanny Avila
Up Next