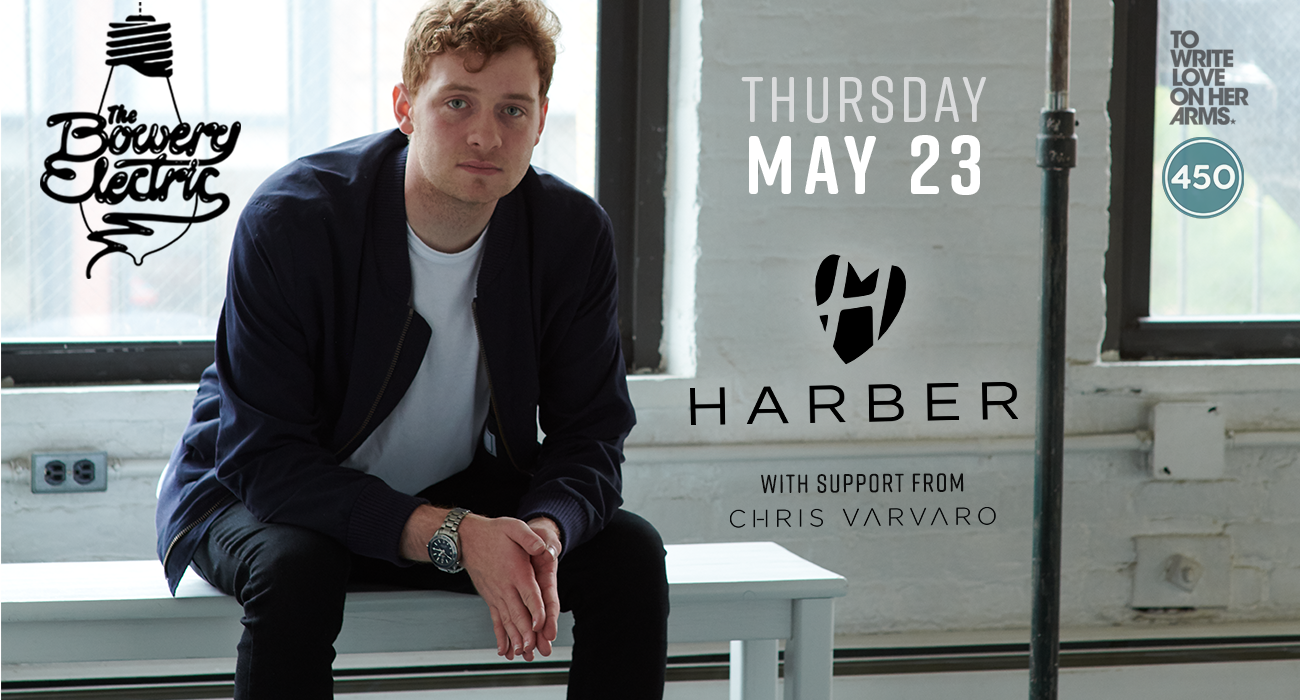 New York’s own 22-year-old DJ/producer/musician talent, HARBER, makes his hometown return with a headline show at The Bowery Electric. The Nocturnal Times has partnered with HARBER and The Bowery Electric to offer a pair of tickets for the pre-MDW event. Limited $10 tickets are available HERE.

May is Mental Health Month so for his May 23rd show, HARBER & The 450 Group is supporting TWLOHA by donating half of all ticket sales to the non-profit organization. This event is presented by The 450 Group with support from Chris Varvaro. Come join us & come dance for a great cause!


To Write Love on Her Arms is a non-profit movement dedicated to presenting hope and finding help for people struggling with depression, addiction, self-injury, and suicide. TWLOHA exists to encourage, inform, inspire, and also to invest directly into treatment and recovery. For more visit http://www.twloha.com.

On Thursday, May 23, join the multi-faceted artist for what’s sure to be an eclectic mix of electronic originals, remixes, and mash-ups. HARBER, who previously released on PRMD Music (“Me and My Friends” feat. Angel Taylor), an imprint made famous by the late, great dance icon Avicii, has been making waves within the EDM community.

HARBER’s latest single “More Than You” with Lexy Panterra has released via 450 Music with a stunning music video, and remixes from Modern Machines, AmPm, MIMO, and HARBER himself. Already in rotation on dance radio and more than 30 US Top 40 & Mix Show radio stations, “More Than You” is headed straight to the top as HARBER and Lexy make plans to release an acoustic version of the single before the summer. The single just made its debut at #50 on the Billboard Dance Club Songs chart.

Watch the new “More Than You” official music video, below:

With additional tour dates soon to be announced, as of late, HARBER made his Miami Music Week debut at the Shore Club for Moksi & Friends, playing alongside Moksi, Curbi, and Born Dirty, as well as a show alongside The Him. With previous remixes for The Chainsmokers, Dan + Shay, Khalid & Normani, NOTD & Bea Miller, Prismo, and more, under his belt, fans can expect to hear some HARBER’s notable remixes as well as some brand new, unreleased, and soon-to-be released remixes and originals.

Enter to win a pair of tickets for HARBER at The Bowery Electric from The Nocturnal Times:

Advance tickets for HARBER at The Bowery Electric on 5/23 are available for $10, HERE. Limited $15 tickets will be made available at the door. Opening and support set from Chris Varvaro.

Listen to HARBER x Lexy Panterra – “More Than You”