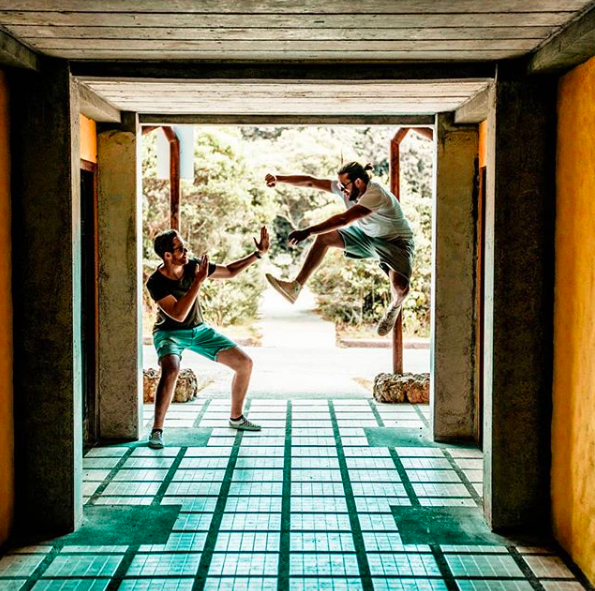 The Him Carry Extraordinary Energy During Miami Music Week [Interview]

A name that the electronic music scene has delightfully come to know and love, Dutch DJ/Production duo The Him have been on a roll with 2019 festivities thus far, including taking on another Miami Music Week with extraordinary energy.

Adventuring over to Miami with an arsenal of new music including “Nothing On Us,” “Unstoppable,” “Look At Me Now,” and their latest irresistible collaboration with Loote for “Tell Your Friends,” The Him held down a stunning presence all throughout the week’s celebrations. From their kickoff party at Spinnin’ Records signature Spinnin’ Sessions event, to vibing out at Klingande’s Playground Pool Party, to bouncing around and supporting fellow friends/artists shows, the guys lifted up spirits at every stop along the way.

The Him have grooved their influential sound and radiant live performances into endless spheres across the world, gracing the airwaves with blissful records to last a lifetime. One thing that can’t go left unsaid is The Him’s magnetic aura to pulling crowds into dancefloor heaven. The Him prove time and time again their creative musical savviness in fusing together a serendipitous mix of heartfelt lyrics that fans sing their lungs out to, in tandem with throwing down plenty of hard-hitting drops and exhilarating rhythms that ultimately form flawless sets. Diving deep into a journey of music and evolutionizing their craft, The Him are surely stirring up more surprises to fill 2019 and leave long lasting memories the world won’t soon forget.

It’s always a pleasure sitting down and chatting with these guys – read on and catch a glimpse of all things Miami, touring, and new tunes to come for The Him 🙂

The Nocturnal Times: Welcome back to Miami Music Week! Tell us what you’ve been up to since arriving here in Miami?

The Him: Thank you! The sun is shining, we already ate some great food so it’s pretty good. We’re getting accustomed to it definitely!

The Nocturnal Times: What can the crowd expect today from your kickoff show at Spinnin’ Sessions?

The Him: Some new music! “Nothing On Us” is doing really well, it’s still on Billboard Charts and even reached the Top 10 so we’re really happy with that.

The Nocturnal Times: Spinnin’ Sessions is a major highlight of Miami Music Week for fans with tons of top-notch artists. Where will you guys be for the week & will you have time to check out friend’s performances as well?

The Him: We’re going to be pretty much everywhere. We’re going to a bunch of interviews, then going back to the stage to see some of our friends as well as some other parties. That’s the fun part about this week.

The Nocturnal Times: Sunday is your set at the Klingande Party. How will that one differ from Spinnin’ Sessions?

The Him: It’s probably going to be a bit more deep. Spinnin’ Sessions is more of the harder stuff but it’s sunny and we’re also going to make it a bit of a chill pool set today too.

The Nocturnal Times: How did your collaboration with Loote come about for “Tell Your Friends?”

The Him: I think we got sent the song and vocals for that one probably more than a year ago. We’ve been working on it for quite a while. It just took a while to find the right vibe and to get everything done to get it out.

The Nocturnal Times: Talk to us about your recent time & experience in Costa Rica?

The Him: It was actually really special. It was our first time and we had some time to do sightseeing. We went to an active volcano, we went to a waterfall, and went on for support for Don Diablo. The crowd was insane, they were so into it so we had a great time! We were there for two nights which is nice because then you have a little extra time to see something. We had the best uber driver there…the uber driver showed us around and took us around all day haha. The volcano is an hour out of the city so we thought we’d go and get an uber back but he was like I’ll wait for you guys! He took us to a nice restaurant, he was great. He was making music too and we played his own stuff too haha!

The Nocturnal Times: Let’s talk touring! Which shows & festivals do you have lined up for the coming months?

The Him: This week we have a couple shows at Miami Music Week, next Thursday we are off to Bali to play Omnia. On Wednesday we go to Vietnam, Saturday we go to China to play Chengdu’s Creamfields festival so that’s really really dope. We’re really excited about that one because it’s our first time. Then we’re going back to play King’s Day (Kingsland) in The Netherlands…there’s everything there. It’s like a flea market and everybody’s selling their crap everywhere. There’s parties and everyone’s drinking in the streets, there’s boats in the canals and it’s really fun. We’re also playing Hangout festival in May, it’s our first time there as well!

The Nocturnal Times: What do you guys think about all the changes for Ultra & its new location this year?

The Him: It’s not about the location. The location is cool but it’s about the festival and the people that go there. It’ll be different but I think people are going to make the vibe anyhow. A new generation won’t remember that it was in an old spot. (Sascha de Jong, Miami Beats Record Label): I think it’s the fourth of fifth time they’ve changed locations, I mean back in the day Ultra started out at the beach, Miami beach! It’s just become so big that it can’t be at the beach and it can’t be in the city so I think Virginia Key is actually a good option. They aren’t bothering anybody, there’s no big skyscrapers around it with rich people complaining haha so maybe they finally found a good location.

The Nocturnal Times: Are there any surprises you can hint to for collaborations this year that you’re looking forward to?

The Him: There’s definitely things coming up! We’re doing a bunch of cool songs that are coming out. On May 3rd we have a new release “Found me” which we’re playing today – we’re playing in half an hour!