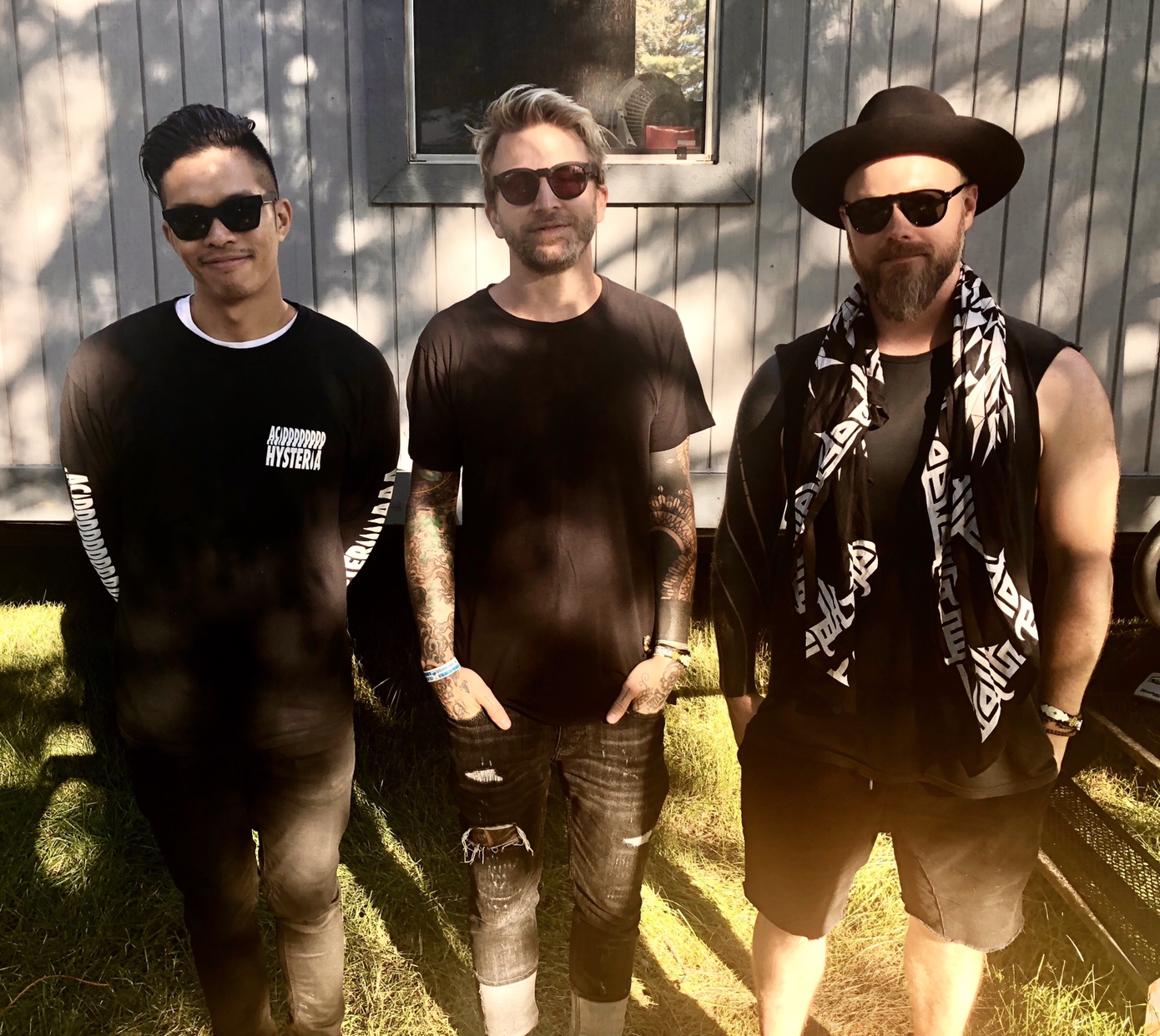 Following our previous post, “The Glitch Mob: This is the Year for Electronic Trio,” we had the thrilling opportunity to spend some quality time with the LA-based masterminds behind it all right before their highly-expected set at Electric Forest to truly grasp their current reality. With so many exquisite accomplishments throughout these past couple of months alone, the rest of 2018 has so much more in store for these tremendous musical inspirations.

The Glitch Mob’s second performance at Electric Forest during weekend two was the final stop on their latest tour alongside electronic star Elohim, but they are not done just yet. This upcoming September, the trio will be hitting the road once again to present their Fall North American tour throughout other grand cities that have not yet been able to witness their extraordinary talent live. Their most recent collaboration with TheWAVEVR team also gained extreme worldwide attention, as they are the first electronic artists to truly immerse fans into their exotic musical sounds through a panoramic dreamscape of virtual realities on their show, ‘The Glitch Mob X TheWAVEVR’.

Behind every success lies a unique story to tell, and The Glitch Mob was able to share their story with us and explain what ignited the strong backbone behind their prosperous music career. From first collaborating, to headlining prestigious music festivals and working with GoPro, the guys have come a long way from their early years. Read all about The Glitch Mob’s story, the success of their ‘See Without Eyes’ album and latest tour with Elohim, an inside scoop on what went on behind the scenes working on their virtual reality show ‘The Glitch Mob X TheWAVEVR’, and a sneak peek on what is to come throughout their upcoming Fall North American tour in our recent live Nocturnal Q&A below:

The Nocturnal Times: How did you guys meet and first come together as a trio?

The Glitch Mob: We started off as an individual DJ collective, and at one point we decided to do a show together that a friend of ours booked us to play and we thought it was a lot more fun to do it as a group than to play individually. We all came together and started mixing around as we traveled together, and the music just kind of came around in the same way. We were all solo producers, but we really enjoyed collaborating together and the essence of what it’s like to make music with people that you trust, care for, and have similar taste in. It’s just a lot more fun that way.

The Nocturnal Times: How did the name The Glitch Mob come about as your stage name?

The Glitch Mob: The whole “glitch” concept was kind of like a technique that we used when we first started producing music. All three of us would perform the same edgy cutting and editing techniques, and as time went on we were just known for that glitch-induced genre. This was like 12 years ago when we first started producing music and it just came about in a joking manner, but somehow it ended up becoming our official stage name. It was all unintentional and it was just the way things worked out for us.

The Nocturnal Times: In terms of your unique genre, is there specific artists who inspired your sound? How did your sound come about?

The Glitch Mob: Not really, we were just inspired by life. The big picture came simply from the concept our emotions and feelings and just riding along the ride of life. We have a lot of influences, but its hard to sum it up to just a few artists that we look up to the most. We based our sound just off of our personal ventures, and just want to be able to tell our story through tones, rhythm, and chords. That’s really the inspiration behind all of it. We are definitely heavily influenced by electronic and early rave music, punk/rock, and ambient music. Our Venn diagram truly overlaps, and that’s why our sound is uniquely Glitch Mob.

The Nocturnal Times: How would you describe your experience so far and overall outcome of the tour you are currently on?

The Glitch Mob: The tour has been amazing so far. We spent a year and a half writing our music in the studio and the reward now is to come out on the road and play our music for the people and get to experience the music with everyone. Sharing those live moments with our fans, that’s what it’s really all about. Getting to connect with the audience and see all the smiles on people’s faces is success all on its own. We gain such a great feeling of gratitude from these moments.

The Nocturnal Times: What has it been like working alongside Elohim throughout your current tour? How would you describe your relationship with her?

The Glitch Mob: She’s incredible, we’ve grown to really love her. She’s an amazing friend and such a special person. We’ve shared a very creative connection with her.  She truly inspires us and we’ve gotten to perform with her every night, and inevitably we’ve just grown so close as both artists and friends. She’s one of the best live performers we’ve seen in a while, and getting to share the stage with her has been incredible. Just wait until you hear this thing we’ve been working on…

The Nocturnal Times: Your ‘See Without Eyes’ album became a really huge hit and was even featured in its own virtual reality show ‘The Glitch Mob X TheWAVEVR’. Did you guys have any say in what the outcome of the show would look like? Did you have the chance to personally design the visuals and dreamscapes within the show?

The Glitch Mob: The way that we usually collaborate with other artists is with people we have a mutual connection with. We always want to trust everyone, from the creative artists to the visual artists, so we were definitely involved in the whole process from the imagination aspect of things to the coordinating everything. This project was a world that we created sonically and then TheWAVEVR team came in and put their spin on it with their innovative technology. We were there to help mold the whole thing and really get people inside the music. We’re actually hoping to bring this experience to some of the bigger shows in our upcoming tour to get fans to experience this exciting creation.

The Nocturnal Times: Most artists take a year or two off before touring again, but you’re jumping back into it right away. In regards to your upcoming fall tour, what differences will we see in contrast to the tour you were just in now?

The Glitch Mob: We’re actually not totally sure, we just wanted to get through this tour first and then go from there. There won’t be many big changes, but there will probably be different visuals and several song choices that will be swapped around. We haven’t really talked about it honestly, we just planned the tour and want to take what we’ve been doing the past couple of months and keep it going. We wanted to hit other cities that we didn’t get to previously, specially the big ones like New York City since we have’t done Brooklyn Steel yet so we’re excited.

The Nocturnal Times: For your upcoming fall tour, we know you guys have ‘The Blade 2.0’ stage production planned. Can you describe it more profoundly for us so that everyone can grasp what that stage design is truly all about?

The Glitch Mob: ‘The Blade 2.0’ is basically the second coming of the Blade 1.0 from when we toured the ‘Love Death Immortality’ tour, and essentially at its core it our own custom stage instruments that we perform our live music on. It lets us perform our music with the energy of a rock band but obviously we are electronic artists so it allows for that harmonizing merging of the two. Being able to translate the energy and the power of a live band on stage to an audience and connect with the audience in that customized way, that’s what ‘The Blade’ is really all about. We got ‘The Blade 2.0’ here at Electric Forest, so we’re excited to share this with such an organic crowd.

The Nocturnal Times: What are you guys looking forward to the most in playing here at Electric Forest?