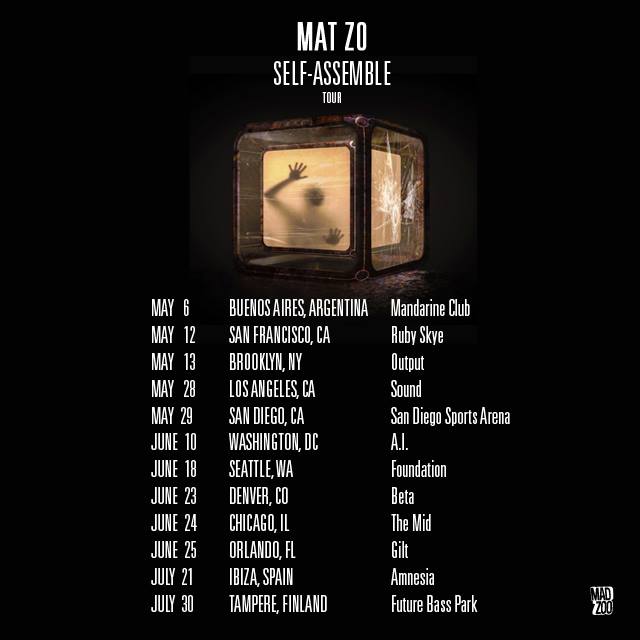 When Mat Zo’s Self Assemble album released on March 25 it was an instant top album of the year and still holds true thus far. Mat Zo’s first album, Damage Control, was a critically acclaimed hit and fans were anxious to hear what the second workings of Mat Zo would finally sound like. To celebrate the success of his #1 iTunes Electronic Chart album he now is bringing that fresh new material to 12 different spots around the world, with more dates to be announced.

Mat Zo had previously been in San Francisco at Ruby Skye kicking off his US stretch of acts, and caught Brooklyn’s chic Output Dance Club the next day, Friday May 13. This specific stop was Mat Zo’s first time performing as the headline act for the night in this venue. To join him for the eight hour event were the likes of Anjunadeep rep Beckwith and local favorite Alexander Technique. Providing the ideal warm up and closing sets for such a peculiar artist in the realm of Output is no easy task, but the two made for a well flowing night from open to close.

Around the 2am mark Mat Zo approached the stage and could be seen observing from the side of the DJ booth waiting for his turn on the decks. The already veiled Output grew even darker as he took to the mixers. With Output being a club that holds true to underground dance culture and Mat Zo self-releasing his second album Self Assemble, the setting expressed musical freedom enabling the talented and well versed producer to play a wide variety of tracks.

Mat Zo brought the Brooklyn crowd up and down throughout the night teasing attendees with edits on tracks like the echoing vocals and culling siren build of the Ramiro Lopez & Coyu Suara single “Y.E.A.H.” Paying respects to his opener, Zo played the tempting whispers of Beckwith’s “Desires,” heating up the early summer night. The night’s climax came with the 2012 Steve Angello remix to Armand van Helden’s “Everytime I Feel It,” mixing slyly into the fresh 2016 absolute house gutter “Right Here” from Billy Kenny & Aaron Jackson. Of course no Mat Zo set would be complete without his own funkified material. The mood couldn’t have gotten any better with the new original “Soul Food” playing towards the end of the night. To close out the set he played an Above & Beyond classic “Walter White” as he stepped down from the podium.

The night served as the perfect mixer of dark house and techno beats to the jubilant sounds of Mat Zo’s Self Assemble. Fans from around the city gathered to see one of electronic music’s truest and articulate producers there currently is.

The Self Assemble album tour has nine more scheduled stops between now and the July 30 finale in Finland, but Mat Zo said more dates will be announced soon.