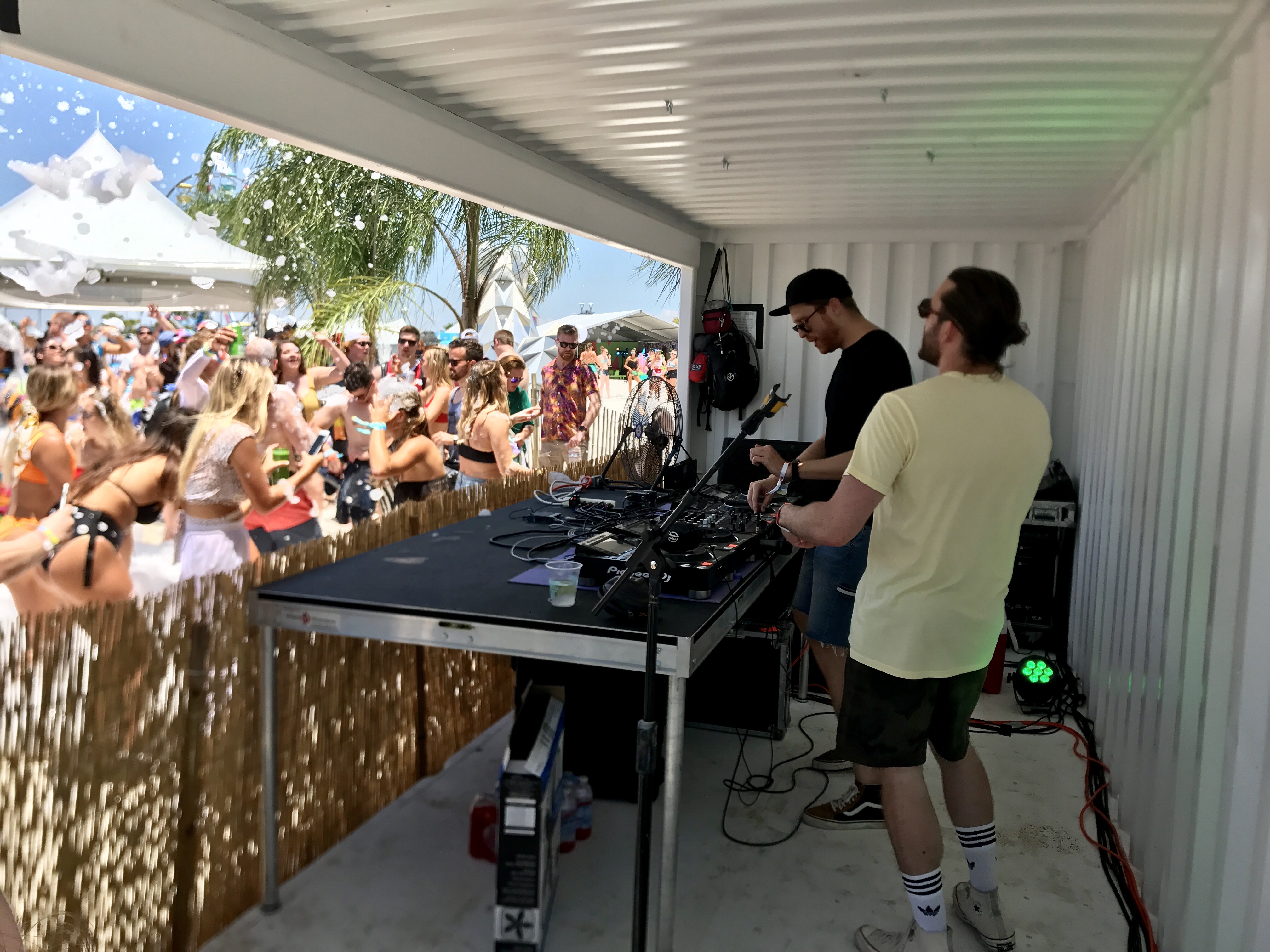 Music festivals have become one of the world’s most treasured escapes, and no, this time we’re not here to review Hangout Festival. This time we’re highlighting the one act who swept through Hangout on a whimsical fairytale note – quickly leading us to realize the only way to share our experience is through a story 🙂 So sit back, relax, and dive into our debut ‘Hangouts with The Him’ session!

Touring over to Gulf Shores, Alabama was The Netherland’s diamond duo The Him, who managed to journey from the cozy and intimate setting on the white sands of the Monster Stage, to a slot at the ever-thrilling Boom Boom Tent, to a powerfully addictive set at Mainstage, to closing out festivities back at the Monster Stage beneath breezy palm trees. It was a whirlwind of music and performance by The Him from Friday to Sunday as the guys worked every crowd like magic.

The only Dutch group to play Hangout this year, they were not only standouts from the rest, but a magnificent representation of the world-class talent Holland flaunts better than any other country in the world when it comes to dance music. The Him held down one of the handful of DJ Residencies at Hangout, and it’s safe to say their presence over the course of its three days was simply delightful. Leaving fans on a cliff hanging note for every next set of the festival, here’s a glimpse into our realm of all we experienced together!

Sunshine, ocean breeze, a stage on the sand, bass on blast, and coronas in our hands…sexy ambiance = check:) The Him kicked off with 360 degrees of electric music striking through the atmosphere, and our minds were racing with all the excitement to come over the next few days. We all had a blast exploring the festival grounds on opening day and catching more sets including our collective firsts seeing The 1975 and Travis Scott.

If the Boom Boom Tent could have had a heart, it would have been beating out of its chest. These guys NAILED IT! They had fans’ brains & bodies on lock featuring fellow artists’ songs like Calvin Harris’ “This Is What You Came For” and their own anthems “Nothing On Us” and “Always” just to name two. One of the more special moments of the night came later as Kygo dropped The Him’s remix of “Kids In Love” which was a touching surprise.

Yep, we wished this day would never end. The day began with an additional and unexpected The Him set at Mainstage, which was a positive indicator for the remainder of the day to come. Mainstage roared with The Him b2b Black Caviar b2b CRAY…need we say more? It’s an amazing feeling being part of a crowd that can’t stop dancing with hands in the air and losing ourselves in the moment, and that’s exactly the feeling we all had. In between sets Steven & Jay made an important detour at the puppy kissing booth, where they scored some precious playtime. Golden hour & sunset saw The Him’s final set back at the Monster Stage, all leading up to us watching The Lumineers for the first time and ending Hangout Fest under a sea of radiant fireworks.

Good vibes poured in all weekend long, from experiencing pure joy swoon over crowds, to the blissful energy in the air during their performances, to special moments infused into each of their four sets. Steven and Jay were the perfect pair to climb the ranks of Hangout at an unparalleled high. Crafting every single set with masterful touches, they took on Hangout’s adventurous possibilities and turned them into grand-slam victories.

“Hangout Festival is for sure the best hang we ever had! Vibing and partying on a beach, people are going hard at stages, and the food was mind-blowing! We can’t wait to come back.” -The Him

The Him knew just how to put smiles on everyone’s faces as they mixed together their irresistible catalogue of dancefloor staples like “Nothing On Us,” “Broken Love,” “Oasis,” “Unstoppable,” and “Feels Like Home” among tons more. Their own favorite remix of Martin Garrix’s “Name Of Love” appeared in all four sets, and they were possibly the only ones who threw down none other than an everlasting tune of life “Reload” by Sebastian Ingrosso, Tommy Trash & John Martin. The Him brought thousands of fans together at Hangout to celebrate our love for music, and this one is certainly one for the books.

So, after a weekend of running around like kids on a playground, lots of laughs, too many peanut butter cookies, and endless music, we couldn’t have asked for a better start to Summer 2019 than in golden sunshine, under blue skies, and on the beach with The Him.

Until next time Hangout,