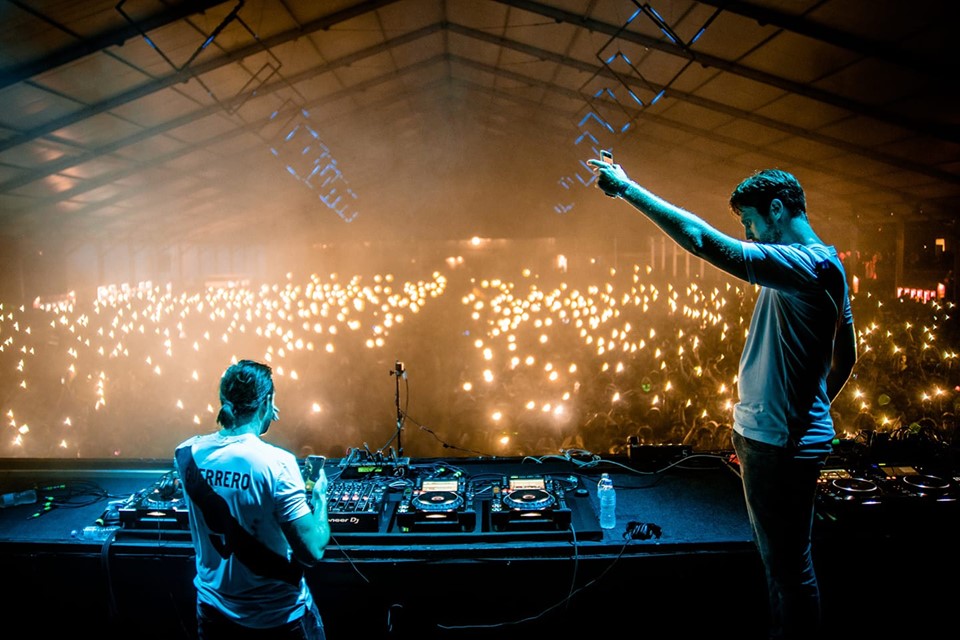 If you haven’t by now, it’s time to dive into the darling world of electronic DJ/Production duo The Him. Recognized across the globe for creating desirable ambiance in both their larger than life live performances as well as in their catalogue of lush records, The Him continues to delight the scene by crafting charming musical experiences time and time again.

2019 has seen a buzzful string of releases by The Him including “Walk Alone,” “Found Me” featuring Maria Hazell, “Tell Your Friends” featuring Loote, and “Unstoppable.” With these new originals and collaborative numbers already woven into this year’s repertoire of glowing tracks, The Him’s tour stops have also boosted 2019’s high to an exciting level. From roaring club nights around the U.S in Denver, Arizona, and Los Angeles, to grandiose festival appearances at Creamfields, Hangout Festival, Summer Sound, and Findings Festival among others, the duo’s presence has been at the forefront of 2019.

The Him breezed through their home city of Amsterdam in another lively edition of ADE, including competing at the Spinnin’ Gaming Tournament, and a heart-soaring set at Skyline Sessions by Lucas & Steve. It was an amazing night seeing Jay and Steven play together on stage, as the two are winding down shows together come the end of November. The guys recently made the decision to split things up into Jay holding down more studio time while Steven continues to tour, all part of a bigger plan to take The Him to the next level in music, so rest-assured, the best is yet to come.

There are some artists who have an undeniable aura of good vibes and positive energy whether it be on stage, behind the scenes, or in the studio, and The Him fits that description like a perfectly fitting puzzle piece. Manifesting their visions into reality of producing music that amplifies energy to a tee, Jay and Steven of The Him are keen on setting the bar high for future visions and knocking their goals out of the park. Read on in our interview below to see what’s in store for The Him:

Nocturnal Times: Welcome to ADE 2019! Tell us what you have going on for the week?

The Him: We started off with some writing sessions and that was a lot of fun. We did four days of studio and even did a pitch for a car commercial which was actually really funny. We were locked up in the studio together with Jordan Jay and we made three little ideas that could be on a new car commercial next year, so we’ll see about that! We wrote some new songs and it’s all really cool.

Nocturnal Times: Talk to us about how your newest single “Walk Alone” came about and the story behind it?

The Him: We started working on that earlier this year and it’s obviously a really cool vocal. It kind of has that big dance vibe that we really dig and takes us back to a few years ago when it was more “edm-y” and we wanted to build something like that as well. We’ve been playing bigger and bigger shows so we wanted a sound that was maybe a little bit bigger that’s not just deep but also pumping. We really wanted to try something with big lead lines but still be organic, so there’s all sorts of weird sounds in there like whistling and guitars, it’s all to give it a little bit of a different kind of vibe. That’s been really fun and it’s been doing really well. It got picked up by a few radio stations, BPM is playing it and it almost has a million streams so it’s all cool.

Nocturnal Times: We last saw you guys at Hangout Festival in Alabama, can you recap the rest of the summer? What were some standout crowds or shows that you did after Hangout?

The Him: To be honest we had a pretty chill summer. We played some stuff in Europe and played Latvia for the very first time. It’s beautiful with hills and all green everywhere and it was a festival on the beach with about 25,000 people, it was a lot of fun and people were stoked wanting to party hard. We also went to Austria and the last show we did was in Paris a couple weeks ago, honestly, things really start to blur together!

Nocturnal Times: We definitely want to talk about the new dynamic you having going on & the decision to have one of you stay on tour, and one of you stay in the studio. What is some of the reasoning behind this and what’s the plan from here?

The Him: I think the start was us talking earlier this year about what the next move and the next step is going to be to bring The Him to the next level. Jay: I really wanted to have a little more time in the studio because I love the performing, we both love to be out there, but with all the travelling and all the being away it becomes harder to be fresh in the studio and we have goals you know? We want to release a single every two months, we want to do hopefully six remixes a year, and we want to do more collab tracks next year which are definitely coming. We felt like right now if we split up our time like that, combined with Steve being totally open to doing the touring and me willing to go more in the studio, we can try that and see how it goes. We’re going to attack it from two angles so it’s a big transition for us both. It’ll be different for Steve to be on the road alone but it also has a lot of opportunities and we’re pretty excited about it. The idea is that we’ll play all our shows together until the end of November and then for at least a year we’ll split up. We’re still neighbors so we’ll see each other a lot! Haha.

Nocturnal Times: Tracing things back to your original visions for The Him, did you ever expect that this situation could happen? Did you get together wanting to just make good music together and see what happens? Or, did you have big plans for major touring and all that has happened since you started?

The Him: When we started out we both took it really seriously, and we still do but the start is a whole different ball game than the point we’re at now. In the beginning you’re looking to reach out to labels and such, and the first two years we decided to only work on the music side and make that better. When it was at the point we thought we should release the first bootleg remix we caught a bit of attention, and from there it got more serious. I think now we’re at a point where we really want to take things to the next level. We want to get more reach with our tracks and reach more people. We want to try and play the bigger shows and the musical side is a really big part of that.

Nocturnal Times: Jumping off of that into more label discussion, have you ever thought about starting a label or any sort of mentoring? Especially being in Amsterdam where there are so many younger artists aspiring to DJ and produce, it seems like a great place to start this.

The Him: We used to have a label and we actually still have it, it’s called Daily Deep and we did it for a while. There’s been some young and upcoming guys that we’ve been in touch with a lot like Jordan Jay and some other guys as well along the way that we’ve helped. Sometimes it’s about contracts and what to do, sometimes it’s about panic attacks haha, sometimes it’s about management or production stuff as well. We’d love to do more of it and all of these ideas are so fun, but just to do our own thing is very demanding already. To be honest we really want to do it in the future, that’d be a dream to mentor young guys and help them out, that’d be great. It’d be so cool at a certain point to have a couple of studios with young people working with you and be able to share everything about music and the industry. First we need to focus on getting all the experience yourself, because we don’t want to just talk we want to actually do it. It’s much easier if you can mentor kids and young talent if you’ve done it yourself before. It is funny that you ask though because it has always been kind of a dream from the beginning.