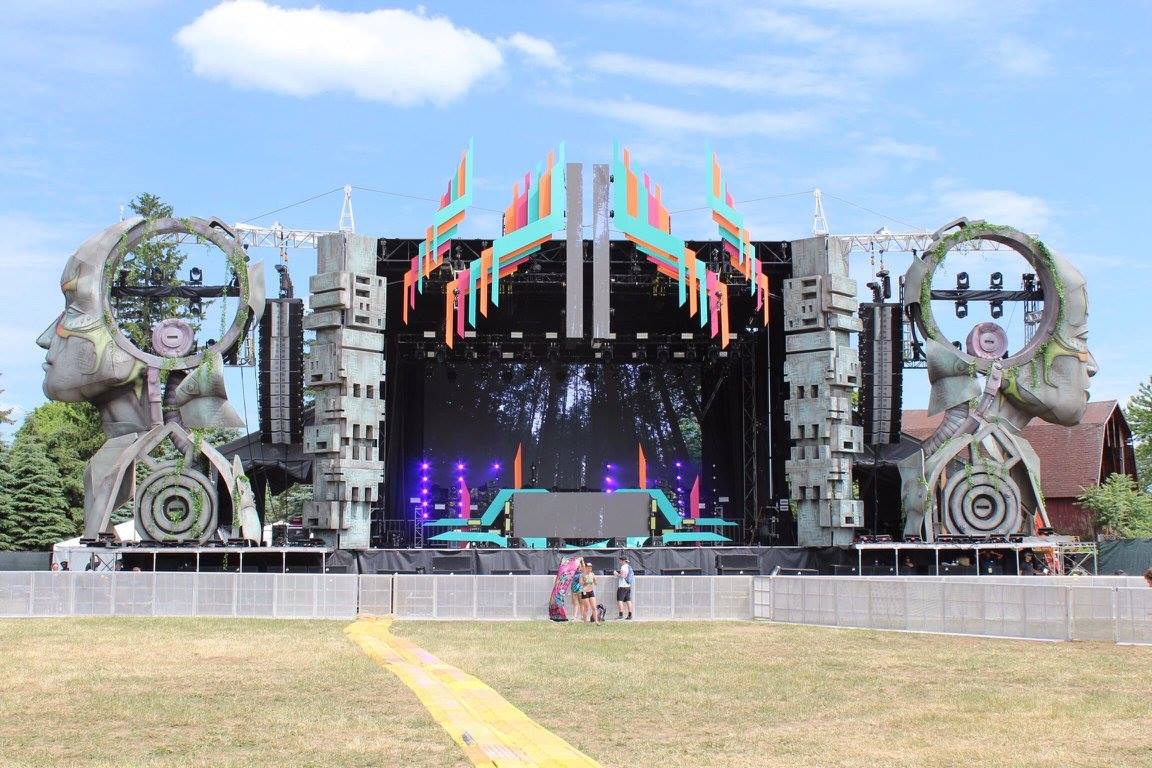 June 23-26 brought the most exciting Electric Forest installment to date with the 6th running of the ever-evolving summertime immersive festival.

The name “Electric Forest” resonates with people from all walks of life. It doesn’t matter if you’re a club hopping fan from a major city, a seasoned camping festi-goer, or someone who’s looking to attend their first musical event; you have heard of Electric Forest. There is no music festival of its kind in the comforting niche of musically centered outdoor festivals. Starting in the year of 2011, Insomniac Events and Madison House Presents have set industry standards and pushed the bar creatively in the festival game. Festivals like EDC Las Vegas and Ultra can fight it out over the mightiest EDM festival there is, but for holistic musical gatherings, Electric Forest has no competitor. Bringing new tricks up it’s sleeves and still carrying its small prominent roots born over five years ago, Electric Forest returned this year with another escape from reality.

For the first time ever public GA camping opened up on 12:00pm the Wednesday before the official start to Electric Forest 2016. To no surprise the Early Arrival camping passes were soldout quickly after their release. The flow of traffic was non-stop, a whole day before the first set had even been dropped. Attendees piled in and built their stations early and get the first peep of the Main St drag and enjoy some makeshift pre-festival fun.

The brave souls who entered in on Wednesday were embarking on a five night journey into Electric Forest 2016. They were rewarded with some of the best camp spots in the lot, and got to enjoy some old fashioned camp out parties in preparation of the opening of the gates. Apparel and accessory tents were already showcasing the latest in festival wear and all the eateries along the main strip were pushing out fresh food. Two new additions for the Main St strip included two massive taco shape structures, giving ample shade for people enjoying the vendors or looking for a quick bite.

If you were looking to get down on Wednesday night all you had to do was follow the music. Numerous pop-up parties were kicking off, with one of the larger ones coming from the side of the RV camping. Hearty house tunes dominated the air waves as they had a full deck station and speakers atop their RV, marked with a makeshift peace sign. A crowd gathered, totems and all, in the warm up to Electric Forest 2016.

The gates for the rest of the campers opened up at 12:00am, the earliest time people have been able to enter since the inception of Electric Forest. Regular GA campers joined the line with the last of the Wednesday entries. The site was still filling in during the later part of Thursday. Every spot was filled all the way to the outskirts of the massive campground of Double JJ Ranch. The early arrivals had the luxury of catching a full morning/early afternoon rest in preparation for the grand opening of Electric Forest.

The actual line to get into the festival seemed endless, it was stacked well into the Main St drag as everyone wanted to share those initial Electric Forest moments together. Up front the Electric Forest’s Queen and her Jester played host to a talent show. The Jester cheered the crowd and asked for participants to come forth and showcase their hidden talents. A minnie mouse approached and hooped away as the crowd clapped along, followed by an acrobatic fan doing stunts, and an inspiring young man reciting some words of wisdom. Magic was already stirring before Electric Forest 2016 had even officially been opened.

To kick things off for Electric Forest 2016, the Anjunadeep team had the first stage all to themselves. The massive Tripolee stage, located directly to your right upon checking in to the festival grounds, had the new star Yotto touching the main stage’s decks for its first set of Electric Forest 2016. The mood couldn’t have been any brighter as the sun beamed on the thousands of smiling fans and Yotto played the jungle house Beatless Bonus version of Mirko Loko’s “Love Harmonic.” In what was a common theme amongst all the Anjunadeep performers, the sets had an extra jungle, Latin, and African flair to them. Between the prime summer Michigan weather on that first Thursday and the grooving house beats from Anjunadeep, you had your own sun kissed oasis at Tripolee stage.

The Ranch Arena stage, the central main stage of the festival, wasted no time in getting the energy going as bass-heavy acts Party Favor and Paper Diamond tore up the stage. Ranch Arena played host to arguably the festival’s biggest and most iconic names of the entire weekend. What So Not put on a pre-dawn set that included a top selection of favorable future bass tracks and original productions. The 2015 hit “Lovesick F**K” by Mura Masa gave everyone a familiar light hearted beat to follow along with before bobbing to one of the best remixes to come from OWLSA, the Branchez edit to “How High You Are.” One of the first fully packed stages to take over Electric Forest, What So Not drew in one of the biggest crowds of Thursday leading into Duke Dumont’s set. With so many people attending his performance, What So Not took the opportunity to premier some new unreleased music during his set as well.

One of the must see sets of Thursday was the night performance by the man behind the This Never Happened project, Lane 8. He has always kept it simple and let the music do the talking for him, making Lane 8 one of the greatest quality original producers in the game right now. In the last half of the Anjunadeep takeover he played on the illuminated stage with a harder techno twist. A grim surprise, Lane 8 was dropping tech house tracks like Fancy Inc and Sonic Future’s “Hazy Verses” to help cultivate his murky nighttime forest set. The self-released latest track, “Fingerprint” made an appearance to follow the dark set trend.

Following along with the rest of the Anjunadeep team Lane 8 used some foreign influence in his set. He played the new African-inspired track from Andre Hommen’s “Bassari People” to add some exotic spice into his deep house techno set. As the night grew later Dusky and Bonobo filled the Tripolee stage with deeper tunes and buried everyone further into the rabbit hole on night one of Electric Forest. The entire campgrounds had the lovely sounds of Anjunadeep’s best orchestrating their late night bustling.

Walking through the campgrounds on morning two of Electric Forest 2016, everyone was now fully entrenched with their unique bastions. Tent towns were built out of different shapes and material, each baring some sort of individuality. The extravagant tapestries, totems, flags, and signs also served as specific counter-points for later meet ups with the crew and new friends alike. Virtually all the attendees had arrived at this point of the festival and everyone was ready to tackle their first full day in the Electric Forest. Fans piled in early with the intention of staying till the very end of the night with the music scheduled to stop at 3:00am. With a stellar first night in the books, Friday had just as much to offer.

Alina Baraz, one of our Top 5 Undercard Acts of Electric Forest, put on a dazzling show at the summit stage of Jubilee. At the very top part of the festival there is a monster structure of a carnival tent that provided adequate funk, jazz, bass, and everything in between, all weekend. Alina Baraz layed down a memorable performance that had the crowd swaying together singing to classics like “Can I” and “Fantasy.” The crowd packed in to fill the entire draped tent stage. Behind her was a live soulful ensemble which matched her serenading vocals. The dimly lit tent stage was both intimate by design and nature with the sedated crowd rocking along.

Across the way was the mighty Sherwood Court, the third and final mainstage of Electric Forest. Keys n Krates were set to take the throne for an hour plus set on Friday. As the last of the day’s light faded their opener of “Midnite Mass” slowly chimed in before quickly leading up to the drop in the smash hit “U Already Know.” The combination of those two tracks live, on that type of scale at Electric Forest, is an introduction that stayed with you throughout the entirety of the weekend.

The trio almost looked belittled in the massive backdrop as they jammed out on their stations. The lighting glared and blinded as they played an exquisitely scratched up version of Lil Scrappy’s “Don’t Stop” and various other hip-hop tracks by the likes of Drake and Lil Sean. A sweet treat for the crowd was the live version of the Tove Lo flip to “Habits” and “Treat Me Right” both offering playful and emotional soundtracks to enjoy in the dominating Sherwood Court.

The build up to “Dum Dee Dum” was drawn out to a level of grave longing, but when the drop came the whole crowd literally dipped a foot lower to the ground shaking it to “twerking it on the dance floor.” Their live performances themselves are a special sort of experience, but with the massive sound system and grim elephant atop the side towering tapestries of Sherwood Court it was out of this world. Many followers had seen them play at this year’s Midnite Mass Tour, however there was not the slightest chance for any type of comparison to be made between their tour and this monstrosity of a live set at Electric Forest 2016.

The night ended on a bass fueled rampage at the Tripolee stage. The much-hyped Caspa b2b Rusko were set to kick off in the Electric Forest at 11:00pm. They’ve been laying down filthy British bass across the country this year as part of their 2016 tour. Their newly released single via Annie Mac’s BBC Radio 1, “Cheese” made for a new drum n bass crowd pleaser. The crunchy UK Bass fit ever so perfectly in the dark night of Electric Forest.

To close out the night Adventure Club would be performing until 3:15am at the last stage of the festival when exiting, Tripolee. Everyone leaving caught a glimpse of the set live, and the roaring stage could be heard well into the campgrounds. With the mind-bending drop of “Game Over” by Lookas & Crankdat popping their set off early, the lower part of Electric Forest was tuned in for Adventure Club’s boisterous mix. The closing set was much heavier and grimier than you’d expect from a “typical” Adventure Club performance, in every way you could want possible. To close off the night they played their 2011 classic “Crave You” remix, a flashback tied to memories of years past.