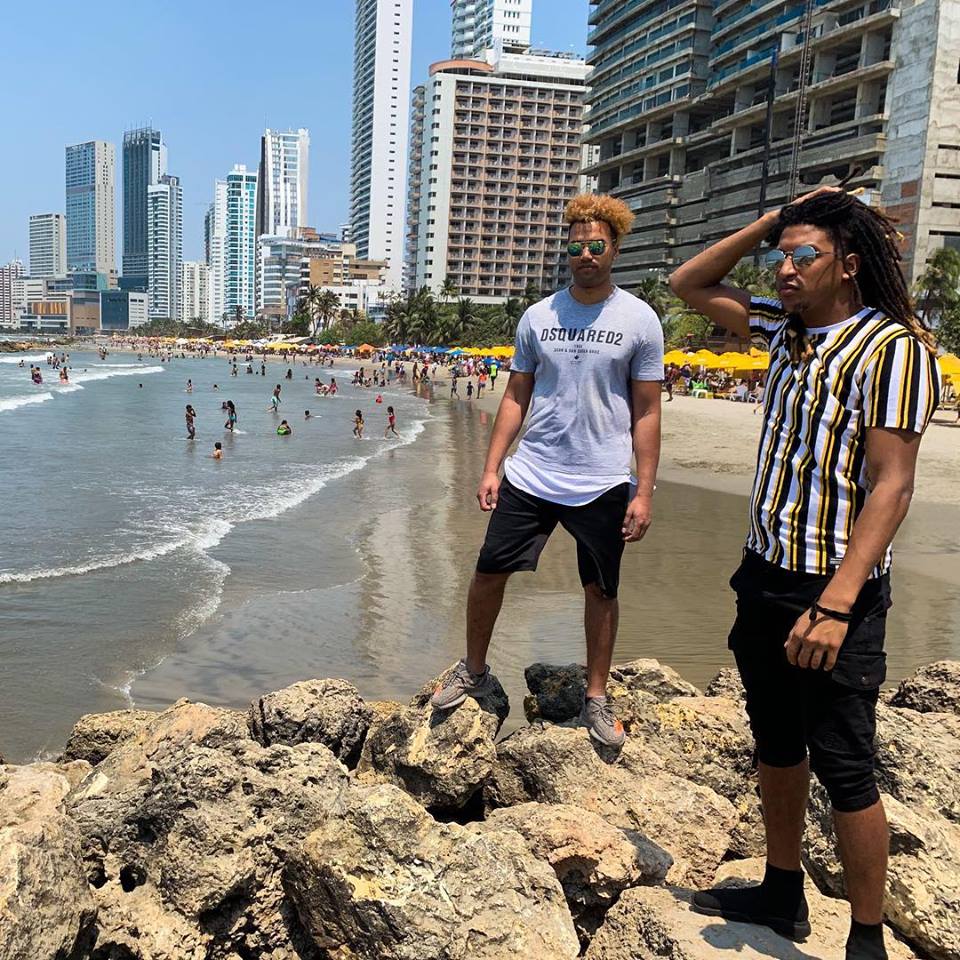 Giordano Ashruf & Rashid Badloe better known as the “AfroBros” are a Netherlands-based, Latin Grammy-nominated duo in the dance music sphere. Signed to one of the largest dance music labels in the world, Spinnin’ Records, the pairing is an ideal fit as Spinnin’ also calls The Netherlands home base.

Packing 10 years of experience producing music, Giordano and Rashid began as DJs and created a new wave and genre, culminating the sound they embody in their work today. Their 2016 track “18 plus” was a turning point for the bros, and although it began as a joke with a catchy melody, it turned into a huge international hit. This proved a solid example of the guys’ lighthearted and fun-loving characteristics, which are super prevalent right off the bat when speaking with them. Talk about a pair of talented musicians who immerse themselves in all that life has to offer, enjoying each and every day here – these two don’t hold back and thrive from sharing their happiness through music with the world.

Some of their most groundbreaking attention has stemmed from co-producing Major Lazer’s “Sua Cara,” which went on to earn a Latin Grammy nomination, as well as for “X (EQUIS)” which was produced with Jeon, Nicky Jam and J Balvin, which also collected a Latin Grammy nomination. “X (EQUIS)” also holds over 700 million Spotify streams as well as the record for one of the fastest tracks to reach 1 billion YouTube views.

Their latest single “Pas Je Op” beside Finest Sno, Scarface, and Young Kenna is just one of the many tracks about to surface from Afro Bros. As discussed below, they’re preparing an arsenal of new tunes with some major names in the industry, just waiting for the right time to unleash them upon us. 2019 is set to mark a year of revival for Afro Bros as they prep for international touring and new tracks to bring their signature “Booty Beats” to a dance floor or festival near you.

Read below for our full Q&A with the guys where we discuss their latest ventures, collaborations in the works, upcoming tour stops, traveling in Colombia & more!

Nocturnal Times: Welcome to Miami for another Music Week! Tell us about your plans for the week?

Afro Bros: Just chilling, networking, work in the studio with a lot of artists, so yeah we are busy these days!

Nocturnal Times: Where have you guys been touring recently? What shows do you have coming soon?

Afro Bros: We just came from Colombia from a two-week tour. We went to Medellin, Bogota, Cartagena and Cali – the four biggest cities, and it was amazing! We did four concerts and it was crazy.

Nocturnal Times: Do you have a favorite place that you like to visit?

Afro Bros: I think it’s Bogota now! (laughs). We play everywhere in the world so every concert has its things. But yeah we love to be everywhere!

Nocturnal Times: Is there a place that you haven’t been yet that you’d really like to get on the list?

Afro Bros: Yeah, loads! I think Coachella. I want to play there so badly. We haven’t been – we should go. Or Ultra!

Nocturnal Times: So you guys came out of the club scene and decided that DJing was a path to pursue. How did that progression happen or how did you decide to take that next step?

Afro Bros: It just happened! We just rolled into it. We saw big stars in the club and we were like we could do that too. Nothing was forced. It was all fun! It became a job and now it is still fun. Our music is well known now so it’s good.

Nocturnal Times: Do you have a song that time after time remains a favorite of yours to play in your sets? Crowds often have favorites to hear, so wondering if on the other end it is the same?

Afro Bros: We have some but we like all of them, otherwise we wouldn’t have made them!

Nocturnal Times: How has your journey been so far with Spinnin’? How has being from the Netherlands where dance music is so prevalent helped you along?

Afro Bros: It is difficult to achieve a place because everyone is doing it and you have to be good to get signed there. In the first place, it is amazing to be signed by Spinnin’ Records – it is a great achievement. So from there, we just explode! It’s always amazing to work with Spinnin’ Records because they are known very well for big artists like Martin Garrix and Hardwell – big names. Very creative and we’ll see what happens!

Nocturnal Times: What can you share with us about music you’ve been working on, whether recent or upcoming?

Afro Bros: We have a lot with Dimitri Vegas & Like Mike – three collabs. One is with Akon, the other one is with Sebastián Yatra, and the other one is probably also with Camila Cabello. Probably Daddy Yankee, and we have loads of other singles. We recently worked with David Guetta as well, so hopefully that will come out soon. We have a lot of names! Oh and DJ Snake! That’s our boy. We have known him since the beginning. Eight years ago we were in Miami and he was nothing, we were nothing, and we teamed up and went to every pool party. He’s still our friend and now we are building tracks together.

Nocturnal Times: Can you think of one or two artists that you’d like to work with someday that would be a dream collaboration?

Afro Bros: Of course. We would like to work with somebody like Rihanna or Justin Bieber. To combine forces and see what happens!

Nocturnal Times: To wrap up, what do you have planned for the remainder of the year?

Afro Bros: A lot! I can say that Ibiza is coming again, we play there every Summer. Ushuaïa, Tomorrowland. I think we play every week at Ushuaïa. There are a lot of festivals. Europe, and maybe South America too. And hopefully in the States too! We’re working hard together 🙂