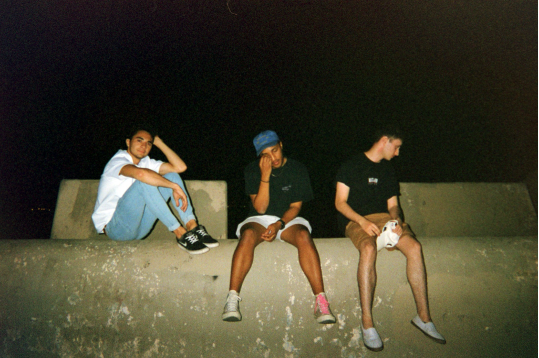 The trio 2 Man Embassy comprised of Blake Martin, Tristin Sullivan, and Bradley Smith have joined forces with Sophia Gripari to bring new tune “Out of Luck” out now on Lowly. This is the second release off their upcoming EP which is on the way later this summer.

Inspired by all of the romantic comedies they watched growing up, the artists realized that love is never exactly how you see it in the movies. “Out of Luck” goes off the idea that love has a mind of its own, and despite how it is portrayed on the big screen, it is important to accept the reality of it.

“We did this song with Sophia Gripari, a singer/songwriter from London, currently living in Los Angeles. We loved the song beforehand, but Sophia’s lyrics and vocal performance really added everything it was missing, and brought it to the next level.”  -2 Man Embassy

Combined with the narrative of Gripari’s personal experience with love, there is a playful essence in the track since some of these iconic romantic comedy films are highlighted throughout. The clever lyrics will blast listeners back into the early 2000s, but the production will remind you that this is very much a modern day hit. Regardless of where inspiration comes from, 2 Man Embassy have always been authentic and creative when it comes to creating a new release.