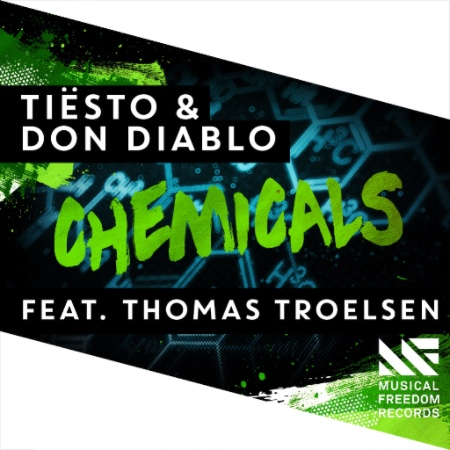 Tiësto and Don Diablo have joined forces for one of 2015s biggest collaborations. “Chemicals,” which features vocals by Thomas Troelsen, is out now on Musical Freedom Records.

The big-room production made its debut by Tiësto and Don Diablo at the main stage of Tomorrowland in Belgium this past July.

Check this space for the official music video, which will make its premiere in the coming weeks. The official video, which encompasses CGI and special appearances from the duo, is based on a story of three fans from different parts of the world.

“Chemicals” is available on Beatport.

Grammy Award-winning DJ/producer and Club Life curator Tiësto is one of Las Vegas’ most prominent residents. Hakkasan Nightclub and Wet Republic Ultra Pool at MGM Grand Las Vegas are home to the Dutch DJ with gigs scheduled throughout the remainder of the year and counting.

Tiësto announced that he’s bringing in 2016 at Hakkasan Las Vegas on December 31.

Breakout DJ/producer Don Diablo has created remixes for Madonna and Ed Sheeran, along with Beatport hits “AnyTime,” “Starlight,” and “On My Mind.” Like Tiësto, Don Diablo is also a resident at Hakkasan Nightclub at MGM Grand Las Vegas.