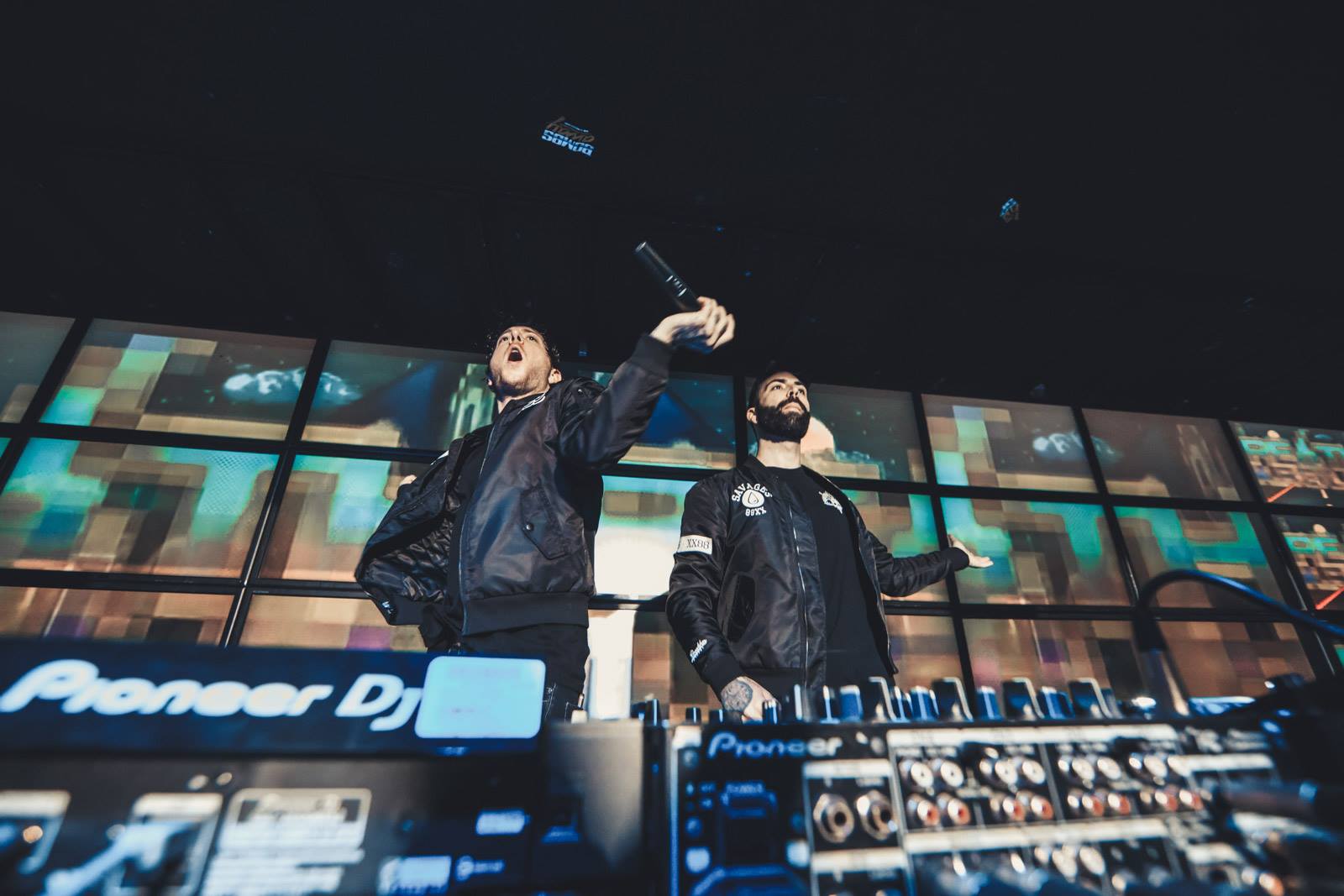 Colorado-based electronic band Breathe Carolina payed a visit to Miami during this year’s Music Week. David Schmitt and Tommy Cooperman of the group greeted the Spinnin’ Hotel with welcome arms. The band has progressed from their pop punk roots into the electronic music scene, continuing to grow and develop themselves as artists.

The Nautilus Hotel in South Beach hosted this year’s Spinnin’ Hotel. After huge success with Spinnin’ Records’ first edition of the hotel, they returned to Miami Music Week for a second year. Running from Wednesday, March 22 – Sunday, March 26, the Spinnin’ Hotel hosted a gathering of artists and fans each day. Celebrating with Spinnin’ Sessions, DOORN Records, the Heartfeldt Pool Party, Spinnin’ Premium and Spinnin’ Deep, it was a week packed with music, fun, and madness.

David and Tommy took some time out of their day at Spinnin’ Sessions on Wednesday to sit down with The Nocturnal Times and discuss a bit about what they have been up to lately, their upcoming week, and the foreseeable future of their group.

The Nocturnal Times: We are here at The Spinnin’ Hotel during Miami Music Week– how are you guys feeling today?

Breathe Carolina: (Tommy) Really good. David was a little sick yesterday but recovered a bit – at a 90% but not 100%. I’m surprised because we played till five in the morning last night. I woke up at nine this morning and tried to get Snapchat spectacles but it didn’t work so I sent our liaison to get them for me, which was great.

The Nocturnal Times: You’ve played Ultra in the past, and have a lot of shows lined up this week – tell us a little about what you’ve got going on.

Breathe Carolina: (Tommy) Music, shows. We are playing about seven shows this week – way too many! We have to go to Detroit tomorrow, and then fly right back. We go straight from the show to the plane, fly right back here then play three shows on Friday. It’s very hectic, but we wanted to be as busy as possible because otherwise you’re kind of just standing around. (David) It’s a week of Miami and it’s kind of crazy so you need to have stuff to do otherwise you’re kind of hanging around.

The Nocturnal Times: I remember seeing you play Warped tour back when I was in high school. What made you want to make the progression into electronic music?

Breathe Carolina: (David) After a while, when you do the same thing for so long you just want to see what else is out there. It was kind of natural to be honest with you, to start making music like that. We naturally just got more into this scene, but realized that we couldn’t double dip. We can’t do this and then go back on Warped Tour because people aren’t going to take us seriously. We had to stay away from all of that, which was weird because that’s what we started with and how we grew up, but everything is great now.

The Nocturnal Times: Do you miss that scene or are happy where you are?

Breathe Carolina: (David) We’re really happy where we are. Those times were great and fun but also these are very awesome, and it’s just new. There is a new passion that we have so it’s pretty cool and feels new again.

The Nocturnal Times: What would you say is different about Ultra as compared to some of the other festivals you’ve played?

Breathe Carolina: (Tommy) It is really based on the day. Most festivals are based on the night, but it’s a festival that starts at 12 in the afternoon. It is really a beach Miami vibe, where other festivals are open but more focused on later. EDC doesn’t open until 6 pm, Ultra opens at 12 and is very daytime, fun, laidback, chill. Not to mention they base a whole week of stuff around the festival and it starts the entire year. Everybody starts playing new sets right now, everybody tests all the stuff they are going to do for the rest of the year. Starting this week is pretty much the EDM New Year.

The Nocturnal Times: After touring in various cities and countries, do you have any picked out as favorites to play?

Breathe Carolina: (David) We just broke into Asia this year. The first time we went to Asia was September, and we had never gone in the past, and we are doing so much over there so I think that is my new favorite spot right now. Everyone is super nice, it’s just cool to experience those cities because it’s a whole different culture. (Tommy) Yeah it’s really amazing, I like Asia a lot. We did Budapest, we just walked around to go get food and all of the sudden 5 hours later we are climbing a castle. It was the most beautiful place. We expected it to be like a farm – we didn’t know. And then we landed and it was just the most beautiful place in the world, and it caught me so off guard. It’s my favorite place I’ve ever been to.

The Nocturnal Times: Do you find a lot of places you travel surprising like that?

Breathe Carolina: (David) It’s honestly surprising if we want to go explore. We have been traveling for so long that when we get somewhere, it’s always the same sh*t. We get to the hotel, we go play, we leave. Everything starts to blend together. Everything is the same. In the US especially, we have been everywhere like 30 times. (Tommy) The US people and shows are great, but the US as a country and things to see, not so much. There’s New York, Texas, and California. What is there in the middle of the country? What are you going to see? The shows and people obviously are amazing but as far as stuff to see, there’s not much. (David) There’s just not a huge want. I’d rather lay in a bed all day than walk around. (Tommy) When you fly 14 hours or something, and you have to work too. Today we were working on finishing our set, and music, and our radio show right until the second that we got here. We are always doing so many things.

The Nocturnal Times: But you enjoy the life right? Other people wonder what it’s like to constantly be hopping around. Practical things like – when do you sleep?!

Breathe Carolina: (Tommy) We were with Blasterjaxx the other day, and we were like with the flight and this and that, we were all just looking at each other like, “Oh this could be so much worse.” We can’t complain about this sh*t. Can’t complain about the fact that we have to be on a plane. (David) It’s one of those things where you sleep whenever you have time to. Yesterday we landed, I slept for an hour, then we played till 5 in the morning last night, slept a couple hours, so it’s always a random couple hours here and there, and you just try to make the best of it. (Tommy) But we could sleep for like 9 hours a night and work at a Papa John’s, but we don’t, so we cannot complain about what we do.

The Nocturnal Times: Can you name any artists or styles of music that you’ve tried to incorporate sounds from into your music today?

Breathe Carolina: (Tommy) Recently he (David) has been on a Weeknd, Post Malone vibe. Not so much the artists but the producers – beat wise. So we have been trying to incorporate that which is different for us because usually we make club bangers and stuff. We grew up on pop punk. Listening to Daft Punk, MSTRKRFT, Justice, Tiesto. We try to not make anything that is your average stuff. We try not to make anything. One day he will send me a whole finished song, and we won’t even use it. (David) I had a tropical house phase for two months. (Tommy) He was like, I know we can’t use any of this but I just want to get good at making it. We’re songwriters and producers first, so for us we always want to learn how to make new stuff even if we aren’t going to use it. We always want to be writing different stuff so our brains keep growing. We need to keep growing as artists and producers and writers.

The Nocturnal Times: I remember back when I first heard of you, you always had a different sound. You were playing Warped Tour but you still always had that electronic undertone in your work.

Breathe Carolina: (Tommy) If you listen to any of our albums fully through, one song will be like Metallica, the next song will sound like Justice. We have always prided ourselves on not being placed as a certain kind of artist. We want to make whatever we feel like making.

The Nocturnal Times: What do you predict for Breathe Carolina in the next few years? Where do you see the future?

Breathe Carolina: (Tommy) I mean jet-packs are going to be a big part of our lives (laughs.) I think we are always going to be growing and exploring. I don’t know what is going to happen in two years. I didn’t know this was going to happen two years ago. It’s hard with us because we’re the kind of guys who are never satisfied. We’ll set a goal, and reach it, and be like this goal sucked. People will say, “You had a two year goal and you reached it in six months,” and we will say it’s not enough! We’re always trying to grow past where we’re at. Tomorrow we may say we need to play on the moon, and that’s the goal. We’re getting to a point now where we are starting to focus on songs, not just club bangers – but also club bangers at the same time. Just trying to grow and see what happens!