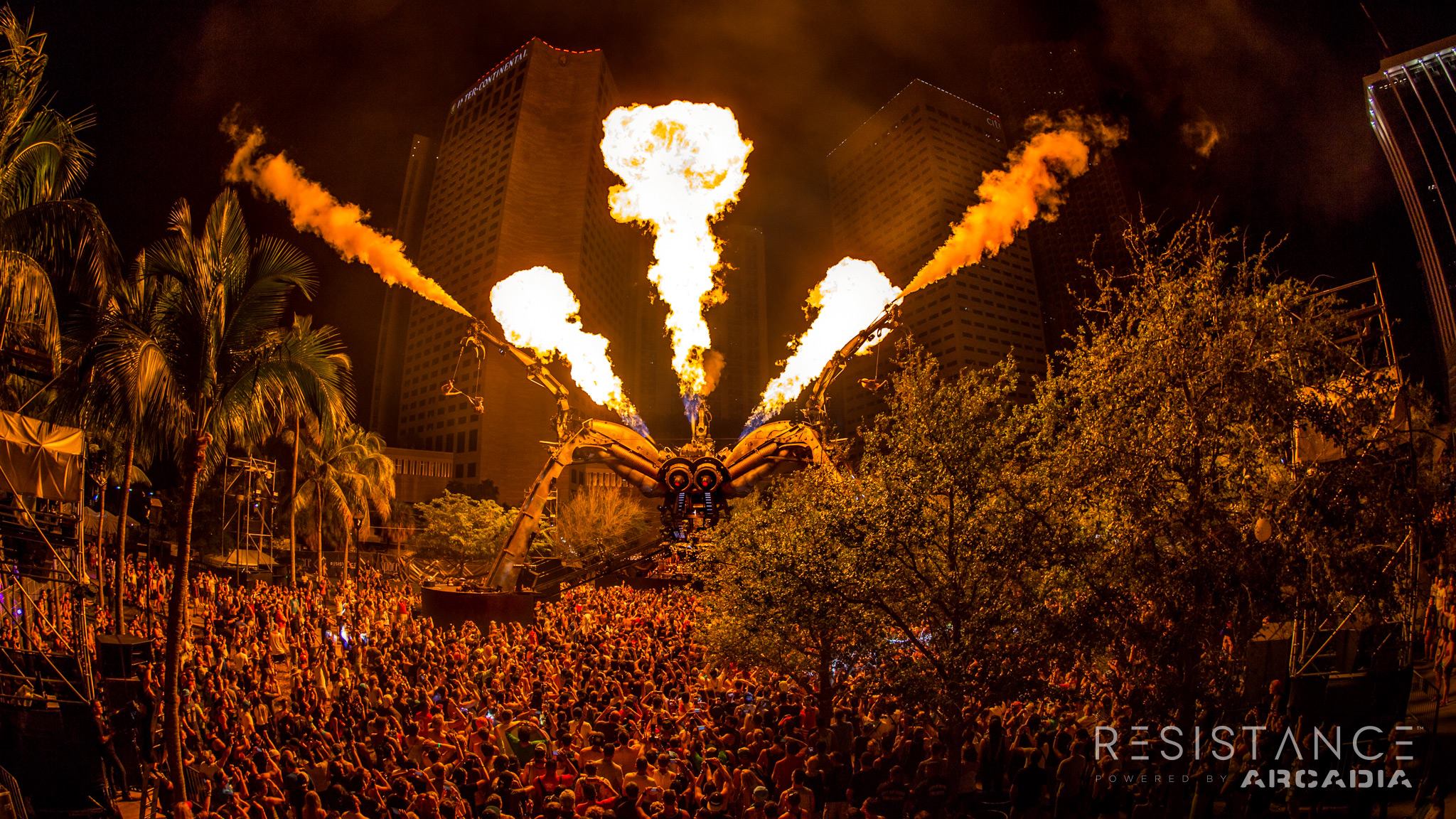 The Resistance brand from Ultra has only been in existence for two years now. However, the organic growth and expansion that’s risen from the powerhouse name would make any Forbes 400 jealous, as it’s slowly starting to create a whole new identity itself. The first time “Resistance” rolled out was not actually at the center point of Ultra Miami, but instead first saw action in the 2015 celebration of Ultra Buenos Aires. Ultra Worldwide took a chance and once again pushed the traditional thinking of festival production. They wanted to create a niche for all the diehard underground dance fans looking to take a break from the headliners of EDM.

Arcadia Spectacular has been the driving force behind the newest Ultra stable, fabricating the original Afterburner stage of 2015, shown at both Argentina and Miami. In 2016 Ultra and Arcadia raised the bar once more with an entirely new stage for Resistance and easily one of the most detectable stages in the entire world, the towering Spider. Whether you’re not even a dance music fan, a fiend for the mesmerizing looping vids of festival action, or a world renown artist; you have heard and been mind-blown by this iconic structure. Matched with pyrotechnics and a bird’s eye view like no other, Resistance gained all the well-deserved hype with this behemoth architectural piece of work.

Year three is now upon the budding Resistance brand, and obviously Ultra and Arcadia had some special plans for the 2017 Ultra Miami stop. With all the success surrounding Resistance, they devoted TWO stages to the house and tech filled party. The Spider stage came back for three days, and king of the rave Carl Cox led two full days of Resistance action in the Megastructure along with a freshly announced Global Ambassador agreement between the two.

Another first for the Resistance brand was the special combined set from underground kings Sasha and John Digweed, the first time the duo performed together in the US since the 2010 Ultra Miami performance seven years ago. They closed out the Megastrucutre on Saturday to finish the Resistance takeover for the weekend, leaving Sunday to be all hands on deck at the Spider stage. For those that couldn’t make it down to Miami this year, BE-AT.TV made you feel right at home as they took over the Spider stage giving audiences everywhere live video broadcasts of the trendy Resistance action. Offering memorizing sequences of pyrotechnics, eerie nighttime shots of the legged creature, and an up close and personal look at artists such as Hot Since 82, Jamie Jones b2b Seth Troxler, and Nicole Moudaber live from the cockpit, it was the next best thing to being there in the flesh.

Just recently Resistance announced it will be taking up residency in the summertime oasis of Ibiza at Privilege, headlined by no other than Sash and John Digweed themselves. With year 20 for Ultra Miami already in the works, you can count on Resistance being a key point in the larger-than-life upcoming landmark celebration.