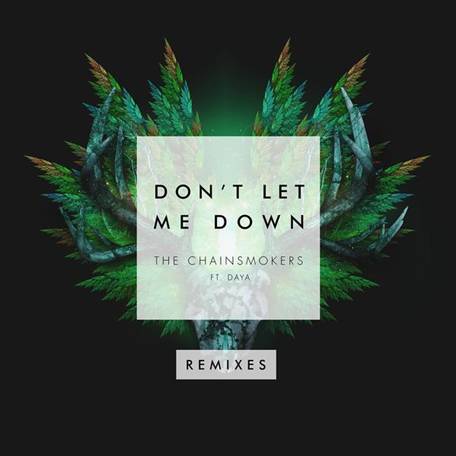 The Chainsmokers have released an official remix package for their current single, “Don’t Let Me Down” feat. Daya

In time for their Coachella 2016 debut performance at the Sahara Stage this weekend, The Chainsmokers have unveiled the highly anticipated remix pack for their latest single, “Don’t Let Me Down.” Featuring vocals from Daya, “Don’t Let Me Down” is an electronic dance music (EDM) vocal anthem, which now sees official remix releases from W&W, Zomboy, Ephwurd, and Ricky Remedy. Listen to the newly revealed remixes below:

Check this space for the official music video for “Don’t Let Me Down” feat. Daya, which is slated to premiere later this month. With Platinum certification in Norway and Gold in Australia, New Zealand, and Ireland, “Don’t Let Me Down” is already a surefire contender for track of the year. The track as of late has placed at #6 on the Global Dance Shazam chart, #14 on the worldwide Shazam chart, and #11 on the Global Spotify chart.

With festival season upon us, there’s no denying that the internationally acclaimed production, from the famed duo, The Chainsmokers, will make waves throughout the remainder of the year. Last month, Alex and Drew took to Miami’s Ultra Music Festival for a headlining slot at the Ultra Worldwide stage.

Familiar to many for a plethora of tunes, The Chainsmokers have built an extensive discography over the course of their career, which includes: “Roses” feat. Rozes; “#SELFIE;” “Split (Only U)” with Tiesto; “New York City” feat. Victoria Zaro; “Until You Were Gone” with Tritonal feat. Emily Warren; “Let You Go” feat. Great Good Fine Ok; and their newest, “Inside Out” feat. Charlee, among others.

Purchase “Don’t Let Me Down” Remixes feat. Daya on iTunes.