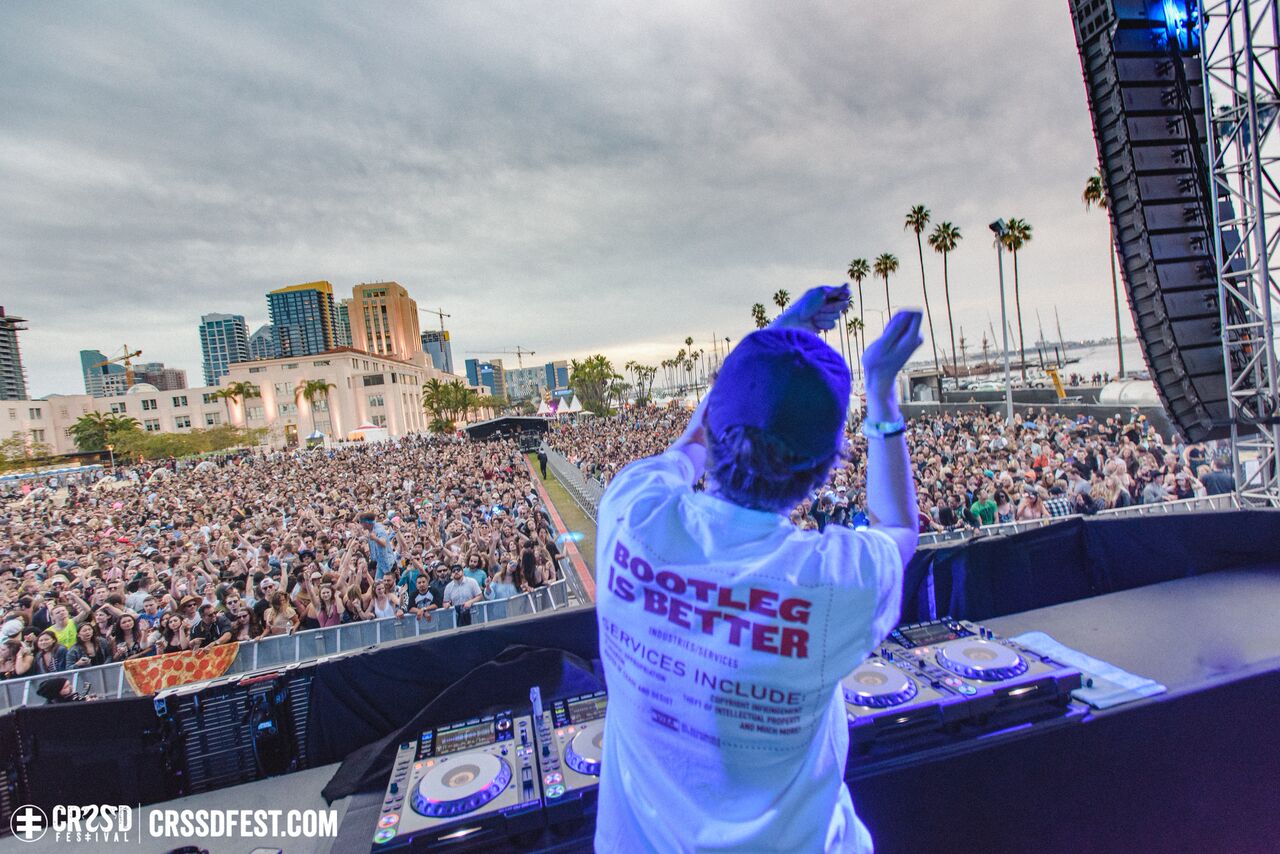 CRSSD Festival took over the whole weekend and brought together a community of dance music loving spirits. Before the gates were even open at the Waterfront Park on Saturday, CRSSD had already sorted out participants for some pre-party fun. On Friday the official CRSSD weekend started with a night curated by the smooth sounds of Lane 8 and Luttrell at the Music Box. The two kicked off the weekend in a real proper way as the dance floor was packed and everyone was moving. The three story venue had the ability to make you feel both intimate with fellow attendees, but grandiose when observing from the side decks.

Day one of CRSSD Festival you had the local boy Rad Cat opening up the main stage at Ocean View. The young future bass aficionado is climbing the ranks and you’ve probably heard his hit track “everything u wanted,” in a set or two. Other notable future bass acts included sets from Point Point, Jerry Folk, and Giraffage. Mija’s set was one of the most enjoyable of the day as she took you all over the place in terms of musical direction. The crowd was moving to her spinning Chris Lake’s “Operator” and throwing in some drum n bass to get the feet moving quickly. Mija then settled it back down with the new Josh Pan track “Nowhere,” creating quite the vibe in the green Palms stage against the dark San Diego backdrop.

On the more melodic and deeper side two acts familiar with the Anjuna labels, Lane 8 and Yotto, were handing out feel good performances and the Anjunafam were repping all throughout the audience. Saturday was closing strong with more sets from headline names like the Grammy nominated collab of Bob Moses, Dirtybird favorite Justin Martin, and the ever so classy Duke Dumont. Duke’s set also contained a wide variety of musical genres. He played material ranging all the way from Prydz to Wiwek, as an indication of how varied his hour long mix was.

Post 11:00pm, CRSSD had finished, but it was round one for the numerous after party events. 2ManyDJs and Virgin Tears held down Bang Bang, Bob Moses and HVOB returned to Music Box, and Amtrac was at El Camino. One of the few true afterhours clubs of San Diego, Spin was churning till 4:00am by the talents of Damian Lazarus, Recondite Live, and Lee K. The off-the-beaten-path club was filled well past last call at 2:00am, as the music and environment was just too hard to leave. If you needed a break from all the chemistry around you, you could go to the top roof deck for some fresh air, playing the same set from inside via surround speakers. Spin also had a whole other DJ room in the middle floor, making it possible to spend your time in different settings if you choose to.

Even though Sunday’s weather had a rough start, the lineup brightened everyone’s mood for day two of CRSSD. A problem you love to hate, scheduling conflicts from too many set-worthy artists was a common theme on Sunday. Early on you had to choose between mixes from Kasbo and Chris Lake, and had to literally pull yourself from the main stage at The Ocean View as the lineup at the far stage was completely stacked. Dusky performed their live debut, part of the first run in United States doing so, to start the day off of the multiple must-see artist at Ocean View. Right after Dusky was fellow British mates Snakehips, laying down a little bit of a different set than it’s predecessor. The bassheads and trap fiends gathered for this one as Snakehips laid down their sexy hip-hop infused beats. The mood was right when they threw in classics such as Snoop Dogg’s “Drop It Like It’s Hot.”

The stable of CRSSD festival House + Techno (as donned on their trendy streetwear), was getting the spotlight on Sunday. Artists such as the funky and feel good Hose Meat Disco and CRSSD favorites Seth Troxler b2b Eats Everything took the majority of the mid-day attention. Heidi laid down an extremely up-beat house party-esque performance. The producer was seen on the stage smiling and moving to the beat, making it contagious for everyone in the crowd to enjoy themselves just as much. Mr. Dirtybird himself, Claude VonStroke, was dubbed with the closing honors as he was allotted to play one of the few hour and half sets at the festival. He was gathering quite the crowd early on and ended the festival at The Palms stage on a grooving note.

Perhaps the most surprising set of the weekend, the duo of Marian Hill, consisted of a three-person live set and was an actual performance to say the least. Singer Sam Gongol’s voice was pure and smooth as she sang live and belted out tracks such as Whitney Houston’s “I Just Wanna Dance With Somebody” and their hit track “Down.” Accompanying Sam on the mic was the other half of Marian Hill, Jeremy Lloyd holding down the decks and a live piano. There was also cameo additions of a live bass guitar and saxophone. All these combined live added a real element to make the Marian Hill set one to remember.

The man who has taken dance music by storm yet continues to be low-key and humble, Flume, was set to close out the main stage of CRSSD weekend. Anticipation for this set was high, and continued to build as a custom stage production just for him was being built minutes up to the 90 minute set. Flume appeared behind a smokey silhouette to greet the fans of San Diego. The Australian shares the same climate background as the majority of the SoCal crowd and jokingly said, “It’s cold out here San Diego,” amidst the cooling nighttime breeze. The crowd was packed and he brought listeners up and down, quickly warming everyone.

The production and music toyed with attendees as a melting demonic figure crumbled and rose again to “Wall Fuck,” melting your mind in the process as well. One of Flume’s earliest take-off hits, the remix to Disclosure’s “You & Me” made an appearance and created a feels inducing moment. To balance the softness from “You & Me” he smacked everyone with RL Grime’s “Core” leaving the crowd in utter and complete chaos from the drop. Fans left the stage nearly on empty after such an explosive performance from Flume.

CRSSD Spring weekend 2017 went off without a hitch and had all materials to make lasting memories for everyone who attended, and instill FOMO in those who haven’t been yet. Trendy merchandise gear, quality artists from multiple genres, creative stages, and an open layout all attributed to a stellar CRSSD celebration. It’s no surprise the festival has blown up since its inception, and will continue to do so.