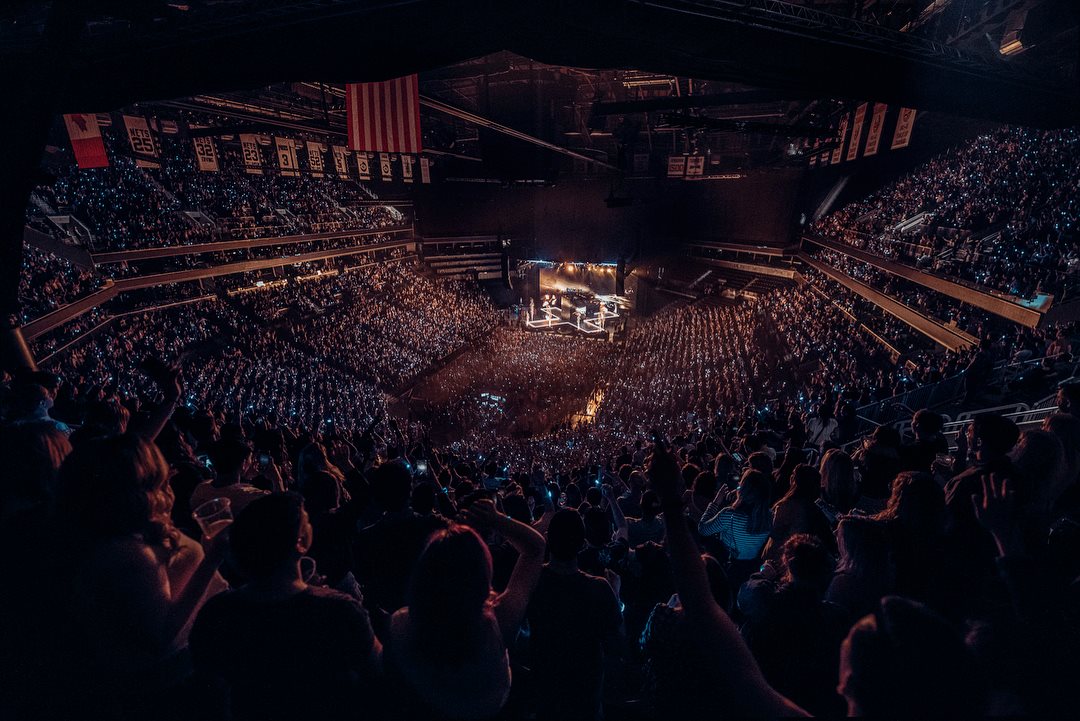 The 26-year-old tropical house talent took the stage around 9:15 p.m., beginning the show with the first track from his recent Kids In Love album, “Never Let You Go” feat. John Newman. “Stay” feat. Maty Noyes, taken from Kygo’s Cloud Nine album, was the second song in the show’s setlist, followed by “Sunrise” featuring a live rendition from vocalist Jason Walker. The crowd was in uproar as Kyrre introduced his latest single, “Remind Me To Forget,” which features sensual vocals from Miguel.

Kygo stood stories above the sold-out crowd, atop a pillared column at the center of a crossed miniature catwalk end stage. The Brooklyn stop was fully equipped with beaming-high pyrotechnics from all ends of the stage, fireworks & sparklers, confetti showers, and complimentary light-up bracelets which displayed ‘Kids In Love Tour.’ The live performances throughout the set served up evening highlights.

Taking a break from new album tunes, Kygo continued with two of his well-known, career-catapulting remixes, “Younger” by Seinabo Sey, Syn Cole’s “Miami 82,” and “I See Fire” by Ed Sheeran. Proceeding with another live performance, Justin Jesso joined Kygo on stage for a live rendition of their recent smash, “Stargazing,” which is included on his EP of the same name. Jesso’s powerful live performance kept the audience on their feet, with their hands-in-the-air, as they sang along to his impressive vocals.

Continuing the Kids In Love tour with “First Time” feat. Ellie Goulding, “Carry Me” feat. Julia Michaels, and “Raging” feat. Kodaline, Kygo spent the set conducting the arena from atop his very own throne. The tastemaker turned back time with the song that started it all, his take on Marvin Gaye “Sexual Healing.” Bonnie McKee took the stage to perform “Riding Shotgun,” and returned later during the ensemble to perform a revamped, intensified version of “This Town.” His signature “Starboy” remix from The Weeknd & Daft Punk – which was one of the only officially released remixes for the Top 40 smash hit – had Brooklyn singing and swaying along.

The goosebumps filled the 19,000-capacity Barclays Center during one of Kids In Love’s most emotional tracks, “Permanent.” Powerhouse J.Hart joined Kygo on stage for a flawless interpretation of “Permanent,” which was undoubtedly a KIL tour highlight. Kyrre spoke about being inspired by OneRepublic, then later releasing a song with them, “Stranger Things.” Brooklyn-native, Parson James, exploded onto the stage to perform alongside Kygo for their monstrous “Stole The Show.” Packing tons of energy and an unparalleled vocal performance, Parson James interacted with the crowd, even initiating an upbeat “Stole The Show” chant.

Wrapping things up with a stripped down instrumental performance of his spine-tingling “Midnight” remix for Coldplay, Kygo took to the piano beside violinists, to really tug at the heart strings. Just when you’ve almost forgotten about “It Ain’t Me,” you’re undeniably reminded when 19,000 screaming fans roar with excitement. Last year’s radio-smash, “It Ain’t Me,” which features vocals from Instagram’s most-followed, Selena Gomez, and was just performed with Rita Ora at the main stage of Coachella, had Brooklyn screaming the words from the top of their lungs.

Encoring with the tour’s title track, “Kids In Love,” the near-two-hours of bliss came to a close on a high note. The palm tree gang sang along to a stripped-down, acoustic closing performance of “Firestone” with Conrad Sewell.

All of these likeminded attendees were all there to see one person – Kygo. Everybody came together to celebrate the career of a multi-talented producer, DJ, and musician, who’s already taking over the world, but shows no signs of slowing down anytime soon.