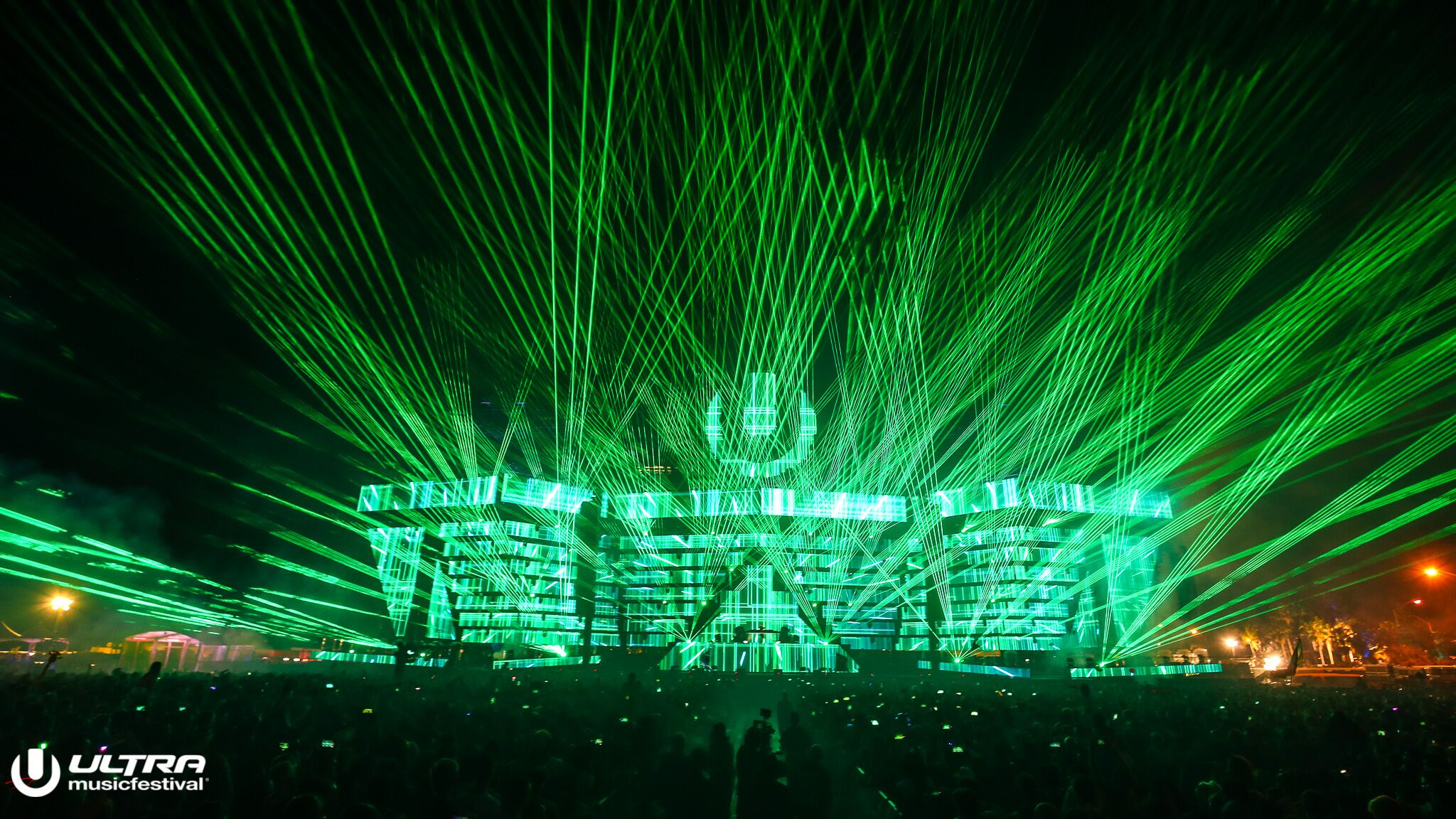 As the Ultra Miami dust settles, we’ve recapped a few special sets that we still can’t keep out of our memories despite the fact that things are over. The replay runs hard and fast, so we’ve included these for you below in case you weren’t with us in Miami, or in case you were running around at someone else’s performance during these unforgettable few. We’ve also included some full sets so you can read & jam along as your day goes on – enjoy!

THEY THREW THE MIXER. Definitely the highlight, but we will back it up a bit. The kickoff of their Saturday evening Mainstage set had a slow but mighty start, with some tech issues for the first 10 or so minutes. A trio of charismatic and fun-loving characters, Cash Cash of course did not let this put a damper on their Ultra 2019 showdown. Talking and laughing with the crowd as this goes on, the guys ultimately got their set running full swing (after willfully smashing their broken mixer on the ground in front of the crowd – a very adrenalizing few moments to remember.) Continuing to unleash the good vibes with anthemic Cash Cash jams like “Take Me Home,” “Surrender,” “Belong,” “Lightning,” “All My Love” & more, the performance held that signature feel-good love we keep crawling back for. Our personal favorite is their unearthly collab beside fellow anthem-creating titans Tritonal, “Untouchable.” This is one of those songs where when you hear it blaring above that crowd of thousands, you can’t help but grab the person next to you and throw your hands up in joy. A set with some hard ups and downs, the guys carried themselves beyond well through their technical difficulties in the beginning, and saw an incredible turnout to finish it off.

WOW. Nick Miller’s Ultra Miami debut was a grand slam way out of the park walls, to say the least. His Live Arena takeover on Saturday night had the tent-covered stage bursting at the seams, with fans spilling way outside beyond the doors. Taking the crowd on an emotional journey of ups & downs as only Illenium can (well, with the help of friends Said The Sky and Day who were both up there with him playing live,) the set ranged from hardcore Illenium classics like “Crashing,” “Reverie,” “Crawl Outta Love,” “Needed You,” “Fractures” and dozens more,  to new spins like his Panic! At The Disco x Porter Robinson mashup which had the crowd . He seriously did a phenomenal job of incorporating all of the songs that had falling in love with him in the first place. We were actually very astounded at how well this set was put together and catered towards his dedicated fanbase. There was hardly a classic hit that wasn’t found in this one, and it created a beautiful overall depiction of Illenium for both longtime fans and for newcomers who needed a clue as to what the hype is all about. It was massively apparent how much of a following he holds down in the U.S. alone, as is also demonstrated well by the amount of bass-loving fans in this country as compared to other parts of the world. He even made a surprise pop-up performance the following day during The Chainsmokers’ set to debut their new Big City Dreamin’ collab. This one was a shock to many and left us very eager for more from Illenium as he continues to grow exponentially. First year at Ultra down in the history books from this incredible star.

The moment had come during Ultra’s ASOT (A State Of Trance) day that thousands were waiting for. We have plenty to rave about after Vini Vici left their visionary mark on Ultra’s Live Arena on Sunday. It’s tough to put words together that properly describe the energy aura that came over everyone at this breathtaking set. The ground was trembling as endless fans flocked to the Arena for hours of psytrance by the masters themselves. Making the performance all the more special was the fact that both Aviram and Matan of Vini Vici were there, as oftentimes the duo split up around the world with separate performances. Having both of the maestros there was icing on the cake, giving everyone present a tremendous extra energy boost (as if it was needed??) Fans lost their minds to staple psy records “Great Spirit,” “The Tribe,” “Free Tibet,” and “United” among a barrage of others. Ethereal vibes of trance were soaring through the atmosphere at lightning speed, and the duo was only just gearing up for their wild b2b with Infected Mushroom…sending fans into yet another indescribable realm of tribleness. As Vini Vici’s memo goes…‘join the tribe’ and we promise you won’t regret it 😉

THIS GUY. Left the Worldwide Stage at Ultra speechless. If there’s one artist that has managed to dive deep into the hearts and souls of electronic enthusiasts who also share a long history in the world of alternative/ pop-punk music, it’s Kayzo. Doing it right time after time, Kayzo’s raw talent in meshing together both electronic style and sounds of legendary groups like Blink-182, Papa Roach, and All Time Low (just to name a few) paves the way for his live performances going beyond 10/10 each and every time. Ultra saw Kayzo mix in Yellowcard’s “Ocean Avenue,” “Up In Flames” featuring Alex Gaskarth of All Time Low, and Fall Out Boy’s “Thnks Fr Th Mmrs” which were only three of the outstanding examples of how he automatically transports crowds into this nostalgic realm. The Worldwide Stage got a full dose of Kayzo’s pure thunderous presence on stage, leaving fans in utter bass heaven and in high anticipation for their next fix of Kayzo.

Fair to say she’s captivated just about every single soul that’s been fortunate enough to be part of one of her live shows? We think so. As she continues to cast a wider and wider net over her space-loving, bass-driven cult, REZZ successfully enraptures those who join her on the dark side, luring them farther down the rabbit hole every time. Taking flight from the first track with “DRUGS!,” “Purple Gusher,” “Green Gusher,” “Life & Death,” “Lucifer” and a slew of IDs, Space Mom diluted our brains with her one of a kind blend of wubs. The crowd marveled as the Worldwide Stage shook with spinning visuals, spidery senses, and hypnotic bass. Worldwide is such a beautiful fit for an artist like REZZ, where her visuals are so important and create such an experience for fans, so having them not only in front but up and above their heads brings an alternate immersion to life at that time. It was a stress-relieving and blood-pumping blast off into another dimension, and a pleasure to see REZZ back up on this stage doing what she does best.

Well…where do we start? To say Ultra Miami was explosive during Drew, Alex, and Matt’s set would be the understatement of the year thus far. The newly developed trio with Matt McGuire on drums absolutely expectations, wowing everyone that witnessed the monstrous shutdown. Hyping up the performance with heaps of social media posts alluding to the insane amount of prep that went into this extravaganza, the guys knocked this one out of the park, further cementing their unstoppable presence in music and performance. Ultra Mainstage was truly a spectacle as The Chainsmokers closed out the entire festival with another champion set that featured their everlasting anthemic songs, roaring bass that seemed as if Ultra kept on reserve just for Smokers, tons of lights & fire…the antics on. Everything from the black war paint on their faces, to Matt drumming with fire, to a drumline, to Drew running wild into the crowd mayhem, and to Alex holding down the fort with his one-of-a-kind escapades, it was clear these guys came with an adrenaline rush like none other.