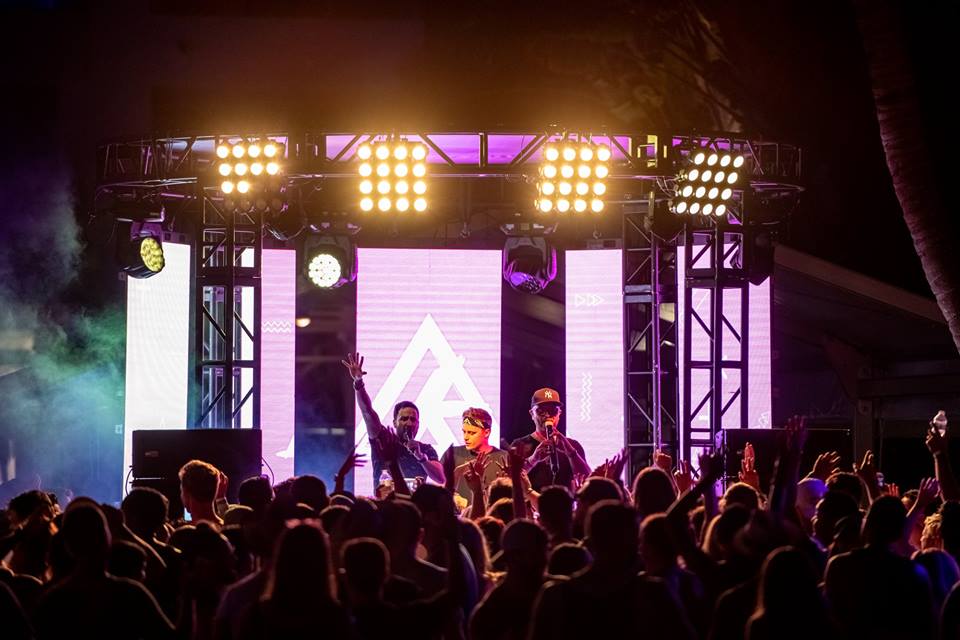 It’s five years now since Klingande brought his tropical vibes to the perfect city for his annual playground event. Fittingly centered in the heard of South Beach, Klingande’s Playground was just the right way to close Miami Music Week 2019 with a bang, and this year was even more significant for the French producer and DJ — his yearly Playground was turning five.

Beats and thousands of partygoers filled the pool and beyond at The Sagamore Hotel on Collins Avenue for one of the last day parties of the week. Who was on the bill in addition to headliner Klingande? Autograf, The Him, GoldFish, CID, Dom Dolla, Vintage Culture, M-22, Bender, and Nico De Andrea.

Notorious for his soothing and mellow vibes, Klingande set the mood for his Playground pool party — and moments before taking the stage, he sat down with The Nocturnal Times to chat about his fifth consecutive Klingande Playground and what the event means to him, incorporating live instruments and elements into his music and performances, and the release of his forthcoming studio album.

First breaking out onto the scene in 2012 as a duo, Cédric Steinmyller took the act solo in 2015, following the release of what was arguably Klingande’s biggest single, “Jubel,” in 2013. Since the release, Klingande has released prominent originals like “Losing U,” “Somewhere New” feat. M-22, “Pumped Up,” and “Rebel Yell” with Krishane.

We had a chance to sit down with the Ultra Records recording artist just before he took the stage at his milestone Klingande Playground 2019 to discuss the evolution of the yearly party, the vibe over the years, musical instruments and classical training, and, of course, what’s to come from the saxophone and piano-loving producer and DJ in this Nocturnal Times exclusive interview.

The Nocturnal Times: This is a big year for you as you’re celebrating the notable fifth anniversary of Klingande’s Playground. Has your vision changed at all over the last five years and how has the pool party evolved over the years?

Klingande: Well, to be honest, it hasn’t changed a lot. The vibe is still very much the same and for me it’s still one of my very best parties of the year — I’m always waiting for it. Like I said, I don’t think there are too many big changes, but you can never go wrong with this party because Miami this time of year, you can’t beat it, it is the best.

The Nocturnal Times: Over the course of its five year history, what have been some of the biggest differences for you? Whether it’s changes to the scene or to personal preference, etc.?

Klingande: I feel like this year, there are less DJs playing. The really big names are doing their own shows or doing lots of shows and pool parties, but it’s really hard because people don’t want to come out for just one act. There are so many fans now. This year when I was doing my lineup, I was really selective about who I added.

The Nocturnal Times: Do you get to stick around in Miami for a while or is it typically an in-and-out experience for you?

Klingande: It’s usually right in-and-out. That’s why, right after my show I am leaving and don’t get to do much. That’s why I don’t even really know much about what’s going on in Miami aside from what I’m playing. This time I’ve been here for 3-4 days, so I did get to see some of Miami and check out some other shows, but usually it’s not like that. And I still have to leave straight after my set tonight here [at the Playground].

The Nocturnal Times: Did you get to check out anything fun over the last few days in South Beach?

Klingande: I did hit up some of the pool parties, but I popped in and out.

The Nocturnal Times: Let’s talk a little bit about the music that you’ve been releasing recently as well as what’s to come for you musically. You just put out your single “By The River” with Jamie N Commons. What can you tell us about this single and how did you first link with Jamie for it?

Klingande: The single was written at a writing camp, and I originally thought the song was great, but it was missing something. It came to my mind to ask Jamie N Commons to sing on it, and that’s when I realized that was what it was missing; it was missing a solid voice to carry the song. I like to listen to a lot of folk music and stuff like that, so I try to introduce that into my music.

The Nocturnal Times: You do have a diverse musical background and are known for your inclusion of sax and piano in your music. Can you or do you play any instruments yourself?

Klingande: I played a lot when I was young, but I don’t really play very well anymore.

The Nocturnal Times: What can you share with us about your newly released music video, which was shot at the Canary Islands with Jay Alvarrez? Do you commonly release music videos?

Klingande: Yes. If I do, I sometimes just try to make an appearance in it. For most of the songs, we try to make one. This time, we didn’t want the regular love story, we wanted something more fun. That’s why we had the idea of working with Jay Alvarrez and we shot two video clips at the same time.

The Nocturnal Times: You’re about to start up your Intimate tour where you’ll be playing across Europe and North America, incorporating live instruments, and more. What can you share with us about this and the inclusion of live instruments in your music and shows?

Klingande: My album is all about live music. My dream is to one day have a full band with me at all times. For this tour, we are going to venues where we want to make a real connection with the crowd, that’s the most important thing. It’s not going to be like a normal show because I want to be able to showcase all of my music and not have it be like your regular set. I always have my sax player and violin player.

The Nocturnal Times: In September, you’ll be releasing The Album, your studio LP. What can you tell us about your new artist album? How long has the process taken for you and what made you want to release an album over various singles?

Klingande: I always wanted to release an album, but I never really had the time to do it. This year is the year I decided to do it because I really wanted to tell a story. We wanted to make an album that we would be able to play on stage and not have to worry. It’s about 70% complete right now, and I’m still touring so I have to make sure that I get it done in time. It’s challenging, it’s very challenging!

The Nocturnal Times: Are you able to share anything about the album with us aside from the fact that it’s a double album? Any collaborations or which of the tracks stand out most to you?

Klingande: There are no massive features in it because it’s not about that for me. It’s more about finding the right voice for the right song. I prefer to work with people who are not famous at all yet because it gives others a chance to discover a new talent. And there are no massive collabs, but I did do a collab with GoldFish for the album. Otherwise, all of the songs are just made by me. There’s no big secrets in it — it’s just me.

The Nocturnal Times: So for you, making an album wasn’t just about putting out an album. You wanted to tell a story and be able to incorporate these songs in your live shows?

Klingande: That is very important for me because most of the time I have to worry about whether or not a song I release is playable. Some are really low like 100bpm so I have to figure out how to play them — it’s very tricky, very complicated.

The Nocturnal Times: Aside from your tour and album, what else can fans expect from Klingande in the near future? Will you be releasing any singles before the album drops?

Klingande: There is another single that I’ll be releasing before the album comes out, which I’ll be premiering shortly during my set [at Klingande Playground Miami 2019]. Then maybe one more single, and then the album, which comes out in September.

The Nocturnal Times: Since you’ve said big features aren’t a huge deal for you, do you have any dream collaborations or features?

Klingande: For a DJ, I’m not sure about a collaboration, but somebody that I really admire is Flume. Flume I know would be difficult for us to collaborate, but I would love it. As far as vocalists, I love an indie rock voice.

The Nocturnal Times: What music do you like listening to when you’re not listening to or playing dance music?

Relive the 5th anniversary edition of Klingande Playground with the official after movie:

Related Topics:klingandemiamiultra records
Up Next