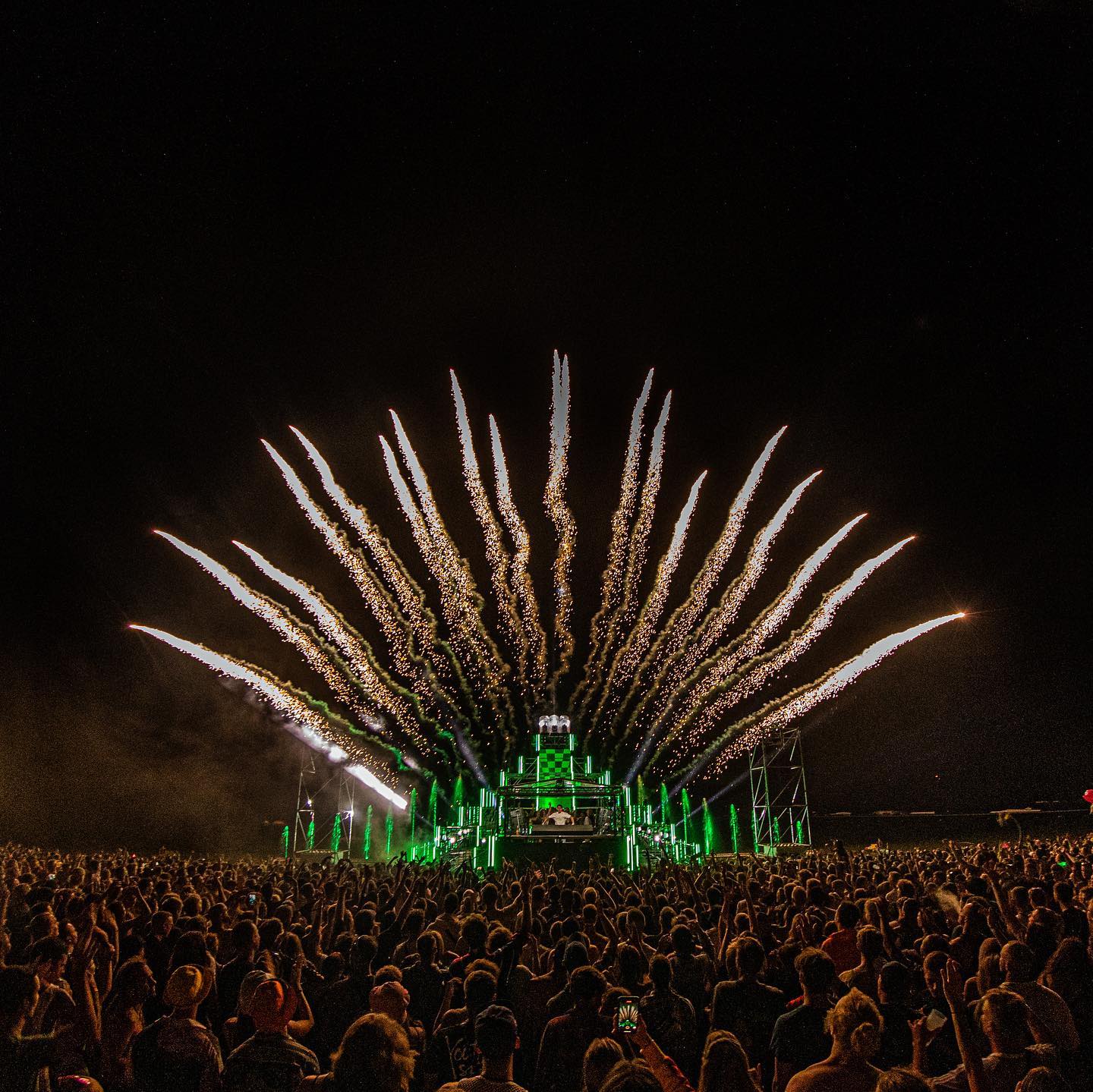 Three years ago we went to one of the best festival surprises of the year, NIBIRII. After three years this one-day festival finally has returned. To our surprise this festival was now two days including a campsite. With a fantastic lineup including Reinier Zonneveld, Deborah De Luca, Vini Vici, Koven, Netsky, Fox Stevenson and many more, we had some great sunny weather and a great variety of music to choose from with a great location, a good selection of food and even a lake to swim in.

With a great selection of Goa, trance, techno, and drum & bass the music selection was on par with what we expected from this festival. The four stages to dance and enjoy these artists where the Goa Pyramid, the Techno Tower, the DnB Forest and the Hidden Stage, with the hidden stage being a new addition. Hidden between the trees this stage had a natural cooling effect from the nice warm sun. We had an amazing time at the festival, the hospitality was great, the people were friendly, and the music was amazing.

Probably the biggest surprise in the DnB Forest was on Saturday where legends Noisa played one of their farewell gigs. Something no one expected happened, none other than the legendary Skrillex himself joined them on stage. During the day we had heard rumors and whispers between the party crowd that Noisa was going to do something special one of their very last shows. One can only imagine how fans reacted to seeing him on stage after a year-long break in the EU. Granted he only played the MC and did not play any tracks. But nevertheless this is one of these moments that will be talked about for a long time by those that attended this glorious moment.

Nocturnal Times: Hi Florain (Asché) thank you for taking time to sit down with us. How excited are you that Nibirii finally happened after corona? And did it meet your expectations?

Florian: This was by far the biggest project we’ve had in our 6 year history, so we were really excited after 3 years of waiting since the one-day-version of Nibirii festival in June 2019. We were really lucky with the wheather, which of course is the biggest concern that you can’t do anything about, we knew we’ll have a great location with the Badesee Düren and we saw lots of happy faces during the weekend. So all in all we have to say we learned a lot and are thankful for this great experience!

Nocturnal Times: Nibirii was 3 years ago one of the huge festival surprises for us. We really enjoyed it a lot. What do you think makes Nibirii stand out from other festivals?

Florian: Nibirii is a party series, that we already present in different locations like Bootshaus Cologne since 2016. The 3 -floor-concept with Goa/Psytrance, Techno and DnB was transfered to a festival and we have our 3 stages -Goa Pyramid, Techno Tower und DnB Forest – now instead. This year also a fourth one as we had so many great techno acts that we needed more space. Nibirii is a party home for many people since many years and they know what to expect from that brand.

Nocturnal Times: Tell us more about Aerochrone. Besides hosting stages at various festivals and hosting your own events, what does make Aerochrone so special?

Florian: We started in 2016 as a music label and then one thing came to another. As all of us come from the German creator scene and were already working with Sarazar, one of Germanys first video creators on Youtube, we had a strong network here from the beginning. After only a few months in 2016 we started Nibirii as a party series and hosted our first stage at Parookaville 2016. Since that we focused on three fields – presenting our own parties and festival stages, connecting festivals with our creator network and producing/streaming video and show formats. So today we would call us an event and production agency.

Nocturnal Times: You have been part of Aerochrone from the start. How did that came to be and how did you end up in your current position?

Florian: I’m having the honor to be the CEO at Aerochrone since day one. But we already started in a constellation that worked together very effectively before, so almost the whole team is there since day one and a few members joined during the years.

Nocturnal Times: This summer we met at several festivals. One of the things you do there is handling creator-camps. Please tell us about it. What is it and what is your goal with these camps?

Florian: We were hosting the creator camps at Parookaville and Sonnemondsterne in 2022, as also in 2019 and hopefully the next years. The idea is to put together a really compatible group of creators, that hang out together in real life. As the camps grew bigger and bigger – f.e. with nearly 60 people at Parookaville this year in our camp – we have to find several of these groups, that still remain compatibel when they meet in 4 or 5 days of camping. So we profit a lot from our creator contacts that we already had before starting Aerochrone. In the result we have many happy creator that celebrate the weekend together and show that on their socials in the most authentic way. No artificial placements and no requirements for them lead to the best content the festivals can have.

Nocturnal Times: As dealing with a lot of influencers yourself, would you like to be an influencer yourself or do you prefer to stay in the background?

Florian: I’m managing Sarazar since almost 7 years now and were lucky to have some kind of creator experience myself with the project Cirle Of Alchemists, where we were composing music for lots of big youtubers 2012-2016 and traveled the US and Costa Rica with Sarazar. So I have a pretty good insight on that life and everything it brings with it. My place is here at Aerochrone, where I can use all these experiences and contacts, put them together in different ideas and projects, and hopefully build great experiences for everyone out of it.

Nocturnal Times: What are your plans for the future with Nibirii? There was some controversy going on, my personal point was the pyramid stage. Last time this stage was so great with the waterfall and everything. Now I do understand you had a ton of lasers etc. put in there but since the festival is mostly during the day I felt kind of missing out there.

Florian: Nibirii festival will hopefully return in 2023 on the foundation of everything we learned this year and hopefully in times of less staff and material shortage. We are already talking to great artists and of course all the officials in Düren about the next level of Nibirii.

We are totally understanding that our epic pyramid has to return bigger and better in 2023. As you are saying our idea was to make it kind of transparent to keep the great view on the lake and on the same time put tons of lasers, pyro and smoke on it to have a very special optic. This optic was great at night as we think, but it didn’t work too good during the day. So lesson learned and there will be an other pyramid in 2023!

Nocturnal Times: Thank you for your time!

Florian: Thank you for having me!