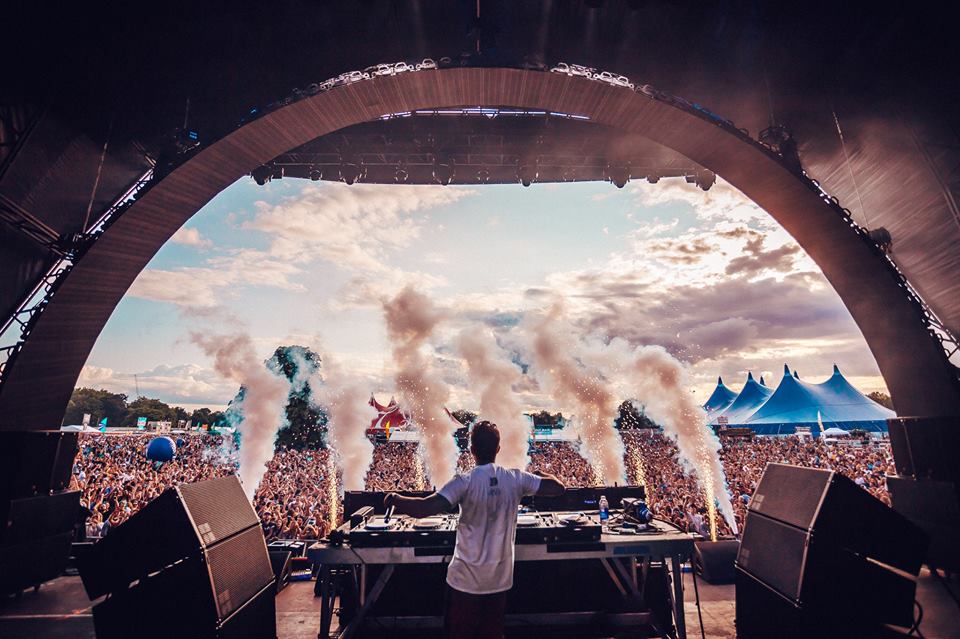 A name that dance music fans have come to know, love, and cherish every ounce of music by, British DJ/Producer Jonas Blue has become an absolute treasure in electronic music. Taking his atmospheric sound to the 23rd anniversary of Amsterdam Dance Event (ADE) last week, he proved yet again why his infinitely creative musical repertoire and showstopping live performances continue to blaze a trail through the industry.

2018 has been a pure roll of momentum for Jonas, as the year has seen him play his largest UK club show thus far at Electric Brixton, as well as taking the main stage at both EDC Shanghai and the mecca of all festivals: Tomorrowland in Belgium. Holding a residency all summer long at Hï Ibiza, Jonas also released a slew of slam dunk new music this year. From fresh singles like “Alien,” to “Hearts Ain’t Gonna Lie,” to his beyond massive hit “Rise,” Jonas also scored collaborations with Bantu, Shungudzo, and ZieZie for “Roll With Me,” and teamed up with Liam Payne and Lennon Stella for “Polaroid.”

Kicking off his week at ADE, Jonas burst out with an arsenal of booming music at Martin Garrix’s STMPD RCRDS Label night. Taking the stage at United Studios, an entirely jam-packed warehouse was roaring with energy for Jonas. Building up the night with his mesmerizing aura of sound, Jonas’ set progressed with heavenly melodies of his classic anthems like “Perfect Strangers” and “Mama” then transformed into nasty bass and adrenalizing drops. Throwing down a monstrous mix of Eminem’s “Next Episode,” the crowd went absolutely wild until the last second of his set. Jonas’ trap out to end the night was absolutely perfect, and another glimpse into the monstrous sound he is capable of producing. Beaming lasers and smoke machines filled the air as Jonas came to a close performing “Polaroid,” sending every fan into absolute dance paradise.

The Nocturnal Times: Welcome to ADE 2018! How does it feel to be here with all the beginning buzz and everything you have lined up for this week?

Jonas Blue: It feels great! I feel energized, it’s the first day but probably in a couple days time I won’t feel the same. I feel great and I’m coming here with a lot of ammo. We’ve got a brand new album coming out on the 9th of November, a new single with Liam Payne and Lennon Stella, and some great performances here. I’m doing the STMPD RCRDS Party tonight, I’m doing 538, I’ve got an album playback tonight so it’s a lot of fun. Last year I was kind of, what we call it in the U.K “mooching around,” but this year we’re coming back with a lot of business being done and a lot of friends to meet.

The Nocturnal Times: What is it about ADE that make it just a bit extra special as compared to the other hundreds of events you attend throughout the year?

Jonas Blue: Well I never got the chance to go to Miami, probably 10-15 years ago when the Winter Music Conference was this. It was a place to do business, hear the latest records, see the latest trends, meet friends, DJs and promoters. It was a great place to work and then it kind of stopped being that. Then ADE came along and it’s much more convenient being from the UK to travel to Amsterdam. I think it’s that there’s a lot of great parties here which is great, but then it’s time to do business and meet people and there’s a lot of DJs that I tour year round with, that I don’t get to see. So ADE is really just a great place to connect.

The Nocturnal Times: Are you looking forward to any friend’s performances this week in particular?

Jonas Blue: I’m just floating around honestly. I try not to plan other than meetings and work, with the parties I just try and go with whatever and end up in some club or karaoke bar or something.

The Nocturnal Times: Your new single “Polaroid” alongside Liam Payne & Lennon Stella is already a big hit. How did you all come together for this track?

Jonas Blue: Liam I met in December 2017 in the UK. We do a lot of radio events around Christmas time, and just being a massive fan of One Direction I mean I loved the group and I loved him. He was starting to do his solo career at the time, and being a massive fan of his song “Strip That Down,” I just wanted to collaborate with him if I’m honest. It was around that time I had written “Polaroid” with JP Cooper who I had previously written “Perfect Strangers” with and I knew it was a song for Liam. I knew that we should collaborate on it, I sent it to him a few weeks later and asked him if he’d be up for a collaboration. He said for sure and here we are!

The Nocturnal Times: Tell us about your vision for your debut album BLUE?

Jonas Blue: The great thing with this album is that, although it has the music people know me for, I’ve been able to explore different sounds. There’s some trap music on there which people wouldn’t expect from me but then there’s incredible classic pop songs on top of them. I’ve been able to explore loads of different sounds and different songwriting techniques, and that’s a trait that I’m going to keep doing throughout future albums: just exploring different things. It’s not me doing 16 different versions of Mama on the album. I’ve been able to do all those different things and some great collaborations. I think I’ll always do that thing with finding new talent and established talent. I love blending the two together so if I can keep doing that, I’m all about finding unique voices and people who are extremely talented and just overshadowed sometimes.

The Nocturnal Times: What can you share with us about the featured collaborations on BLUE?

Jonas Blue: It’s full of collaborations. One of the people I was most looking forward to collaborating with was Jessie Reyez who is an incredible new artist. She’s just written two of the biggest songs of her career for Calvin Harris with “One Kiss” and “Promises.” She has two songs on the Kamikaze Eminem album, and she is about to blow up. We have this song together that is just incredible and I remember her sending me a really early demo of it on her guitar on a voice note, and I fell in love with it. When it came time to producing the album and getting the single done I fell in love with it all over again. That’s my favorite song on the album and one collaboration that I’m most looking forward to people hearing. There’s random collaborations on there like me and Kaskade, there’s some upcoming talent like Nina Nesbitt, there’s Joe Jonas on there, Liam Payne on there. There’s a whole load of different people!

The Nocturnal Times: After a whirlwind summer including a residency at Hï Ibiza, what were some of your top highlights of the season or year?

Jonas Blue: Tomorrowland Mainstage was one that just, yeah. That was everything for me this year. I mean every week in Ibiza was incredible, but then also Japan. Doing a tour there was, again, just out of this world.