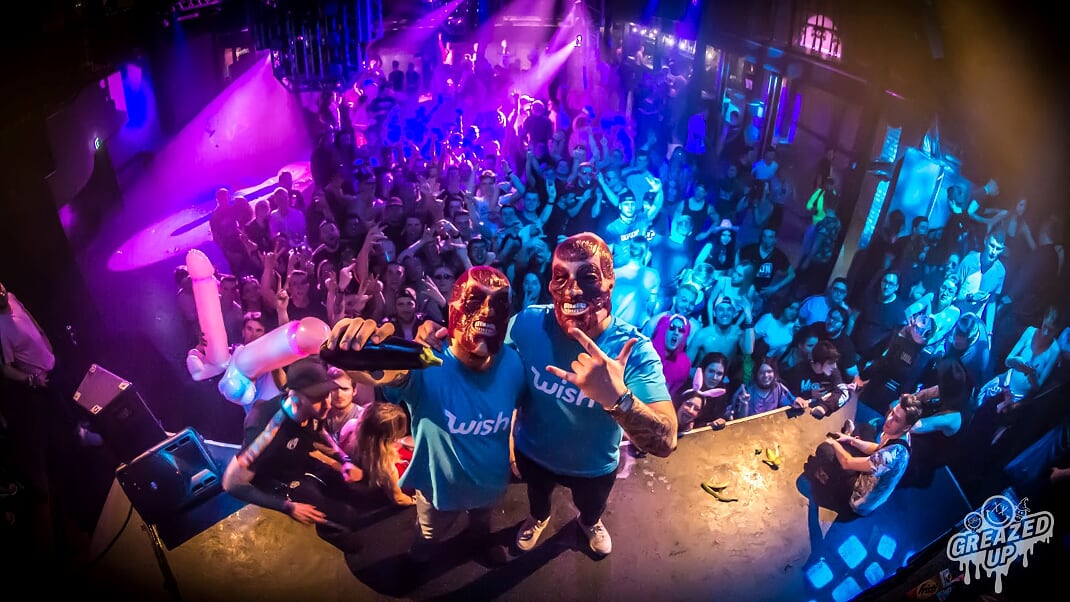 Sometimes you have to leave the comfort zone in order to get some new experiences. Perhaps what we experienced at GREAZED was not suited for everyone, but it was definitely a night to remember. We weren’t sure what to expect from this greasy night but were eager to be part of it. When we asked Bram (manager of some of the performing artists) how he ended up being part of this ensemble his response was pretty straightforward:

“I rolled in to a life filled with Greaze by pure coincidence. I worked with a Hardstyle label called Theracords for several years already when this new idea for a fun and sexy act just came about out of nowhere by one heavily bearded guy (also releasing on Theracords) and his best friend. A 200 bpm remix of a Shania Twain song was made and the Greazy Puzzy Fuckerz was officially on the map. Since I already worked closely with these guys it was a natural process for me to also be involved in the strategy of this silly act. Everyday working on GPF material is a fun day basically. There are no limits to what we can and can not do! We like to do things different than anyone else. This vision gives you the freedom to go beyond any basic marketing books and start getting really creative and silly. The guys behind GPF are absolute freaks, in the most positive, fun and humble way possible! They’ve grown to be good mates of mine and this makes working on GPF related stuff not feeling like work at all. Shout out Greig and Matty for being the most retarded and amazing fuckerz out there! x #RIPMATTY” – BRAM

What once was the biggest club in the Netherlands with a capacity of over 5,000 people across many different rooms is now just a former shadow of itself. The “Time Out” used to be a pinnacle in the Dutch nightlife scene. Every weekend people flocked towards this temple to celebrate their love for music. It is a shame that so many great clubs are sizing down, or disappear in total. Now it is only open on select nights, and it may only be a selection of rooms open at a time. One of these select nights was this night, which turned out to be one strange but memorable time.

The club had reserved one room for this night. About 900 people were attending this event. Most of them in old school gabber outfits or dressed in something pink, and some people completely went over the top in pink fluffy onesies with dildos hanging out of their pants! The organizer had brought a huge array props ranging from big inflatable penises, cucumbers, bananas, and eggplants to broccoli for the crowd to party with. A lot of people and artists were also doing the greazy claw (you put your hand in a claw motion and dance like that). We have seen many weird things before but the huge array of props was oddly not even the weirdest part of that night looking back.

The line up was mostly consisting of artists that were signed to the label and their management. So it is safe to assume that most people knew what was going to happen. With Mizz Behave playing a nice decent set to warm up the crowd, and Sickmode, Riotshift and Caine already getting intenser with each set. At one point it felt that each DJ playing was just upping the ante. The weirder the better it seemed.

The Russian Village Boys stand as the funniest surprise of the evening. Already making a name for themself in the Netherlands, these guys are about to embark this summer on a massive European tour with most notably a gig at the infamous Bootshaus in Cologne.

At one point Rene Karst (a Dutch pop singer) was performing some of his songs and then some time later he teamed up with GPF, and the crowd loved it. At a certain point during his performance Rene put on a “KETA”-cap the crowd lost it. GPF meanwhile kept on destroying the club. With the help of MC Raise they made to audience part of the whole spectacle. With mosh pits and all those props in the crowd, this was a night that was far from over.

And if you didn’t think it could get any weirder, Lil Texas was preparing his set in the backstage. He suddenly got the idea that it would be great to play his set in his boxer shorts. And yes ladies and gentleman, he did. When he came out some girls went wild, it felt like attending a Justin Bieber concert! The ladies sure love this sexy piece of Texas ass.