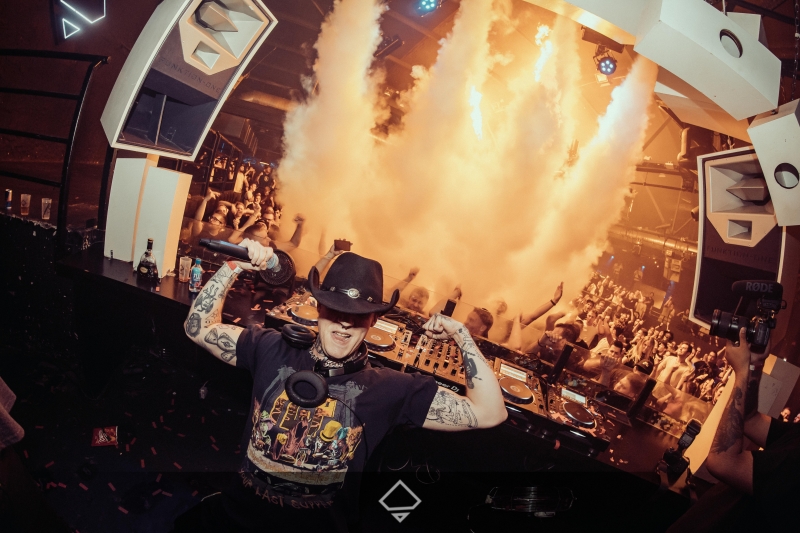 PLUS AN EXCLUSIVE INTERVIEW WITH LIL TEXAS

When Las Vegas based heavyweight, Papi Gordo, aka El Diablo aka Carnage, comes to visit the Bootshaus you know it is going to be massive.

During the summer months amid all the big festivals there is still one club that knows how to deliver a solid club night. They called, he came. Heavyweight Records presents Hell. Carnage, Gravedgr, Lil Texas (with guest appearance by Odium) supported by Bootshaus resident Elle Rich (opening and closing). One of the sickest line ups to see in a club. After seeing Carnage and GRAVEDGR at Parookaville I knew this would be getting legendary. There was even some exclusive “Bootshaus x Heavyweight” merchandise available for dedicated fans.

It was a night to not to be forgotten. Every DJ delivering a massive solid set. The legend Carnage even went in the crowd to motivate them to make a mosh pit. (3 security people having his back) still it was great to see a DJ move away from the turntables to interact with the crowd like this. The Bootshaus is famous for having one of the dedicated crowds in the club scene. Regular mosh pits, sit-downs, left-rights and such are very common there. If you don’t like those kind of things you best not move towards the middle and the front of the DJ-booth. Furthermore they had arranged these dancers in demonic outfits that took the stage with their show consisting of dancing and fire-spewing. Overall, it fit the theme of the night really well.

Once you have seen GRAVEDGR perform in his outfit, he really looks like he quit his shift at the graveyard and started DJ-ing. Only one can imagine how hot it is underneath his outfit. As we requested to do an interview with him his only words where “GRAVEDGR doesn’t speak with the press”. An epic statement I could totally understand. Also he almost never does take any pictures with fans. The life of GRAVEDGR is pretty secluded. Who is he, where does he come from and where is he going? Questions we might be able to answer in the future.

In between all the music we also did an interview with the leader of the cult of speed, the one and only Lil Texas. If you love the 200 BMP tracks, this is the guy you want to go to. We talked about music, Amsterdam and when the camera went off we talked about movies, politics and life. It was just scheduled for a 10-minute interview otherwise you would be watching 45 minutes of other worldly talk now. Nevertheless it was great to see such a star take his time for a conversation. Hope you enjoy the interview as much as we did making it.

Afterwards we headed to watch his show. The ones that survived Carnage’s show were ready to be taken down by the “Western Kink Daddy” himself, a barrage of pure massive BPM hardcore tracks got fired upon the crowd, there was no hiding from it only dancing. After Odium had joined the booth to play their newest track the night was coming to and end for us. We watched the first couple of tracks of Elle Rich her closing set, she flawlessly took over where Lil Texas had left. Barraging the people with some serious trap music. After a while we packed our bags and headed home. Thank you, Bootshaus, for another great night.

Additional photos can be found HERE.