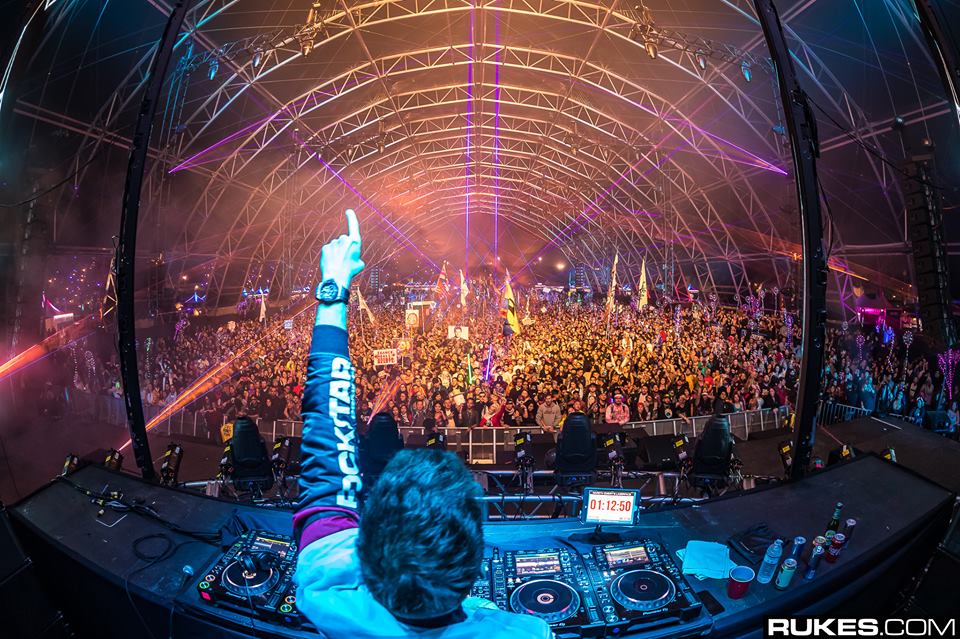 2019 has finally arrived, and what better way to have spent New Years Eve than with 7 hours of pure trance by one of dance music’s most treasured gems, Gareth Emery. The Brooklyn Hangar was riddled with a truly sensational journey through music by Gareth and fellow comrades Emma Hewitt, Ashley Wallbridge, and Jonathan Mendelsohn.

As fans began to trickle in for opening at 9pm, Gareth took the stage amidst the dark warehouse. No lights, piano driven melodies, quiet sound seeping through the speakers, and a soft, sonic start to the expedition ahead was the perfect kick off to the night. Arrays of bright lights came into play at 10pm, and Gareth wasted no time getting rolling rhythms booming in his second hour, building up the volume and power with each forthcoming tune.

Brooklyn’s lead up to midnight was simply surreal. The crowd’s screams said it all when Gareth dropped Martin Garrix’s 2018 anthem “High On Life” just before midnight. As we’re sure fans came with guesses as to what the 12am song would be, attendees were delighted to hear none other than 2017’s ASOT Tune of the Year “Saving Light” swinging them into 2019 on an empowering note. Ashley Wallbridge then joined on stage as the duo threw down “CVNT5” with video circulating behind them of the ever-entertaining world of CVNT5. An entire two hours by the Garuda bosses was of special happenstance, and in perfect timing to get psyched for their impending collaborative album. Their set featured both old and new Gareth x Ashley tracks, as well as popular hits like Axwell Λ Ingrosso’s “More Than You Know,” Calvin Harris’ “Sweet Nothing,” and many more.

From 1-3AM, the set progressed into heavier tones like a thunderous mix of Gareth’s classic banger “Hands” beneath a burst of celebratory confetti. The marathon set was done with further assistance from vocalist Jonathan Mendelsohn, who joined Gareth and Ashley at the tail end of their duo performance. The Brooklyn-born native boosted the night with a special few minutes of his electrifying presence and melodious vocals . Gareth’s emotive rendition of Ed Sheeran’s “Castle On The Hill” was a glorious welcoming into the most angelic portion of the night, brought to life by arguably the best female vocalist in trance, Emma Hewitt. Together they performed their brilliant single “Take Everything,” which only just arrived mid-December. Undoubtedly one of the most heartfelt moments of the seven hours, everyone in house felt the unison as they collectively boomed the lyrics. The addition of Mendelsohn and Hewitt really contributed to a wonderful overall experience, where the night was brought together by a multitude of friends, good times, and unforgettable memories.

More featured highlights included Cosmic Gate’s Grammy nominated remix of Gabriel & Dresden’s “The Only Road” as well as Ruben de Ronde & Elevven’s remix of Morgan Page’s classic “The Longest Road,” both released in 2018. A$AP Ferg’s “Plain Jane,” which has been a frequently rowdy few minutes in his recent sets, also made the cut. Perhaps one of the most rewarding moments of the night was right at 4am curfew, when nearly everyone who showed up at opening was still there, giving 100% of their energy to close out the evening. New York outdid itself this time around, and Gareth was beyond appreciative towards the crowd in his recap Instagram post:

Seven hour set last night. . Madness. . Longest I’ve ever played (the only other 7h was at Sankeys in Manchester in 2011). . The mad thing about last night was it still looked like this at 4am. . New Year can be a washout after midnight. People usually go too hard to early and by 1am it’s dying out… and frankly I was expecting the last hour to be a proper graveyard shift. However that didn’t happen at all. . New York you did yourselves proud. What a city. What people. Amazing 🙏 . Saving Light for the NYE moment. Yep, not very original but a beautiful moment and we timed the drop bang on midnight to the second… so I’d say that was a job well done even though the confetti and co2 didn’t work 😬 . Big love to @emmahewittofficial @ashwallbridge @jonathanmendelsohn for sharing the stage with me, and @nicelasers @kassyruimy @stevencunniffe for hard as fuck work behind the scenes.. . Oh and WE RECORDED IT TOO 🔥🔥🔥 . Happy New Year 🎊🎆 . #openxclose #trancefamily #newyearseve #savinglight #happynewyear #garethemery

As if experiencing these seven hours in person wasn’t enough, Gareth and his team have made the full set available now on Soundcloud. Peep below to hear the insane delivery of this magnetic production come to life.