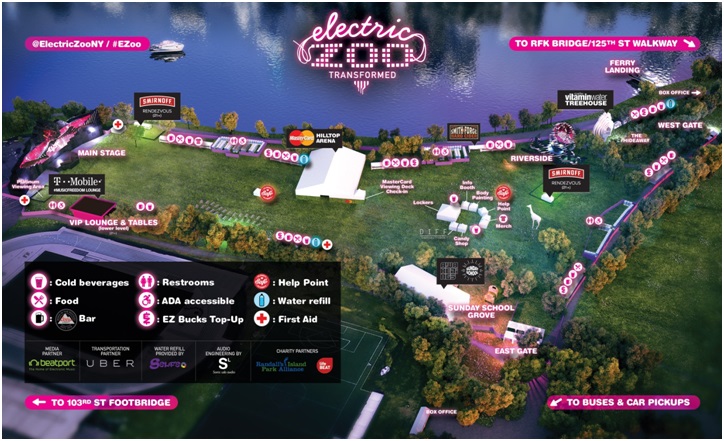 Taking place from September 4-6, 2015, EZoo Transformed will bring more than 90 electronic dance music (EDM) acts to the Tri-State area. Headliners at this year’s event include The Chemical Brothers on Friday, Above & Beyond on Saturday, and Alesso on Sunday.

Vitaminwater: Electric Zoo has also added a new stage to their transformation. This year, vitaminwater will sponsor the Treehouse, a newly added festival getaway. Marking the first time the festival will host a shaded area by the East River. The vitaminwater Treehouse will include a weekend soundtrack from NYC local DJs including: Ace Alvarez, Ajai Alai, Dev Bhandari, Dudenguy, Fahad, George Vala, Jean Pierre, Minutia, Nathan Kersaint, Repete, Salvo, Shahar, Shneur & Teo, NRS and Tal Ohana back to back with Bru. The #1 nutrient-enhanced water beverage will be offering samples and motivating fans to #hydratethehustle.

T-Mobile: Festival goers are encouraged to enjoy great views of the main stage from T-Mobile’s #MusicFreedom Lounge with a VIP double-decker viewing deck, a special T-Mobile ferry with its own DJ, (simply show your T-Mobile phone for Fast Track Entry at both the Manhattan ferry stop and East Festival Entrance on Randall’s Island), plus, T-Mobile will unleash the livestream on Beatport’s channel on Twitch, where fans around the world can watch the festivities online (additional details to be announced very soon).

MasterCard: MasterCard is sponsoring the Hilltop Arena this year, which includes a jam-packed talent roster consisting of sets from Galantis, Gramatik, Excision, Headhunterz, GRiZ, The Glitch Mob, Keys N Krates, Coone, Bro Safari, and more. Additionally, the Hilltop Arena will include an exclusive viewing deck and will deliver Priceless Surprises to its cardholders all weekend long.

MillerCoors: The brand returns for its sixth year at Electric Zoo, and this year they’ll be pouring and sampling their cider Smith + Forge.

Smirnoff: There will be two “Rendezvous Lounges” at EZoo: Transformed, which will offer attendees a break with Smirnoff specialty cocktails.

Additional sponsors of EZoo: Transformed include: Diff Sunglasses, Selfeo App, Beatport, Secret, and Snapchat, which will be running a Live Story to capture the experience on the festival grounds.

This year’s official Electric Zoo pre and after parties will take place at venues across NYC including: Pacha, Marquee, Webster Hall, Output, and Lavo. For more information about the Electric Zoo After Parties, visit electriczoofestival.com/afterparties/.

For more information on Electric Zoo: Transformed and to purchase tickets, visit electriczoofestival.com.

View the set times for EZoo: Transformed at electriczoofestival.com/set-times/.