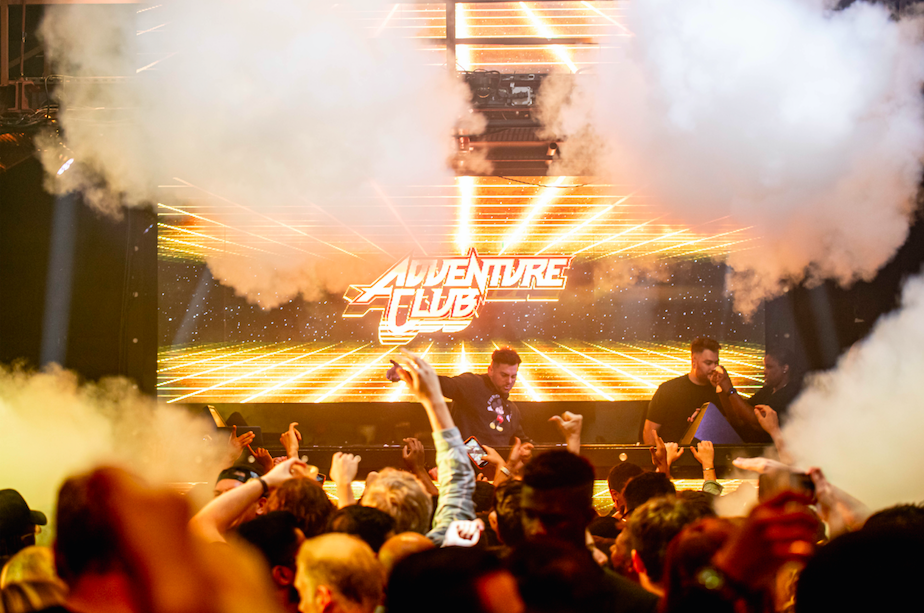 New York City underwent a full dosage of explosive force this past Friday as Adventure Club stormed through Marquee Nightclub on an exhilarating high. Fresh off their Death or Glory Tour and riding the wave of their newest single “Life Long After Death,” the Canadian duo continues on through Summer with a few more festivals to round out the season.

Friday night at the city’s Marquee was a solo Adventure Club set by Leighton as Christian wasn’t in tow, but nonetheless there was no shortage of energy and the performance overall was wild. Encompassing all sorts of genres, Leighton’s set hit wavelengths ranging from dubstep, rap, hip-hop, rock, and even country. Turning tunes like “Ain’t No Mountain High Enough,” “Tubthumping (I Get Knocked Down),”  and “Tequila” into floor-combusting smoke, sensory overload was never more than a blink away. Regardless of where each song began, you could be sure he was about to smash the beat down by the end of it, which kept the night rolling straight on.

It’s certainly a special feeling to stand in the presence of an artist who is able to completely lose themselves to the music alongside their crowd, and Leighton held down his own groove all night long which was the cherry on top of his blood-pumping performance. As the lights and strobes flashed heavier and the music got sexier, New York fell under Adventure Club’s glistening spell in a heartbeat. One of the special things about seeing a duo (or in this case Leighton) like Adventure Club is how passionate they are about their music. Their energy is all-consuming and sticks in your mind well beyond leaving the club’s doors, which to us is the sign of a successful and memorable show.

Starting the night off (and closing it out,) was Brooklyn’s own talent Noorlind, who used tracks like Marshmello’s “Quiet” and “Happier,” Kaskade’s “Fun,” and Diplo and Elle Goulding’s “Close To Me” as only a few of his infectious numbers to rally up the crowd. Mixing an exciting array of styles, drops, and tracks, Noorlind knew just the right mood to amp up the busy club. More and more fans poured in to dance their hearts out to dance staples including Kaskade and CID’s “Sweet Memories,” Axwell Λ Ingrosso’s “More Than You Know,” Galantis’ “No Money,” and Tiësto’s everlasting club banger “BOOM.” Sandwiched in between these classics were Adventure Club’s own tracks, which varied from gushing bass and heavy bangers to songs that put you straight in your feels like “Crash 2.0,” “Limitless,” “Frequency,” and “Wonder.”

The setting at Marquee was comfortably packed but not overcrowded, leaving space for raging dance moves and of course the all-important headbangs. Carrying on well into the afterhours, those who remained at the club until the end of the night left sparkling and magnetized, looking forward to the next time around with Adventure Club to soundtrack.