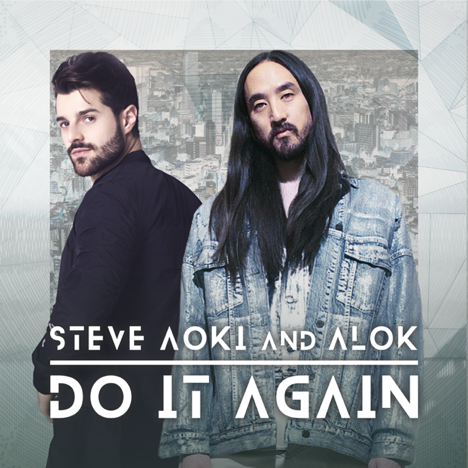 Superstar DJ and producer Steve Aoki has collaborated with Brazilian giant, Alok, for their first ever joint release and music video, “Do it Again.” This animated video directed by Reece Charchol runs on the premise of the duo going on a psychedelic adventure through different realities while they escape a shape shifting villain masked as a bunny rabbit.

“Do it Again” brings some solid house vibes while still honing in on both Steve Aoki’s and Alok’s classic sounds. The track compliments the trippy visuals extremely well as Steve Aoki and Alok evade the evil bunny. Viewers will be grooving along to the bass in this animated journey through worlds.

Steve Aoki is a two-time GRAMMY-nominated DJ and producer, and one of the most successful American cross-genre artists collectively counting 1.5 billion music streams on Spotify with an additional 2 billion music streams on YouTube. In 1996 he founded the iconic record label, Dim Mak Records, which is a powerhouse in the electronic music scene today. Aoki has helped launch the careers of global acts like The Chainsmokers, Bloc Party, The Bloody Beetroots, The Gossip, and The Kills, among many others. Dim Mak today counts more than 1,000 official releases from the biggest acts and most buzzing newcomers across EDM, indie rock, hip-hop, and beyond over its two-decades-plus discography.

As a solo artist, Steve Aoki has a loaded roster of tracks alongside his debut solo album, which lead him to his first-ever GRAMMY-nomination for Best Dance/Electronica Album The Neon Future series, which includes Neon Future I (2014, certified gold by the RIAA), Neon Future II (2015), Neon Future III (November 2018), and Neon Future IV (spring 2019); and the hip-hop centric Steve Aoki Presents Kolony (2017). In 2018 he worked with K-Pop stars, BTS, on the popular track “Waste It on Me” (2018) which landed at #1 in more than 60 countries with 4 million streams in the first 24 hours. It also crossed the threshold as the #1 worldwide trend on Twitter with 1k+ retweets per minute and has collectively racked up nearly 1 Billion streams on streaming services worldwide.

Alok is currently the highest streamed Brazilian male artist in the world and the first to reach 1.06 billion plays on Spotify. With a world that revolves around music, he has been an ambitious producer, creating music for well over a decade. He has become a huge superstar in the Brazilian music scene, winning awards such as ‘Best DJ in Brazil’ two consecutive times, and placing at #13 in DJ Mag’s annual Top 100 awards. In 2018 he became the only Brazilian to place on the Billboard Dance 100 list, occupying the 72nd position.

Both artists have reached unreal accomplishments in the music industry, and fans are stoked to see this historic collaboration take place as another huge milestone in their careers.