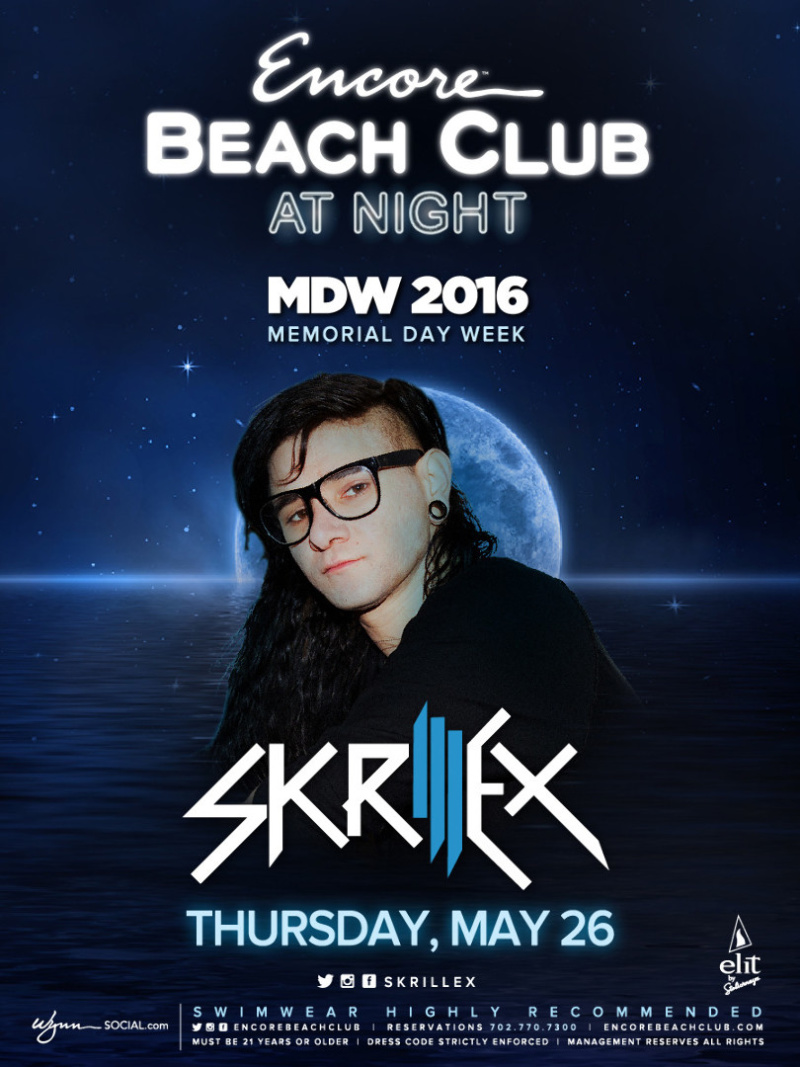 Skrillex at Encore Beach Club at Night will draw thousands of electronic dance music (EDM) lovers and nightlife enthusiasts to the famed pool club located at Encore at Wynn Las Vegas for the start of MDW 2016.

From First To Last to explosive multi-Grammy Award-winning electronic force, Sonny Moore, now better known as Skrillex, has spent the last few years touring the globe as a successful solo artist and as one half of Jack Ü, alongside Diplo.

Jack Ü released their debut album in 2015, Skrillex and Diplo Present Jack Ü, which included the hit singles: “Take Ü There” feat. Kiesza; “To Ü” feat. AlunaGeorge; and Justin Bieber’s comeback single, “Where Are Ü Now.” Racking up Grammy Awards in 2016 for Best Dance/Electronic Album with Skrillex and Diplo Present Jack Ü and Best Dance Recording with “Where Are Ü Now” with Bieber, American Music Awards, and MTV Video Music Awards, Skrillex has been dominating the scene.

Skrillex released his debut studio album Recess in March 2014 through OWSLA/Big Beat Records, which assisted in catapulting the musician to the top of the electronic scene—where he’s remained ever since.

This year has already proven to be another chart-topping year for Skrillex, who has already released productions: “VIP’s” with MUST DIE!; “Pretty Bye Bye” with Team EZY feat. NJOMZA; “No Chill” with Vic Mensa; and “Killa” with Wiwek feat. Elliphant. Moore has also provided remixing this year for Torro Torro (“Make A Move”), GTA feat. Sam Bruno (“Red Lips”); and Hundred Waters (“Show Me Love”).

Tickets for Skrillex at Encore Beach Club at Night at Wynn Las Vegas on May 26, 2016, are available HERE.

For more information about Encore Beach Club and to view an upcoming events calendar, visit http://encorebeachclub.com/calendar.