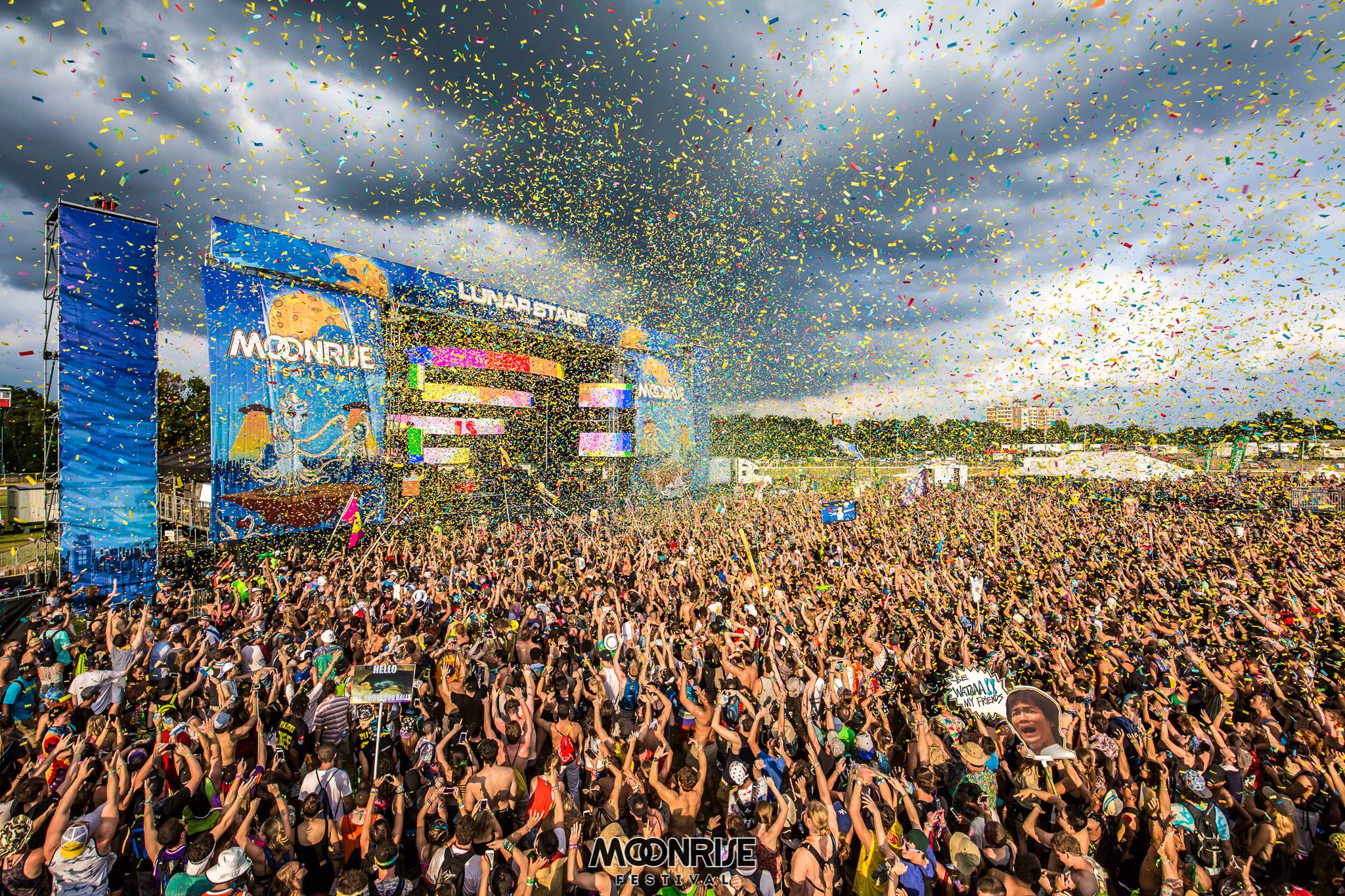 This past weekend, thousands of party goers assembled from across the country to watch the Moonrise at Pimlico Race Course for the third year in a row.

Moonrise Festival has put Baltimore on the EDM (Electronic Dance Music) map, as the festival has brought some of the biggest DJs in the world to throw down their best sets at the historic Pimlico Race Course. The gargantuan, picturesque venue is an open, grassy field with more than enough room to party and relax, and the trippy artwork and attractions could bring out anyone’s inner hippie. The race course houses four stages (two main stages and two tents) placed an ample distance from each other, along with a ferris wheel and food venues as far as the eye can see. The festival even featured a mechanical shark, (not a mechanical bull, but yes, a mechanical shark) which the adventure-seeking fans could take for an interesting ride. Overall, Moonrise created an immersive wonderland in the pocket of inner city Baltimore, and the music made for an unforgettable weekend.

The hot weather of day one didn’t stop the anxious attendees from flooding through the gates at 11AM. Fans cheered with excitement as they entered and dispersed to catch their first favorite acts of the day. Opening the festival were DJs such as Cheat Codes, Hunter Siegel, Manic Focus, Emancipator, Apashe, Bear Grillz, Jerry Folk and Louis Futon. As the day grew later, the acts grew bigger and the sound became louder. Ghastly took the Solar Stage by storm as he drew hundreds to the tent when he opened with the theme song from Pokémon Go. R3hab attracted a stampede of party goers to Stellar Stage around 6PM, as he dropped tracks such as Garmiani’s “Bomb a Drop” and his remix of “This is What You Came For,” featuring Henry Fong. The crowd could barely contain themselves as Flux Pavilion brought the bass with his famous “I Can’t Stop,” and “Bang,” by WAVEDASH.

Tritonal was another major day one highlight, as Tritonians gathered to watch the sun set and raise their hands to their new track, “Blackout,” and classics such as “Now or Never” and “Untouchable.” Once nighttime settled across the grounds, the main stages lit up with extraordinary LED screens and fire effects. The Chainsmokers dominated Stellar Stage with their hits, “Roses,” “Don’t Let Me Down,” and their newest track, “Closer.” Bassnectar fans packed out Lunar Stage with the biggest gathering of they day and wasted no time in turning up to “TKO,” featuring Rye Rye and Zion I and “Zogdilla.”

Marshmello has exploded onto the scene this past year and Mellogang members packed out the Solar Stage tent for his highly anticipated set. Fans lost their minds as Marshmello opened with “My Name Is” (Marshmello version) and “Everybody Know Me.” He also surprised the crowd by bringing out A$AP Mob for an unforgettable live collaboration. The night wouldn’t be complete without his new hit, “Alone” and his remix of Adele’s “Hello.” Mello’s set was complimented by an unbelievable light show featuring an array of lasers and LED screens, which made for an unforgettable show.

Just when you thought day one couldn’t be beat, day two came along and stole the show. Major acts such as Lost Kings, Ilan Bluestone, Gramatik, San Holo, Nghtmre, Crywolf and Redlight dominated the early hours. Gareth Emery ignited Stellar Stage with his classic hit “U” and his new track “Reckless,” featuring Wayward Daughter. Of course Gareth’s set wouldn’t be complete without featuring “CVNT5,” and reminding the crowd that they needed to “get a bit ratchet” for that one.

Tchami played an incredible future house set, followed up by Yellow Claw’s trap filled, head banging performance which featured a live performance by singer, Rochelle. Tiësto wowed the crowd with a stellar set, featuring fan favorites such as, Hardwell and W&W’s “Jumper,” Ookay’s “Thief,” and his hit, “Wasted. Moonrise Festival became beautiful now as Zedd closed out Stellar Stage and the bass from Excision’s closing set could be felt across the race course.

Moonrise Festival has become major contender in the Northeast and is an event that should be put at the top of anyone’s festival “to-do” list. After the major success within the past three years, this festival is here to stay, and we can only wait in anticipation for the release of Moonrise 2017’s lineup.