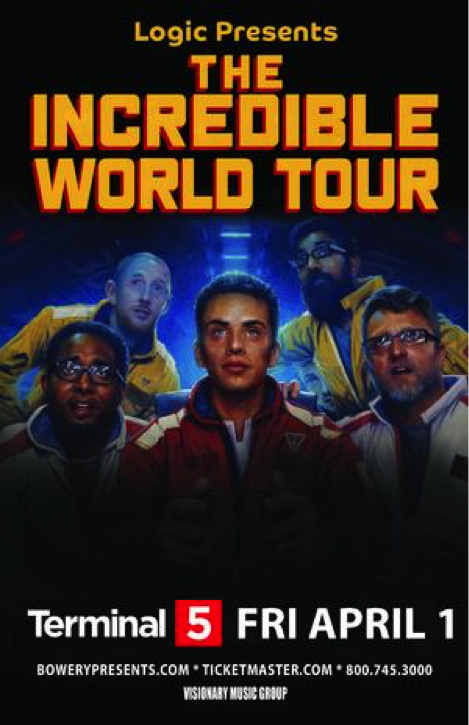 Logic embarks on The Incredible World Tour and is slated to make his Terminal 5 debut on April 1, 2016

Uprooting his rap career from his hometown of Gaithersburg, Maryland, the up-and-coming rapper has been taking the music industry by storm since he was only 17. His authenticity and dedication to his music is what gained the rapper millions of fans, all stemming back from the days of his smaller Maryland shows. The talented lyricist recently released his sophomore album on Def Jam recordings, The Incredible True Story, two years after the release of his debut album, Under Pressure.

The Incredible True Story album contains 18 tracks, skits included, presenting the diversity of tracks scaling from jazz to electronic. An adventurous tale of two space travelers fighting their way through the galaxy to reach planet paradise in the future, this kind of masterpiece doesn’t come often.

Logic made a recent appearance at a Diamond Supply shop in NYC, but the cops had to shut it down due to the overwhelming crowd. If this is any indicator of what the artist has to bring to the Big Apple, the attendees are in for quite a show. Fellow lyricist, Dizzy Wright, will be on The Incredible World Tour as added support.

Logic is returning to the city that never sleeps on April 1st, and doors open at 8pm. You can listen to The Incredible True Story HERE:

Tickets for Logic at Terminal 5 are available HERE!