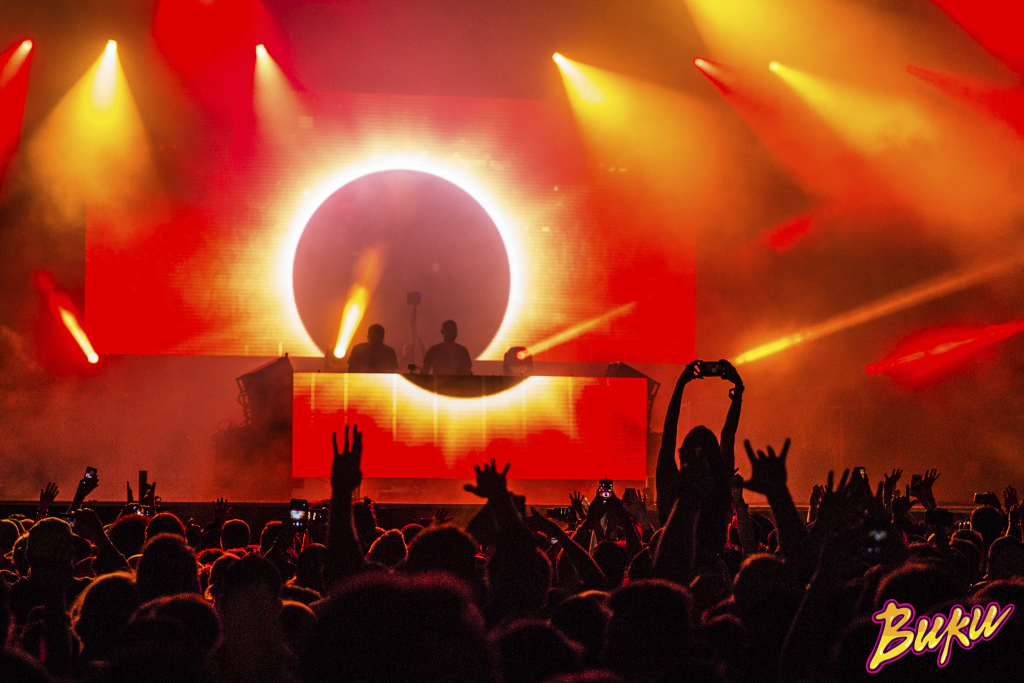 With its third sold out festival since the inception in 2012, Buku Music and Art Project was home to just over 30,000 people this past March 2016. Attendees traveled from across the country; setting out to experience the dynamic industrial backdrop in the heart of New Orleans. With dim weather conditions forecasted, there was still no damper on the mood of Buku attendees.

Upon entering the gates you had the choice to venture off to five different stages. The Power Plant played host to the main outdoor stage, located immediately on your right when entering the venue. To no surprise, Power Plant easily cranked out the best sound quality at the festival making it home for some of the weekend’s finest performances. No matter how large the crowd was or what spot you were in, it was a good show to listen and experience with the superb production.

There were also two additional outdoor stages. The Front Yard, located on the far side of BUKU, was a project hosted by students of the hometown “Upbeat Academy.” Upbeat Academy is a youth program aimed at teaching at-risk children skills in all aspects of music industry and production. Buku also did the service of donating a portion of all ticket sales to the grass-roots academy. A novel and admirable idea focused on helping the next generation of musical talent, the Front Yard was just another example of Buku’s open and supportive brand. The Back Ally was the other outdoor stage that provided a cool, sexy, urban stage with stunning views of the Mississippi River. For a stage not nearly as large and embellished as the “main stage,” it remained pack all weekend long.

Buku wasn’t done there exhibiting musical and artistic acts; there were also two indoor stages to explore within the festival. One of those being a Mardi Gras parade float themed party, inside a warehouse dubbed the Float Den. Buku brought one of the city’s most iconic celebrations directly inside the festival. The other indoor stage, the Ballroom Stage, played host to some of the weekends biggest names in Hip-Hop such as current favorite A$AP Ferg and the legendary rapper Mystikal. With so many options, you were surprised how rarely you saw open room no matter the stage or slot time.

On Friday Tchami threw down a super groovy set that got everyone in the mood to dance the night away in the New Orleans warmth. Above & Beyond was also on the Friday schedule and is an obvious can’t miss performance for any avid electronic music listener. As expected the group put on an emotion riddled set and some Group Therapy was served to the New Orleans community. Kid Cudi’s performance was one of the top highlights of the weekend and for good reason. He has been performing for some time, and truly is a master of his craft. He’s one of the rare performers who knows how to keep the crowd energized and engaged while spreading the message of peace, love, and positivity. A lesson that transcends across all aspects of life, not solely music.

Day one was exhilarating and quite the experience but this couldn’t stop the majority of the festival from heading over to the BukuLATE: ALL*STARS after party at the Joy Theater. The post-festival after party provided attendees with a once in a lifetime experience. The after-hours event was an evening of improvisation and collaboration. What would one expect when you have headliners Pretty Lights and Griz in the same no rules environment? It resulted in a night of spontaneous jam sessions and exchanges.

With slight overcast and early sprinkles of rain, the event cleared up in the early evening giving Saturday a cooling night to end Buku with a bang. Future put on a performance that had caught the ear of various attendees, bringing together fans of all genres. It had everyone dancing and singing along more so than any other set of the weekend. Right around dusk Le Youth provided the perfect late evening set at the Back Ally. With the smooth house tunes of Le Youth in front of the sunset reflection on the Mississippi River, you knew this was a one-of-a-kind moment.

One of the most anticipated sets of the weekend was the Pretty Lights Saturday set with his live band ensemble. The group put on a mind-blowing set playing live variations of his funky electronica music. With the combination of mesmerizing lasers and dense fog to flash through, the performance was the climax of the festival. Aboard the S.S. Buku VIP members were given a three level boat featuring multiple bars and an exclusive stage. With a smaller audience and secluded stage, Autograf gave one of the most personal performances one might have the luck of ever enjoying. The avid fans danced across the open floor to classics and new tracks from Autograf’s newest EP, ‘Future Soup.’ Nero closed out the Float Den, and the excitement couldn’t be contained within the warehouse. The UK group shut down the festival on the highest note possible and received every last ounce of energy left in the New Orleans crowd.

Buku 2016 was a great success showcasing one of the nation’s most vibrant nightlife scenes with its ever-changing art installations, the BUKUlture tent, and authentic cuisine. The festival did an amazing job submersing travelers in New Orleans culture right within its own walls. The lineup featured a fantastic selection of big-name EDM producers and Hip-Hop artists, while still managing to separate itself from every other festival. From celebrating along the Mississippi in the warm spring weather of Louisiana, to partying in one of the various after-hours celebrations; Buku 2017 will surely be a festival you have to experience yourself.