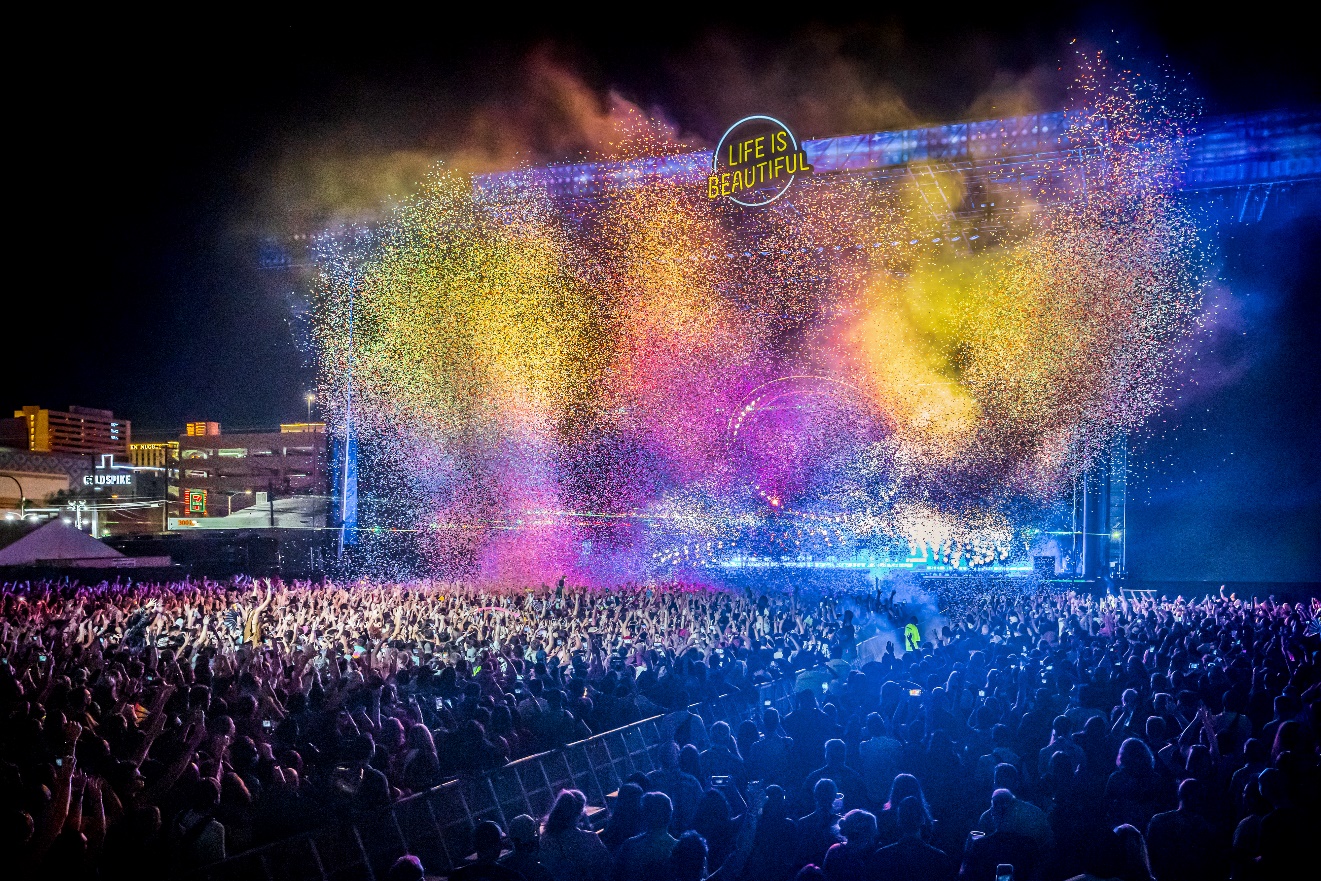 Life Is Beautiful 2021 Las Vegas was a spectacular return back into LIVE music, as the festival catered to a plethora of fantastic performances, art installations, food, comedy, and more. The festival excitingly made its way back to Downtown Las Vegas, with attendees immersing themselves in everything that Life Is Beautiful had to offer.

On day one, the Fremont Stage was transformed into an EDM lover’s paradise, with crowds coming together to experience electric performances from Shiba San, Lost Frequencies, CloZee, and San Holo. The Downtown Stage served perfectly for a star-studded lineup of performances from the likes of LANY, Glass Animals, and Tame Impala. One of the most popular stages was the BACARDI Stage, where crowds had arrived early to see up-front performances from Willow Smith, Don Toliver, and crowd-favorite, Megan Thee Stallion. Jammcard and Life Is Beautiful was able to go public with five-time GRAMMY winner, Jacob Collier, who brought out T-Pain as a surprise guest.

Day two took no time to rest, as it welcomed attendees with another day of great music, bringing out EDM acts like Cash Cash, Dillon Francis, and J.I.D. The BACARDI Stage proved to be a hot location, as crowds gathered for sets from Earthgang, Ludacris, and Illenium. Highlighting the day was Green Day’s nostalgic headlining performances, while the shared Downtown Stage also featured high-energy performances from Surfaces, Modest Mouse, and HAIM.

The festival officially ended after its third day, celebrating love, life, and beauty. Festival-goers were able to enjoy a wide range of entertaining and memorable acts, having the opportunity to witness acts like Keys N Krates, Ekali, and more. The Fremont Stage was taken over completely by show stoppers Surf Mesa, LSDream, and Gorgon City, accumulating oceans of people within its crowds. The BACARDI Stage was constantly filled to the brim with acts like Emotional Oranges, St. Vincent, Young Thug, 6lack, Fisher, and A$AP Rocky. Billie Eilish stunned fans and her crowd as the headlining act, performing an angsty and energetic set full of her beloved tunes and new album tracks including “Happier Than Ever,” “Oxytocin,” “NDA,” “Lost Cause,” “Your Power,” “Didn’t Change My Number,” and “Billie Bossa Nova,” among others, at The Downtown Stage.

Alongside the performances, those looking for a laugh gathered at The Kicker Comedy Club located in Venue Vegas. There was a complete lineup of amazing acts over the span of the weekend, which included the likes of Sarah Cooper, Sam Jay, Trevor Wallace, Annie Lederman, Brady Matthews, Sibling Rivalry: Bob the Drag Queen and Monet X Change, Sarah Cooper, Sam Jay, Marcella Arguello, Whitmer Thomas, and two live podcast tapings from Jackie Schimmel’s The Bitch Bible and Stiff Socks with Trevor Wallace and Michael Blaustein. The stage also turned down its lights for one of the evenings, hosting a wild Y2K dance party.

Life Is Beautiful 2021 catered to all tastes and flavors of entertainment. The festival was able to provide memories for its attendees this year, while the festival always leaves the city of Las Vegas, more beautiful from where it arrived. Fans can look forward to its return in 2022, as this year, the festival kicked off with an unforgettable celebration of life and beauty. With so much amazing activities, performances, positivity, and great vibes, Life Is Beautiful is a go-to festival, perfect for anyone who wants to simply have a great time and enjoy life.