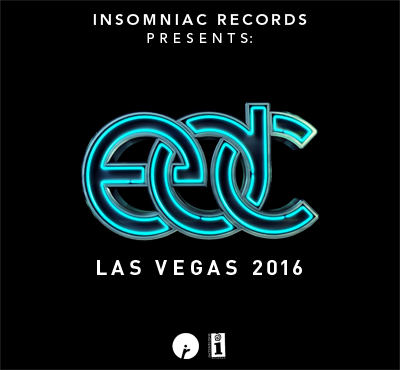 The 20th anniversary of EDC Las Vegas has Pasquale Rotella and the Insomniac team going all out and for good reason. Electric Daisy Carnival has taken dance music and festival culture to new heights in the 20 year uprising. A name synonymous with the world’s finest dance music gatherings, dance music fan or not, chances are you know what EDC is. Another surprise has been dropped on headliners in anticipation for this year’s EDC Las Vegas 2016.

After a successful EDC NY experience this past May, all eyes are now focused on the crown gem, Electric Daisy Carnival Las Vegas. EDC Vegas is literally right around the corner and attendees have already been spoiled without even touching the Las Vegas Motor Speedway grounds yet. Insomniac Records and Interscope Records will be releasing a full length compilation record this Friday, June 10, to hold you off until the June 17th extravaganza begins.

Insomniac Records Presents: EDC Las Vegas 2016 will be a 24 track showcasing the stacked lineup of artists appearing at this year’s EDC Las Vegas. New tracks will be featured on the album by artists like Seven Lions, Brillz, Slander, and more. The premier track to be released off the album is “Peach Patch” by Gladiator and Two Fresh. Insomniac founder and CEO Pasquale Rotella had this to say about the compilation record:

“I am excited to announce the long-awaited return and relaunch of Insomniac Records this summer. And what better way to kick things off than with a special EDC Las Vegas compilation, showcasing some of the artists performing at the Insomniac Records stage for our 20th anniversary. Featuring work from producers like 12th Planet, Rusko, UMEK, and Slander, it’s the perfect mix to get people hyped for the festival.”