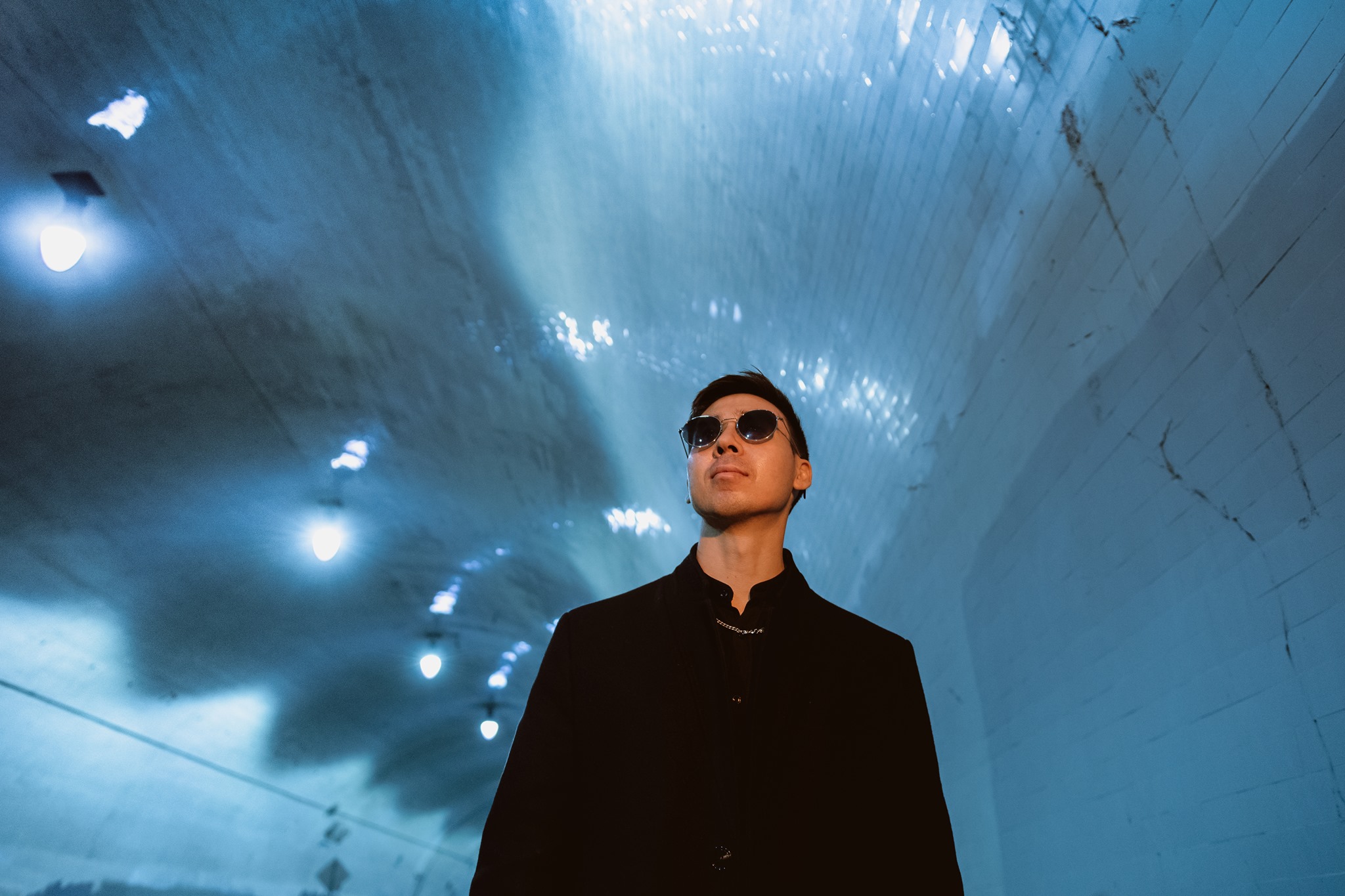 LA-based electronic music producer Rinzen continues to impress listeners (including us) with his otherworldly, techno-driven ensembles. With a sound unlike any other, the forward-thinking musician has revolutionized electronic music as we know it and has opened up a whole new horizon of unthinkable soundscapes for music lovers across the globe to indulge in. Despite all odds, the past year has presented nothing but tremendous success for Rinzen, and we’re certain the stars will only continue to align in regards to his blossoming music career moving forward.

Throughout the past couple of months, New York City’s underground music scene has seen more of Rinzen than ever before, and we’re totally here for it. From his grand Cityfox Regenerate debut at The Brooklyn Mirage back in July to his first-ever performance at Electric Zoo this past weekend, the flourishing DJ/producer is pleased to finally cross off playing at these venues from his list of accomplishments. Whether the sun is shining bright on your skin during a daytime festival environment or you begin to lose track of time at a more intimate nightclub ambiance, Rinzen never fails to throw down absolute bangers and impress the crowd with his captivating, soul-stirring mixing expertise.

This past Labor Day weekend, Electric Zoo was honored to welcome Rinzen to their jaw-dropping roster of incredible performers, and it was a breath of fresh air seeing more underground talent perform at one of the most renowned music festivals in the nation. Rinzen’s 4:30 PM debut Electric Zoo slot at the newly renovated Hilltop Arena stage on that Saturday was nothing short of magical as he flawlessly intertwined melodic percussions with that driving, cinematic techno sound of his we just can’t seem to get enough of. Whether already a Rinzen fan or not, everyone in the crowd seemed to genuinely resonate with his visionary live soundscapes.

Lucky for us, we got to chat with the inspiring musician ourselves following his exemplary Electric Zoo performance, and it was admirable getting the opportunity to gain more insight on the backstory behind his artistic persona and career-driven endeavors. Read on to fully immerse into Rinzen’s unique world full of purely ethereal musical creations and a forward-looking artistic vision unlike any other.

The Nocturnal Times: Thanks so much for having us! Your set was incredible! How does it feel to be playing Electric Zoo this year?

Rinzen: It feels amazing! I feel like Electric Zoo is one of those American festivals that you always hear about and it feels incredible finally making my way over here and getting to perform at it. I’m honored to be representing more underground music at a slightly more commercial festival.

The Nocturnal Times: Your set here at Electric Zoo was a daytime set, but you’re highly-recognized for your underground, extended nightclub sets. How do you decide what specific sound style to incorporate during your live sets based on your slotted performance time and setting?

Rinzen: Typically, I think about the time of day I’m playing at and the location, scenery, etc., but coming into my performance today here at EZOO, I honestly had no idea what to expect and didn’t really plan or prepare anything. I just wanted to come in, dance, and hop around the festival myself to get a feel of the crowd before my set before choosing how to go about my performance.

The Nocturnal Times: Is this your first festival back since before the pandemic?

Rinzen: It is, yes. It sure feels good to be back seeing so many people in an outdoor festival setting. Festivals are actually a bit harder performance-wise for me sometimes because the sets are usually shorter. I feel like the crowd is typically expecting bangers and heavier tracks the entire time and it’s hard to incorporate the magic of it all in a one hour set.

The Nocturnal Times: So would you say you prefer a more intimate, 5-hour set club set over a festival performance?

Rinzen: I think I do, but festivals have their own kind of unique energy that I really enjoy as well. When it comes to playing festivals, I always think of what my friends and I would want to hear live in that type of environment, and that’s kind of how I choose what tracks to incorporate as well. Hence, why I mixed in a Lana Del Rey track during this EZOO set!

The Nocturnal Times: Every artist has a dream music festival they hope to someday debut at. If you could play at any music festival in the world, which one would you choose?

Rinzen: Wow, good question! Hmmmm Damian Lazarus has this festival called Day Zero and playing that in Tulum would be an absolute dream. I feel like the crowd at his events are simply there for the music and in a way I feel like that type of sophisticated crowd just seems to understand my music more in depth.

The Nocturnal Times: What have been your most memorable performances of 2021 so far?

Rinzen: Playing Cityfox Regenerate at The Brooklyn Mirage for their opening weekend back in July was definitely the most memorable. I think that was just that type of perfect scenario of having the right set time, right stage selection, and right audience. When all those things align, this explosive energy occurs and its just magical. It’s hard to replicate moments like that and I’ll never forget the energy in the air that night.

The Nocturnal Times: You just recently opened for Lane 8 during his Brightest Lights tour stop at the Brooklyn Mirage, can you tell us more about that experience and your relationship with him and his This Never Happened label?

Rinzen: I’ve been a big fan of his and aware of his music since he got started on Anjunadeep a while back. When he started doing his mixtape series, I figured I’d send him some of my music, and he’s been so supportive of my ideas and sound since. Our relationship just kind of developed over time, and when I wrote “Some Good Here” during quarantine, I was trying to figure out who I’d want to release the song with. This Never Happened just seemed like the perfect fit. The stars aligned and we released the song on TNH and then he asked me to open for him during his Brightest Lights tour, which I loved to be a part of because I got to showcase my deeper and more melodic side.

The Nocturnal Times: Aside from This Never Happened, you’ve also released tracks on prominent labels like mau5trap, Desert Hearts, and more. Which imprint would you say you have the closest relationship to?

Rinzen: I’ll always be grateful for mau5trap since they really ignited my start in the music industry and helped build my career. Recently, I’ve gotten extremely close with the guys from Desert Hearts and its just amazing to have a friendship with the people you work with. I’m always looking to evolve and grow as an artist, and I’m excited to form even more rewarding relationships moving forward.

The Nocturnal Times: In my opinion, you have one of the most unique sounds in the electronic music industry today. If you could, how would you describe your signature sound in one or two words?

The Nocturnal Times: What made you want to create this specific cinematic, techno-driven sound to begin with?

Rinzen: I think it was a consequence of growing up in Los Angeles and falling in love with film and literature and just becoming interested in all these deeper stories and art forms. When I decided to approach music, it just felt right to want to incorporate all those artistic concepts into my creations.

The Nocturnal Times: When it comes to creating music, what would you say is your biggest form of inspiration?

Rinzen: Honestly, everyday life experiences. Traveling, meeting people, performing at different venues and walking around cities I’ve never been to, its those little but meaningful things that spark inspiration in me.

The Nocturnal Times: What are you looking forward to the most during the last few months left of 2021?

Rinzen: After I leave NYC I’m playing an extended 5-hour set both in San Francisco and Chicago next weekend which I’m super excited about. I’m also stoked to play at Seismic Dance Event in Austin later this Fall as well since its such a big techno festival!