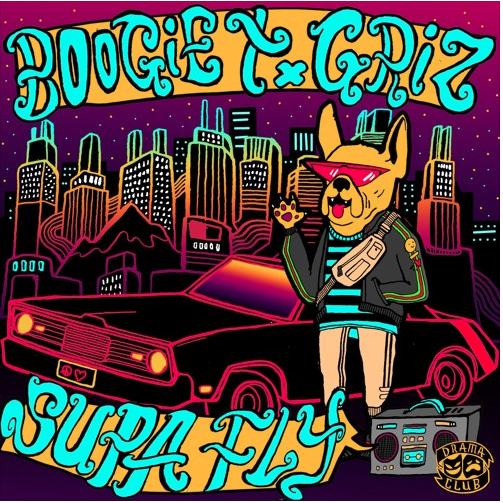 Hot off the success from his recent Ride Waves album release, GRiZ is back again with a boss collaboration beside Boogie T on their Supa Fly EP, out now via Drama Club Recording.

Calling on Rusko, Gentlemens Club, Dirty Monkey x Jantsen, and COM3T for some rad renditions of the track, the EP binds together nicely with several unique spins on the original cut. Released on Boogie’s own Drama Club Recordings, the collaborative pairs the original “Supa Fly” with remixes from the aforementioned global dubstep legends. Of course in time for festival season which is now underway, the track is no doubt going to continue through the circuits at a fest near you this Summer so keep your ears out for this expert banger.

As longtime friends and brothers in the bass music scene, GRiZ and Boogie T now deliver “Supa Fly” as a piece of each of their masterful styles in one. Putting forth both the dance floor oriented sound on which Boogie T has built his name, as well as the industry-leading sound design and arrangement skills GRiZ consistently demonstrates, the track is built with a bang and packs precision at every turn.

Showcasing the talents of some of dubstep’s most celebrated artists, the EP ranges from Rusko’s signature anthemic leads to Gentlemens Club stabbing urban horns and muddled low end, to Dirt Monkey and Jantsen’s saxophone charged intro, to COM3T’s deeper, saw wave rework. Adding to the overall package, illustrator and animator Josh ‘Kooz’ Stewart brought forth a colorful cover for the equally vibrant album, as well as an animated video for the original mix. A staple member of Drama Club Recordings, Kooz’s creative works are also art forms to keep your eyes peeled for moving forward. Watch his “Supa Fly” vision come to life below:

If you’re in need of more new new from GRiZ after jamming to Supa Fly, take a listen to his Ride Waves album, which dropped in full on April 5 and features collabs beside vets like Wiz Khalifa, Snoop Dogg, DRAM, Matisyahu and more. Since dropping, the album has received support from major players like i-D, Billboard, Forbes and beyond. Still need some more? Luckily for you, GRiZ is hitting stops across North America and Europe for the remainder of the year on his live album tour which is a do not miss. If you haven’t had the chance to catch him live, you absolutely need to hop on this tour and witness the magic for yourself. More info & tour dates for the Ride Waves Tour here.