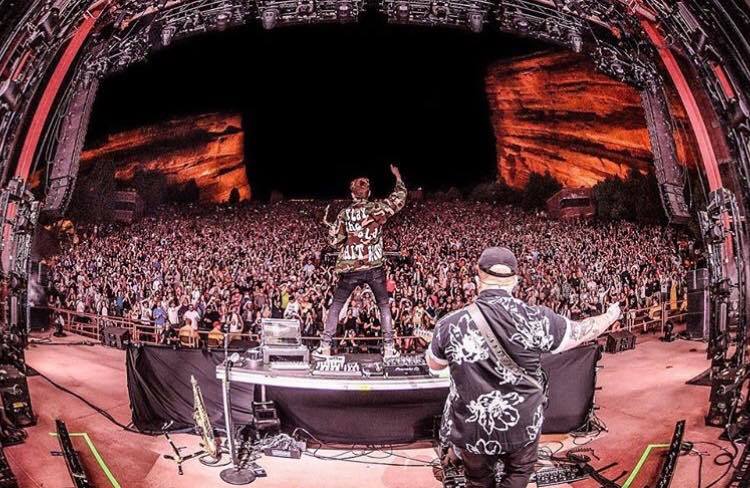 With the return of live music comes a massive return for future-funk artist GRiZ on September 6th in Morrison, Colorado. For a one night only event at the world-renowned venue, Red Rocks Amphitheater, the producer and DJ will play a special performance for his beloved hometown. Playing an epic three-part set, each section will be unique in their own sound and delivery. Tickets and shuttle passes are on sale here for this electric Labor Day event.

Originally hailing from Detroit, GRiZ has taken influences from American funk, golden-age hip-hop, and dance music to create his own sound in which he calls “Future Funk”. His tracklist utilizes unique synths and melodies containing everything from live saxophone, vocals, and heavy dubstep bass.  This year alone, the DJ and producer has released chart-topping collaborations with Elohim and Ganja White Knight, as well as three singles, “Tie-Dye Sky”, “Vibe Check” and “Astro Funk”. Known for his versatility across genres and styles, GRiZ will play three high-energy performances in one incredible night. Beginning with his laidback Chasing The Golden Hour style set, progressing into a fan-favorite ‘10-’17 set, and closing out with his insane Full Flex bangers-only exhibition. GRiZ fans can expect to hear nearly all his discography, with new releases under his belt as well. With his upcoming “GRiZMAS In July” double-header in Wilmington, North Carolina and “Another World” at Denver’s 1st Bank Center already sold-out, tickets for this legendary event are sure to go quickly.

With a rollercoaster of sounds and next-level production amongst his sets, GRiZ continues to deliver performances that take a step up each time. With a beautiful summer on the horizon for Colorado, this hometown set will give fans memories of a lifetime under the stars at Red Rocks. The town of Morrison offers beautiful views of both the mountains and the forest, with a quaint city center for attendees to shop and dine at. For those commuting from Denver, shuttle passes are also available with two different pick up and drop off locations.

Related Topics:coloradogrizRed Rocks Amphitheatre
Up Next