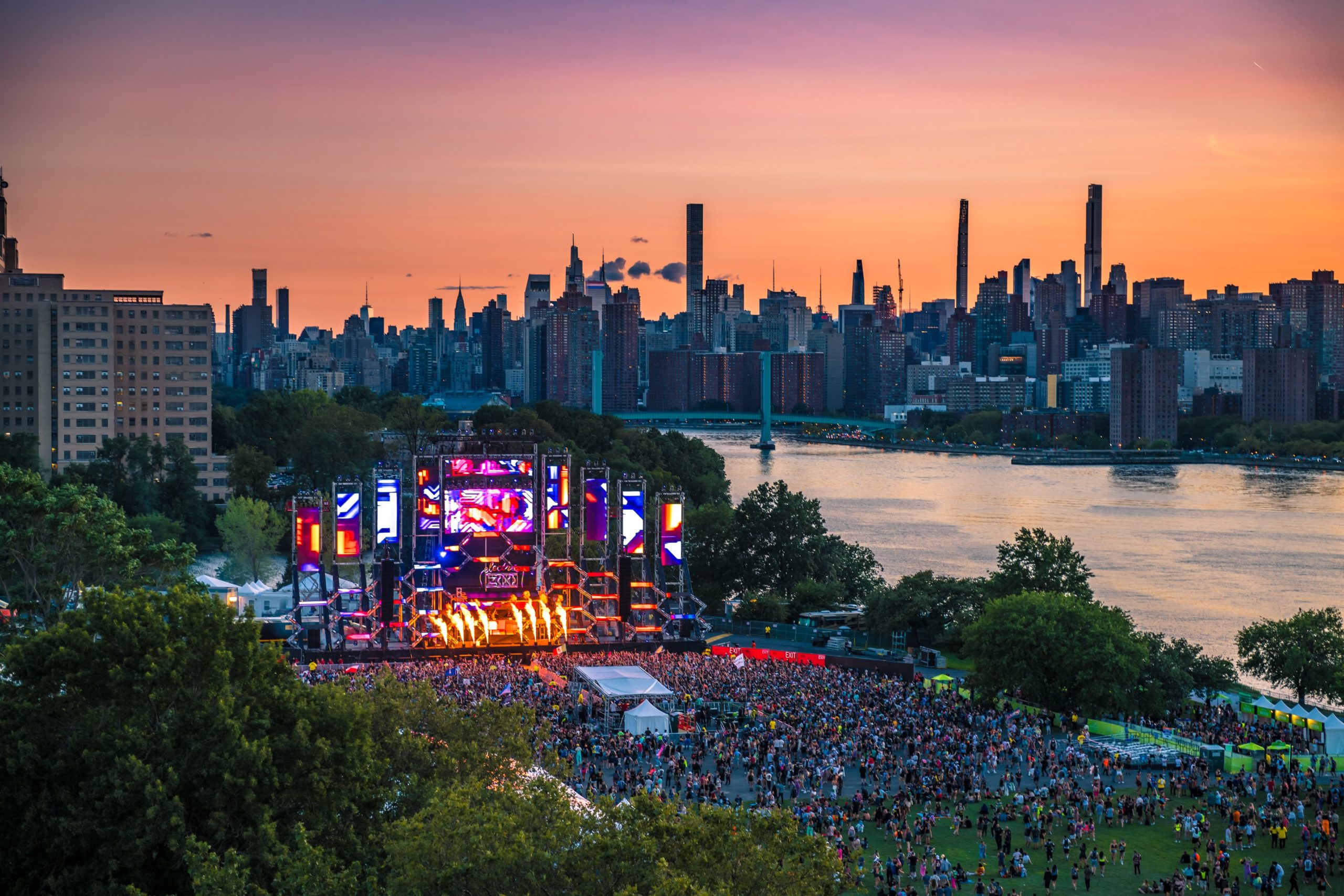 After catching dozens of performances throughout EZOO this September, the abundance of thrilling sets and treasured memories are simply unbeatable. When it comes to raking in top-tier electronic artists, no one does it quite like EZOO. Sifting through a grandiose array of talent from across the board like Alesso, Alpha 9, Ekali, Fisher, Zeds Dead, Audien, Dr. Fresch, Kaskade, Adventure Club, Loud Luxury, Sonny Fodera, Steve Aoki, and TONS more, The Nocturnal Times is recapping a handful of standouts over the weekend. Read on to catch some of our most memorable sets of New York’s electronic music festival, EZOO 2021.

If you have ever seen Rezz live, you know that she quite literally brings the heat each and every time. Never a dull moment and never anything less than unforgettable, each performance has a unique way of ringing throughout your entire body, surging through your soul. Her Saturday night EZOO Main Stage set shook the foundation of Randall’s Island and beyond, captivating the massive crowd with hypnotic beats, buzzing chirps and demonic flair. Blazing pyro framed her swaying body and gyrating eye goggles in the booth. Her mesmerizing energy radiated thousands of people deep, leaving an imprint only those who have seen her live can truly understand. Beloved tracks like “Relax,” “Edge,” “DRUGS!,” “H E X” and more had the crowd begging for more while newer releases like the sensual “Taste of You” featuring girlfriend Dove Cameron sparked interest with the risque music video plastered across the Main Stage. This was just the right set to let loose to and leave a lasting impression, in true Rezz fashion.

When it comes to holding down the main stage like a true legend, no one quite compares to Tiësto. Commanding thousands of die-hard fans to his performance, Tiësto delivered 360 degrees of classic energy for New York to pour its heart and soul into. Mixing in his recent smash records like “The Business” and “Don’t Be Shy,” the crowd was delighted even further by his sensational classics like “Red Lights,” and “Split” and couldn’t help but throw every ounce of energy possible into records he dropped including Avicii’s “Levels,” HARBER’s brand-new single “Feelings After Dark,” and his recent hit remix of James Arthurs’ “Lasting Lover” alongside Sigala. It’s performances like Tiësto that remind us all of the pure joy and love that dance music is all about, and yet again he knocked this one out of the park.

Kicking things off at the main stage on Saturday was rising talent out of NYC, HARBER. Following his massive “Feelings After Dark” collaboration with Michael Calfan ft. NISHA on Musical Freedom, HARBER took to the main stage to showcase one of dance music’s biggest tunes of the year, as well as a slew of his other originals, remixes, and mashups. In addition to his own catalog, HARBER debuted his latest release “Count You In,” which just dropped on Spinnin’ Records’ SOURCE, featuring Robbie Rosen and co-written by pop music go-to, Ferras, best known for his work alongside Katy Perry, Dua Lipa, and The Chainsmokers, among others. HARBER later serenaded the city with a second set in the evening when he joined Audien and Zack Martino for the official EZOO Supernaturals after party at Webster Hall.

No stranger to the festival main stage, Galantis made their return to EZOO this year with another memorable performance. With three big albums already under their belt, the pair have plenty of original music as well as remixes to keep the party going and the crowd on their feet for hours. Fitting some of their biggest tunes into a festival-style set has become their specialty, which is why if you were at the main stage for their set on Sunday, you would have heard their 2021 smash “Heartbreak Anthem” with David Guetta & Little Mix, as well as their classic tunes “Runaway (U & I),” “Peanut Butter Jelly,” “You,” “Love On Me” with Hook & Sling, “Gold Dust,” “No Money,” and plenty more. Always high energy, Galantis never disappoints with their seamless live sets, which is why we had to name them one of the most memorable from EZOO 2021.

For those who were over at the Sunday School stage on closing day, there was one guy who stole the show in the most electric fashion possible. For everyone who’s experienced a live set by Drezo, they’ll be no stranger to the kind of magnetic charisma and irresistible stage presence he has. There are just some artists out there who have a natural ability to send blood-pumping rhythms through people’s veins, and Drezo remains atop that pyramid of artists. Lest we forget two of his most notorious songs he threw in, “Heaven” and “Guap,” to say the crowd went absolutely crazy doesn’t even do the moment justice. Drezo boasts the perfect balance of moody bass, adrenalizing drops, and riptides of high energy, and he delivered yet another 10/10 performance at EZOO this year.

Another one for the books during this recent rendition of Electric Zoo was Seven Lions’s mind-altering set at the Main Stage on Friday night of the festival. As per usual, the brilliant DJ/producer absolutely destroyed the crowd in the best way possible with his iconic mixing skills throughout his entire set. Ranging everywhere from progressive house, psytrance, melodic dubstep and heavy bass-driven drops, the Ophelia Records king had no shame delivering it all. Seven Lions never fails to disappoint fans during his live performances as he intertwines all-time favorites like “Strangers,” “Only Now,” “Returning To You,” “Freesol” (Blastoyz Remix), “Island,” and more with other captivating electronic bangers. Oh, and witnessing the entire crowd sing “First Time” in unison for the first time in two years was absolutely magical. The energy in the air was unmatched, the crowd’s vibes were immaculate, and the music that blasted from the intricately designed main stage was striking, to say the least. Those three things combined sure make for a memorable set, thank you Seven Lions for ending day one in the best light possible.

Starting the show on Friday afternoon was breakout DJ/producer MIME. Always mysterious, MIME delivered a 20-track main stage ensemble that had us moving from the very beginning. With EZOO’s return to Randall’s Island this year, following a year off in 2020 due to the pandemic, the MIME made sure to kick things off in proper festival fashion, showcasing tracks from MK, CamelPhat, Duke Dumont, and his own “Young Hearts” with GT_Ofice ft. Linney, who joined the masked DJ on stage for a live festival performance to get the party started this past Labor Day Weekend. Also included in MIME’s EZOO set were two festival go-to’s this year, “Love Tonight” by Shouse, and “Do It To It” by ACRAZE. If you weren’t at the main stage for MIME, you can now listen to his main stage set, which was broadcasted on SiriusXM.

Any surprises here? What played out to be arguably the weekend’s highest attended set, was the most beautiful ending to sail out of the weekend to. Of course all weekend long and Sunday in particular there were countless Illenium jerseys running around the festival grounds. Ever present and widely beloved, Illenium plays a special role in many electronic dance enthusiast’s hearts. His heartfelt songs and bass-heavy drops set the tone for the closing set while fireworks and pyrotechnics gave it some flair. What would an Illenium show be without classics like “Crawl Outta Love,” “Good Things Fall Apart,” “Take You Down,” “Takeaway,” and the “Without Me” remix? More recent releases including “Paper Thin,” “First Time,” and “Nightlight” made the cut as well. Such feel-good energy circulated throughout the thousands in attendance, bonding everyone together even if just for one brief night. The crowd really came together for this performance and jammed out through the last hours of Electric Zoo, sending it off in nostalgic bliss.