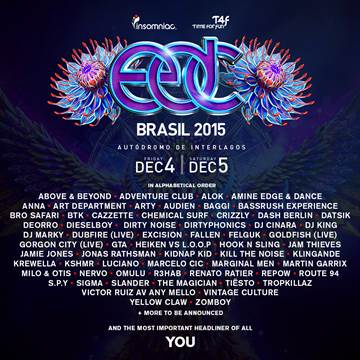 Insomniac Events and Time for Fun (T4F) have announced the massive talent roster for the inaugural Electric Daisy Carnival Brazil. The first-ever EDC Brazil makes its debut on Friday, December 4 and Saturday, December 5 at the Autódromo de Interlagos in São Paulo.

More than 60 artists will travel to South America to perform at EDC Las Vegas, including electronic dance music (EDM) heavyweights Tiësto, Above & Beyond, Martin Garrix, Krewella, NERVO, Deorro, Gorgon City, and many more.

“I feel so fortunate to be able to make one of my longtime dreams come true by bringing EDC to the beautiful country of Brazil,” said Pasquale Rotella, Insomniac Founder and CEO. “The energy in São Paulo reminds me of the positive vibes here in SoCal, and I can’t wait to deliver a new experience to our international Headliners!”

The soundtrack to your EDC Brazil getaway starts here:

The annual Electric Daisy Carnival in Las Vegas has earned its stellar reputation as one of the biggest and best music festivals in North America—and even worldwide. The worldwide phenomenon lands in Brazil with its notorious kineticCATHEDRAL, neonGARDEN, and bassPOD stages. Fans can anticipate larger-than-life visuals, state-of-the-art lasers, mind-blowing pyrotechnic displays, and much more.

EDC Brazil will also present three of Insomniac’s signature Art Cars, including El Pulpo Mechanico, the classic Pushing Daisies, and EDC Brazil’s reimagined rendition of the boomBox, which will roam the festival for all fans to enjoy. Fully equipped with Ferris Wheels and high-flying swings, the carnival-like atmosphere promises a uniquely unparalleled experience.

Two-day general admission and VIP tickets are available for purchase beginning at $190 USD (R$660) and $390 USD (R$1360) respectively. Layaway plans are available for all ticketing options and can be paid in 3 interest-free installments. Fans can visit http://brasil.electricdaisycarnival.com/en/ to purchase tickets online.